In publishing this column the past five years, we have profiled nearly every significant hot rodder we could think of. But we missed one: Pete Eastwood, the peerless behind-the-scenes craftsman who helped pull together some of the most notable rides ever created.

Peter Eastwood was born in 1951 in Pasadena, California. From a young age young Pete was captivated by automobiles, in no small part because his father, Douglass Eastwood, was captivated as well. The senior Eastwood ran a neighborhood garage and was active in the Horseless Carriage Club, devoted to pre-1915 cars.

Young Pete would watch his father completely disassemble the “brass-era” cars and put them back together. He would pay close attention, gaining knowledge he would use later in his chassis business. It also meant his car-guy pursuit was genetically ordained. He learned to drive at age 9 in a 1905 Ford Model T. Pete had more going for him than DNA. He lived within shouting distance of Blair’s Speed Shop in Pasadena. At the time Blair’s was the epicenter of SoCal’s hot rod scene; countless numbers of distinguished hot rodders started their careers at Blair’s. And eventually Pete Eastwood would become one of them.

Pete’s first exposure to Blair’s, though, started in grade school. “We had a little Radio Flyer wagon and my dad would load pistons, rods, and flywheels in it,” he recalled to historian Dick Martin, “and we’d walk over to Blair’s to get them balanced, towing the wagon.”

Blair’s shop put the pesky kid to work. He was 11 years old. Polishing Halibrand wheels and dobbing paint on the raised lettering of tires was his specialty. Hanging out with dad also meant he had learned mechanical skills – assembly, disassembly, even welding. He put his talents to use building minibikes, racing karts, and fiddling with his dad’s garage full of Model T parts.

During high school Pete scored an after-school job at a local boat shop, commuting behind the wheel of a Ford ’29 highboy on Deuce rails. It was during this time he discovered his true calling. “My father would take me to sprint car and drag races.” he recalled. “In the pits I would study all the chassis construction. Engines didn’t interest me, chassis did. I knew then I wanted to be a fabricator.”

He worked part-time at Blair’s until 1971 when Uncle Sam informed him to report to duty. Luckily for Pete, a change in the war’s direction sent him to Korea instead of Vietnam. In 1973, he returned to Blair’s. There he met another soon-to-be famous Pete, Pete Chapouris. When Chapouris left Blair’s to start Pete & and Jakes with Jim Jacobs in 1974, Eastwood toiled at Blair’s by day and Pete and Jake’s by night. By this time, Eastwood’s chassis building skills and reputation were flourishing, inspiring many rodders to seek out P-Wood for suspension repair and adjustment.

In 1978, Eastwood opened his own business. He never lacked for customers. For the next couple of decades, Pete moved through nearly every aspect of rodding and motorsports. He built numerous drag cars and dry lakes racers (just missing the 200mph Club by a scant two miles per hour). He even kept up with the horseless carriage crowd, helping to keep all those ancient Ts humming.

Race car restoration also became a niche he excelled at. Eastwood restored vintage drag cars – including one of Ed Pink’s rails – for the “cackle” devotees, and two prominent Indianapolis 500 cars, including Louis Meyer’s 1933 winner and the 1959 Eddie Kuzma roadster that Eddie Sachs piloted to a 17th place finish. In a recent conversation with the Goodguys Gazette, Eastwood, who still lives in Pasadena, reflected on his career. “I’ve been very lucky to have been involved with so many cool cars, particularly the restored drag cars. Also proud of receiving the Stroker McGurk award,” he said. 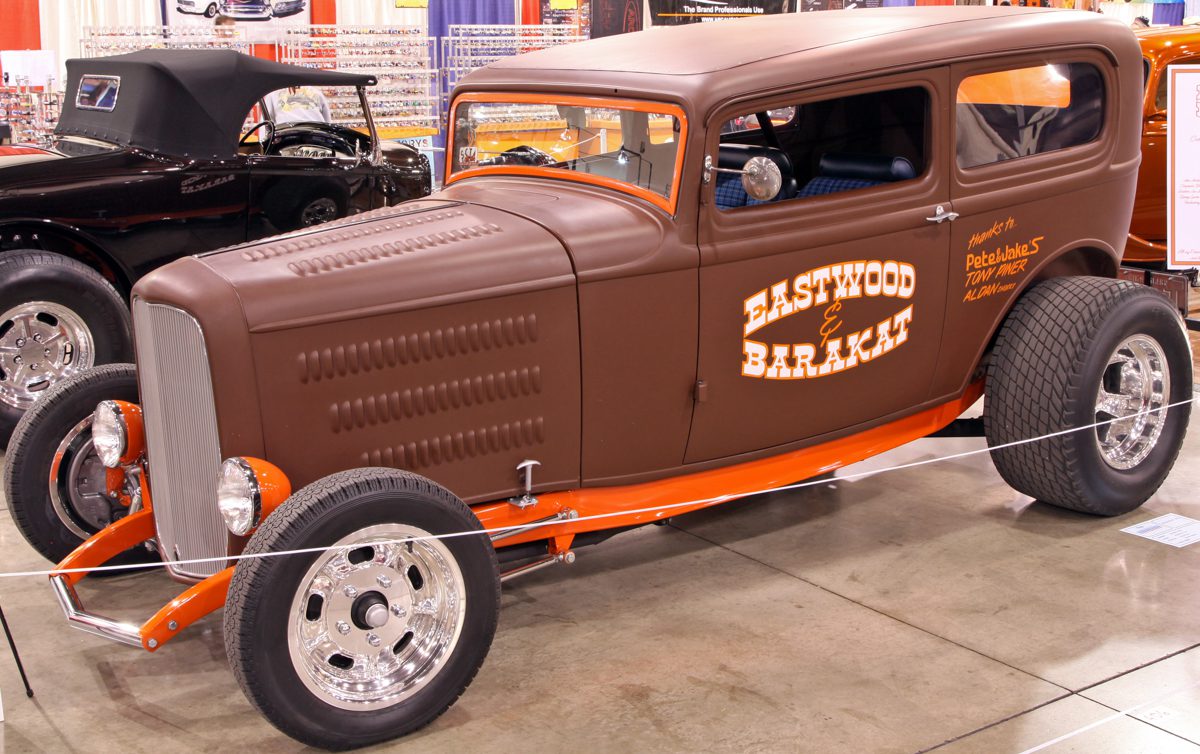 He also marveled at his impact on so many famous ’32 Ford hot rods. “When Ford Motor Company compiled a list of the 75 Most Significant ’32 Fords, I realized I had worked on 18 of them. And I remember walking through all of the 400 ’32s displayed at the Petersen Museum celebration of the model’s 90th anniversary. I was surprised I had worked on 48 of them.”

Throughout our journey profiling our sports legendary personalities and hot rods, it’s safe to say that Pete Eastwood’s impact on the construction of so many notable rides is unparalleled. For Pete, the simplicity of hot rodding is its appeal.

“Despite the high-dollar designer rods of today, at its core, hot rodding is a grassroots hobby, he said. “It’s about making cars look better and go faster.”

As the cliche goes, ’nuff said.