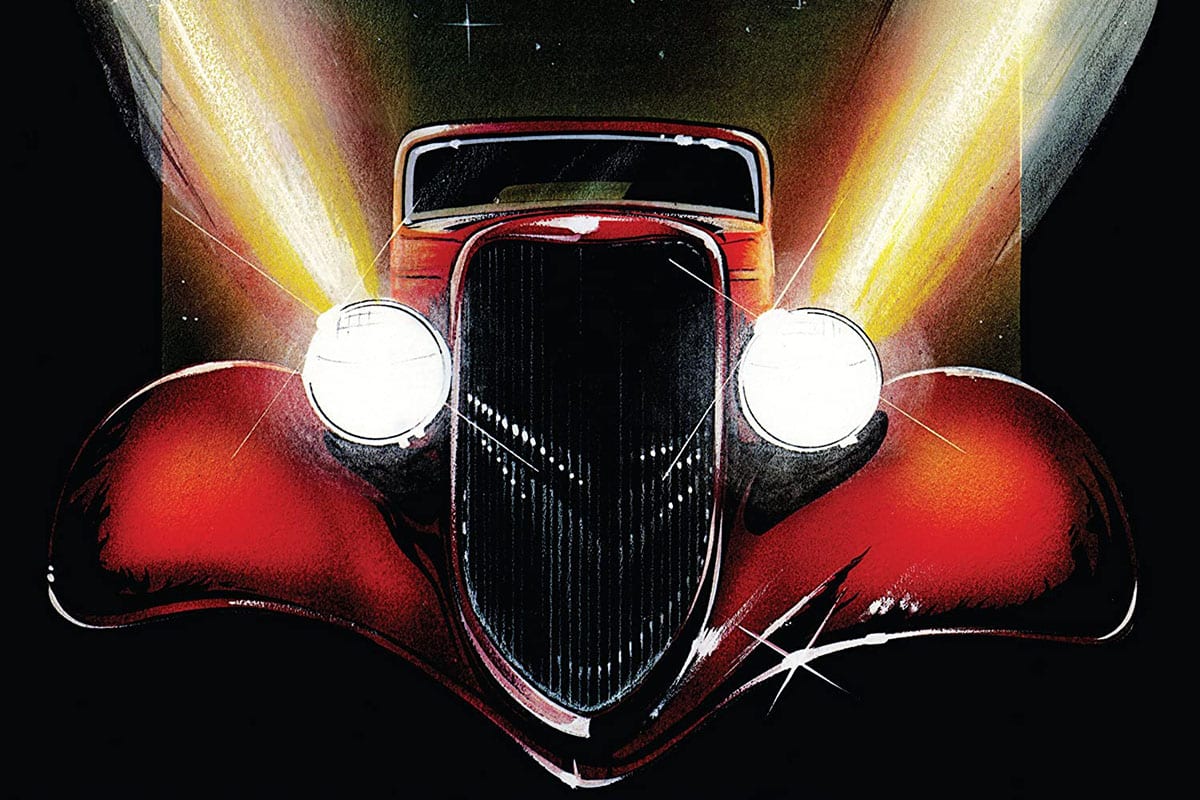 The Eliminator Coupe: The Hot Rod that Captured the MTV Generation

There are plenty of famous hot rods – the Niekamp roadster, the Pierson coupe, the Buttera tall T. We could go on and on. But few hot rods have reached across the pages of automotive buff books into the imagination of the general public. One that did was the Eliminator Coupe, the vivid red, graphics-adorned ’33 Ford coupe built of Billy Gibbons and the Rock and Roll Hall of Fame band ZZ Top. Guitarist Gibbons was always a “car guy,” with a lifelong fascination with hot rods. When he saw Martin Sheen’s uber-kool ’34 coupe in the 1974 film “California Kid,” he knew he had to have one. Gibbons had met the Kid’s owner, the legendary Pete Chapouris (of Pete & Jake’s fame) a few years earlier at the East Coast Street Rod Nationals. “That’s when we decided to construct this little red hot rod,” Gibbons recalled. Gibbons located a donor ’33 Ford from a woman in Tucson, who bought it new, then parked it, which is where it stayed – pristine and untouched – until one long-bearded rock ’n’ roller snapped it up quicker than an ear-shattering guitar solo. It would be five long years before the car was completed.

With the well-connected Chapouris overseeing the project, it wasn’t long before a cast of hall-of-fame hot rodders agreed to join the effort. First, Chapouris and Gibbons decided that the well-regarded Don Thelan’s Buffalo Motor Cars would do the majority of the work, with guidance from Chapouris.


Since Gibbons had every intention of driving the car, mechanical reliability was essential. The coupe rolled atop a straightforward Pete & Jake’s chassis – dropped tube axle and four-bar suspension and a Ford 9-inch rear out back. Underneath the hood rumbled a simple 350 Chevy V8 with a Camaro Z28 cam and a four-barrel carb, mated to a Turbo 350 transmission. The final fandango? A ZZ Top logo milled into the valve covers. The car made its debut in 1983, gracing the cover of ZZ Top’s best-selling album, “Eliminator.” But that was just the start. Next, the Eliminator burst across television sets around the world in a series of MTV videos to promote the band’s hits – “Gimme All Your Lovin’,” “Sharp Dressed Man,” and “Legs.” Suddenly, millions of people were exposed to a gorgeously crafted hot rod. In 1985, Monogram produced a model kit of the Eliminator, further cementing its fame.

“The ZZ Top Eliminator coupe might be up there with the film ‘American Graffiti’ as far as spreading the hot rod religion to the masses back in the 1980s,” explained Taylor. “Gibbons was way into hot rods and knew that the ’33-34 Ford three-window coupe was one of the most iconic hot rods. With exposure on MTV and the show circuit that coupe spread the hot rod gospel.”

Following filming the video “Gimme All Your Lovin’,” the band decided a real-world cruise was in order. Sunset Boulevard beckoned. The resulting procession included the California Kid (driven by Chapouris, naturally), the Eliminator coupe, and the yellow ’34 coupe of Jim Jacobs, plus a various cast and friends of the band.

In a recent email exchange with Mr. Gibbons himself, the famed ZZ Top frontman added a bit of perspective, nearly 40 years after the car’s debut: “What made the car so iconic was the color red and the graphics,” he explained. “As far as design, I suspect the reality was more or less ‘undesigning,’ as the designs from Ford during this era, and other American manufacturers, were at their zenith.” 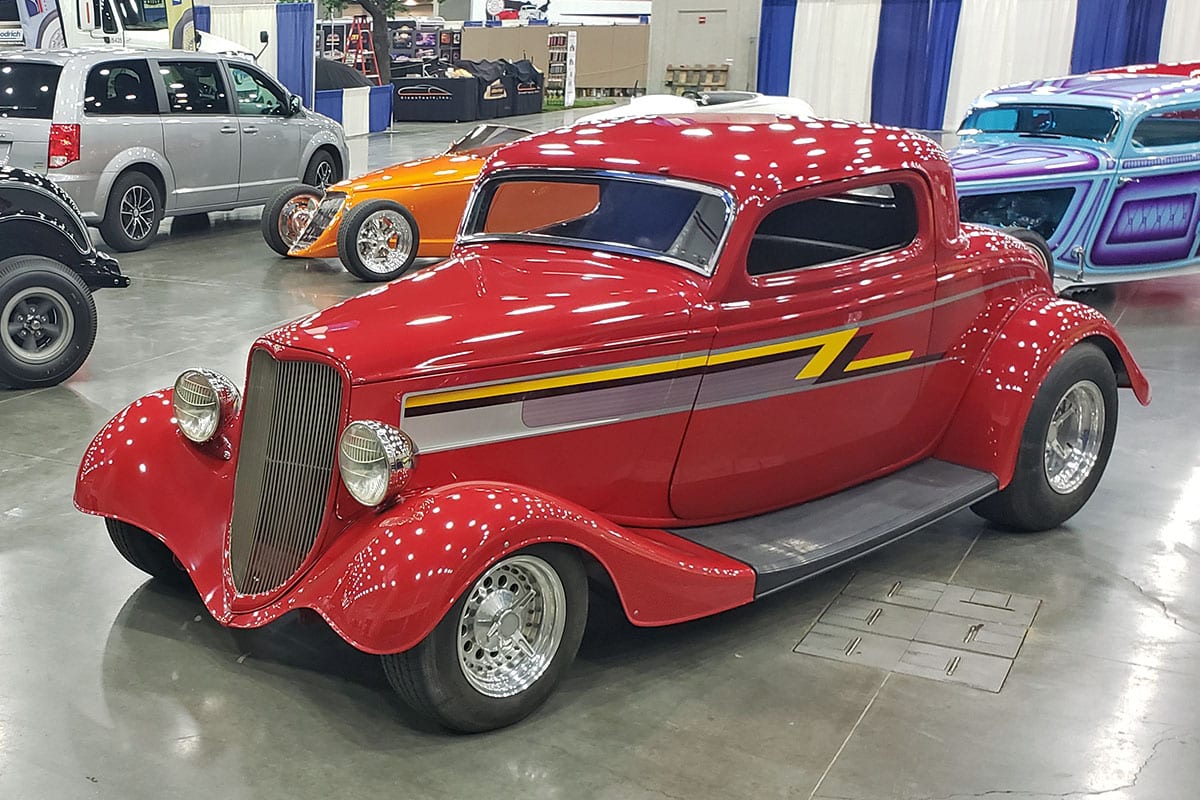 And Gibbons was adamant that the car is a driver. “Yes, the rubber meets the road because the Eliminator Coupe wants to move,” he wrote. The car recently was rolled out from a loan at the Rock and Roll Hall of Fame in Cleveland in preparation for a move to the Chicago Art Institute for an exhibit highlighting American pop culture. Afterwards, Gibbons plans to jump behind the wheel and, in his words, “stride across country back to the West Coast and, of course, the required small-town stops along the way to sample our favorite Mexican cuisine.”

Reflecting on the Eliminator, Gibbons once told a music magazine, “When it comes to automobiles, hot-roddin’ techniques are limited only to one’s imagination. That creative process brings one’s personality to a project. It’s just another way to stand out, it’s part of showmanship.”

And what a show it’s been.