When no less a literary light than Tom Wolfe — thought by many to be the most perceptive chronicler of modern American culture — made it a point to track down and interview Edward Roth in 1963, it was apparent that Big Daddy was more than just another customizer. He was a unique visionary, creator of the Kustom Kulture movement – one that combined the outlaw spirit of the Beat Generation with the high-octane world of hot rods.

Roth’s entry into the world (1932) was ripe with irony: the future counter-culture icon was born in that hub of wealth and privilege, Beverly Hills. His upbringing, though, took place in more humble environs when his parents, Marie and Henry, relocated 18 miles away to the suburb of Bell. Roth graduated from Bell High School, focusing on auto shop and art, and soon developed skill in pinstriping, airbrushing and painting. A stint in the Air Force taught him technical drafting, which helped refine his drawing skills.

He’s the Salvador Dali of the movement — a surrealist in his designs, a showman by temperament, a prankster.

Roth struck out on his own mid-‘50s. He focused on pinstriping and custom painting, taking advantage of the burgeoning SoCal hot rod scene. Roth did more than paint cars, though. He excelled on another medium as well — the everyday T-shirt.

As recalled by Dave Fetherston in Heroes of Hot Rodding, the Drag Wagons Car Club of Maywood, Calif., asked Roth to whip up a shirt design. Ed suggested individual monster-like creations for each club member.

So began the Roth “weirdo shirt,” many hand airbrushed by Ed himself. His most notable creation, of course, was the legendary Rat Fink character, a loathsome yet endearingly gnarly rat. (Some cultural critics believed Rat Fink was Roth’s not-so-subtle jab at that other famous rodent, Mickey Mouse. Roth’s mindset had little in common with that of Walt Disney.) 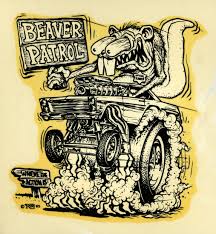 By 1958, Roth was marketing weirdo shirts at car shows, plus advertising them in Car Craft magazine. The crazy shirt phenomenon turned into a national craze, with artists like Pete Millar (of Cartoon magazine) and Dean Jeffries (who airbrushed shirts for George Barris) joining the fun.

Roth opened his own studio in 1959 with a focus on creating unique, over-the-top custom cars. To say he succeeded would be an epic understatement. Roth’s flair for the unusual was unrivaled. More importantly, he could turn vision into reality. He was an early adopter of fiberglass and used a combination of ‘glass and plaster to experiment and mockup various designs.

Roth’s first prominent car was the “Outlaw,” a car that spun T-bucket design in a wild new direction — even wilder than Norm Grabowski’s T-buckets. But it was his breakthrough 1961 “Beatnik Bandit” that really turned heads. The wildly shaped and painted Bandit featured a shortened 1949 Oldsmobile chassis, a blown Olds V-8 and a body shape that could only be described as otherworldly. It even eschewed the usual folding top for a space-age a bubble top (made in a pizza oven, no less.). Yikes! This was no chopped and channeled lakes runner!

Thus began Roth’s run of custom cars that defined him: the twin Ford-engined “Mysterion” (1963), the “Orbitron” (1964), and the “Road Agent” (1965) among others. Roth played a part in California surfing scene, too; his “Surfite”, a yellow futuristic mini-car with integrated surfboard rack, appeared in the Beach Blanket Bingo film series. Early on, Roth’s creations caught the attention of Revell, which marketed plastic model kits of nearly all Roth cars as well as sent Big Daddy to countless car shows promoting his cars, models, and t-shirts.

Ed Roth stories are as legend as his cars, perhaps even more so. Jim Jacobs, who worked for Roth for four years before joining the staff at Rod & Custom in 1970, just laughed when asked to remember Roth.

“Roth was really far out,” recalled Jacobs. “His cars, like the Beatnik Bandit, started out wild and just got wilder. I was hired to help him build the “Druid Princess,” a wild carriage design that featured a baby coffin for a fuel tank. That probably wouldn’t fly today!”

“His outlaw image included his attire,” Jacobs said. “He wore T-shirts everywhere and had an uncanny ability to sleep anywhere, mostly in his car. Finally, Revell suggested he clean up his act if he was to represent the company. So, at the next car show, Roth shows up in a long-tail tuxedo, top hat, and monocle.” The tux story even made it into the pages of Tom Wolfe’s famous essay on the Kustom Kulture movement, “The Kandy-Kolored Tangerine-Flaked Streamline Baby.” (A must-read for any hot rodder.) Wolfe, coming from a New York City art criticism background, offered an erudite portrayal of Roth’s contribution.

“Roth’s designs are utterly baroque,” Wolfe wrote. “The Beatnik Bandit is one of the great objects of customizing. It is a very Rabelaisian* tour de force — a twenty-first-century version of a ’32 Ford hot-rod roadster. And Roth’s new car, the Mysterion, is another tour de force, this time in the hottest new concept in customizing, asymmetrical design.”

Not the vocabulary one would find in the pages of Hot Rod magazine.

Brian Brennan, long-time editor of STREET RODDER magazine, describes Roth in more traditional terms: “Roth was a talented artist and unique car builder by any definition. But there was more to the man. He was more than a ‘wacky’ artist/builder. He was someone who thought long and hard and was both well-read and researched on much of life’s inner workings.”

In his later years, Roth and his wife Irene moved to Utah. He passed away, fittingly in his shop, on April 4, 2001.