No Coast Custom and Rod Shop Nebraska lives by the credo “If you want to do something bad enough, nothing should stop you from doing it.” The philosophy of doing whatever it takes and stopping at nothing courses their veins daily. They’re a tight-knit group of guys fueled by passion and dedicated to their crafts. If you find yourself inside No Coast Custom and Rod Shop Nebraska, you can feel something going on – there’s a certain energy to the place, like something bright is on the horizon. And I mean right now – shop space has vanished with new projects rolling-in every day – for obvious reasons. I say big because there’s plenty of room to grow and plenty of time ahead to do it. No Coast’s fearless leader, Ben Vaneperen, is a young guy. Better yet, he’s a young guy with a vision, superior design skills, and limitless talent. He started No Coast Custom and Rod Shop on his own, with nothing, and I mean nothing. “It all started back when I left the body shop,” Ben states. 12-years back, diploma fresh in hand, he was the lead painter at a local collision repair shop. The work came to an end after the company was forced to close up shop. As they say: “With every end comes a new beginning.” Ben saw it as an opportunity to start something on his own. “I just wasn’t ready to go back to work for someone else again,” he explained. That decision paved the way to the garage you’re seeing today. When it all began, Ben spent what he had on three small apartment garages and started turning wrenches. Then came a stepping-stone, he found a shop with enough room that he could house his homemade rotisserie. From there he started building one of his first full turn-key restorations, a 1955 Chevy. And if that’s where he set the bar, he likes to set it high. “It won’t go any lower from here,” Ben explains. It was no easy feat either. At the time, just shy of 30 years old, Ben knew he had a lot to prove. Delivering the ’55 build to an extremely pleased customer, in a way, put him on the map. Since then, the No Coast name has only become more popular. That venture, along with a list of other projects, landed Ben where he is today, a 6,000 square foot facility, located in Lincoln, Nebraska. And with more space came more help. Alongside Ben are his go-to guys: Matt Gooder, the lead fabricator, Dennis Evans, the token “old guy” manager, and Nate Sieber, the body man and fabricator. Together, they work like a well-oiled machine, and yes, their shop banter is a necessary tool used to motivate. Combined, they bring more than 60 years of professional fabrication skills and experience. 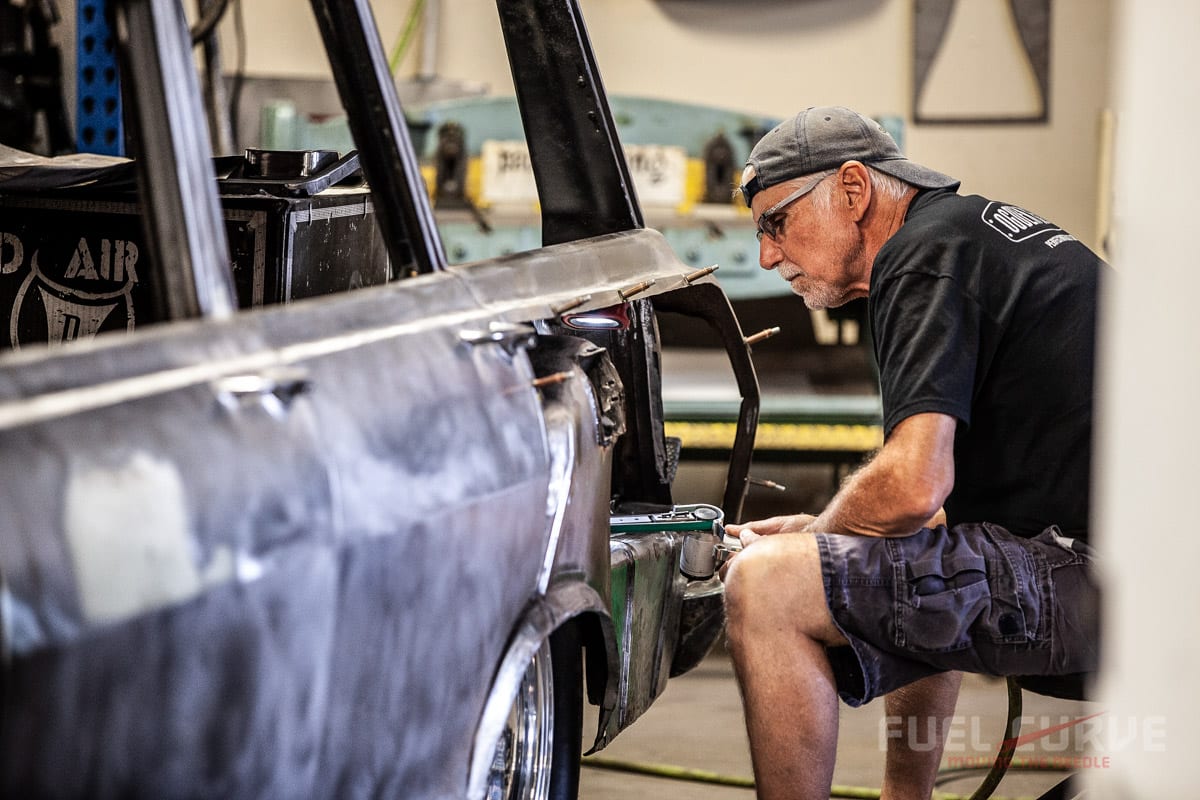 They’ve equipped themselves to the nines too; housing an AccuDraft paint booth, a proper English Wheel, lathes, a Pullmax, with all the tools and equipment necessary to bring their creations to life. They pride themselves on their abilities to integrate industry-leading components in their builds. With the help of suppliers like Art Morrison Enterprises, Atomic Machine, BASF, and Speedway Motors to name a few, No Coast has been delivering first-class custom creations for nearly 11 years now. Breaking the mold has never been easy, but no successful enterprise has ever taken the lead without challenging the status quo. With a plethora of projects taking shape, you can bet on a bright future for No Coast Custom and Rod Shop.