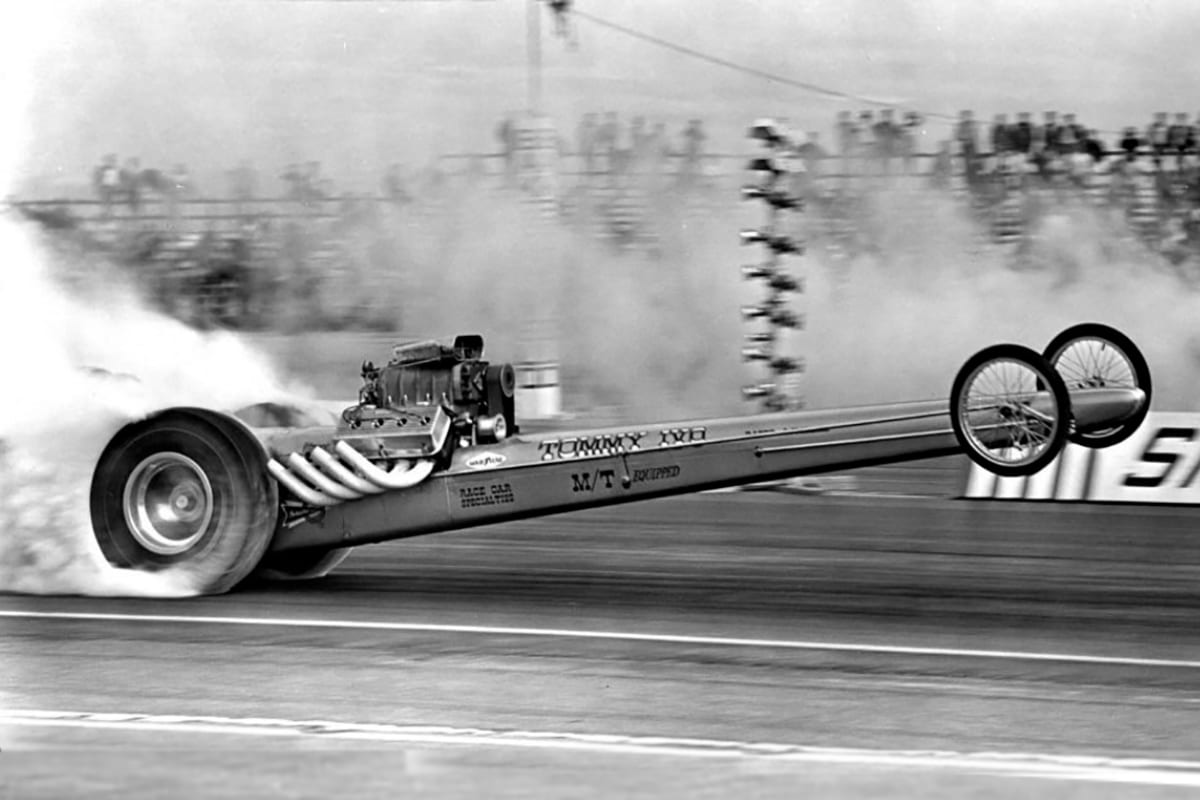 Tommy Ivo once played opposite Boris Karloff (Frankenstein) and Margaret Hamilton (the Wicked Witch of the West). He could sing and tap dance at age three. His big break came at age seven when his two front teeth went missing. He bought a house at age 12.

Yep, the usual background of a drag racing legend. Tommy Ivo – usually preceded by “TV” – is one of motorsports most interesting and fascinating characters, one who transitioned from accomplished child actor to quarter-mile luminary by playing a starring role in Top Fuel racing’s golden era. Sure, actors like Paul Newman and Steve McQueen were top-notch racers and performers. But neither eschewed their acting careers for racing, as Ivo did. And neither Paul nor Steve ended up in the Motorsports Hall of Fame.

It all began in December 1936 in Denver, Colorado, when Hans Frederick and Sarah Ivo welcomed young Thomas into the world. He was an energetic little guy from the get-go, and by his toddler years he could dance like a tiny-tot Fred Astaire and croon like a diminutive Bing Crosby. At the time, Sarah suffered from arthritis and when a doctor recommended a move to warmer climes, the family relocated to Southern California, landing in Burbank. A more fortuitous town could not have been chosen.

Frederick worked as a meat cutter. Sarah held down the home front. Tommy and his older brother went about doing things kids do – attending school, riding bikes, and in Tommy’s case, singing and dancing. He was so accomplished that his mother would take him to auditions where she would cajole the scouts into believing her son’s destiny toward stardom was a lock. Then serendipity struck: Republic Studios was looking for a child actor to play in a musical. Tommy got the nod, in large part because the gap in his teeth was the look the director desired. So began Ivo’s showbiz career, a 19-year run that featured more than 100 movie credits and 200 television appearances. “It was an amazing experience,” Ivo recalled in a recent conversation with Goodguys. “Here I was, a 9-year-old kid, and I’m riding side-kick to Gene Autry!”

At Burroughs High School Ivo focused on the “industrial arts,” that is shop classes. The day he turned 16 he purchased a ’52 Buick sedan, which he promptly look out to Saugus drag strip and let ’er rip. The time ticket reported 66mph. This uninspiring performance turned him off of drag racing…for the moment. Next he picked up a much faster ’55 Buick Century, sporting a Nailhead V8 between the portholes. At Pomona, the Ivo Buick won A/Stock Automatic, setting a class record in the process. “Winning two trophies in one day was like winning two Oscars,” he once told Hot Rod’s Gray Baskerville. “It hooked me on drag racing for life.”

Ivo was also a regular at Bob’s Big Boy drive-in in Toluca Lake, a legendary hangout. One night he spotted Norm Grabowski’s famous T-bucket and decided he had to have one, too. He wedged a Buick Nailhead into a ’25 T pickup. It was wickedly fast, unbeaten in class at local strips. Later at Bob’s he met Don “the Beachcomber” Johnson, who convinced Ivo to drop that Buick Nailhead of his into a Kent Fuller dragster chassis. One pass in that car was all it took. Ivo initially expressed trepidation at actually driving the thing, but once he saw the finished car, he was all in. After his first pass, he was even further in, and he worked a deal with Fuller for a chassis of his own. That machine ran another Nailhead; the bodywork was painted by a then-unknown teenager named Don Prudhomme.

From this point, Ivo’s drag racing career does a full burnout and begins a high-speed run into the history books. To recount all of his quarter-mile exploits and sensational cars would take a book (and there is one: “TV” Tommy Ivo: Drag Racing’s Master Showman by Tom Cotter and Don Prudhomme).

• After success with the single nailhead-powered machine, Ivo had Fuller build him a car that utilized two Nailheads nestled side by side. (This required reversing rotation of one V8 for better sync.) The car set three records – first to 170mph, first to 180mph and first to break into the 8s on gasoline.

• If one engine was good, and two were better, why not four? In 1961, Ivo debuted the Buick Showboat, a quad-engine beast unlike any other. Now, Ivo the showman could smoke all four tires! He planned a national promo tour with the car, but it was scuttled when the studios caught wind of his “other” lifestyle. When his TV series “Margie” was canceled soon thereafter, Ivo was thrilled. Now he could focus solely on racing. • In 1963, NHRA lifted the nitro ban. Ivo sold the Showboat and built a Top Fuel car, the Barnstormer, which set multiple records and was the first car to break into the 7s and the first to top 190mph. In 1964, he barnstormed through England in a series of match races with Don Garlits – thus introducing the Brits to the world of cackle. Over the next few years he campaigned a series of other front-engined Top Fuel cars until…

• 1972, when Ivo brought out his first rear-engine dragster – again another record breaker, the first into the 5s. A fan favorite, AMT memorialized it in model kit form, in two different colors, no less.

• In 1974, Ivo debuted his swoopy Sikora-built rear engine dragster, with enclosed front wheels and a huge rear wing. It was scary fast. Too fast really, as it triggered Ivo’s worst crash – a 200mph upside and backward slide through the lights at the Winternationals.

• By the late 1970s, Ivo switched to Funny Cars as well as Jet cars, including one 280mph run in a car built by salt-flats legend Art Arfons. “What I loved about the jet cars,” he said, “was lighting the afterburner and looking up into the stands. I could see and watch the flames reflect off the teeth of the spectators!” There’s more, way more. But suffice to say that among the early practitioners of drag racing, few were as die-hard and successful as Tommy Ivo. Today, at 83, Ivo is whip smart, articulate, and has unerring recall. His current hobby? Virtual Reality technology.

“Despite all the travel and the miles and miles of towing, I have no regrets,” he explained from his home in Burbank, the same home, by the way, he bought when he was 12. “I never could slow down. I always had a lot of energy, even today. I’ve always kept the ‘kid’ in me. That’s the trick, you know.”

Author’s note: Like Tommy Ivo, I too grew up in Burbank, less than a mile from his place. I distinctly remember walking home from grade school, past Ivo’s house, gawking at the glass-windowed trailer filled with racing machines parked out front.