From the parking lot of Bob’s Big Boy to the boulevard known as the Sunset Strip, Norm’s T-bucket helped push hot rodding to the forefront of American pop culture. Every T-bucket that prowls the road today carries with it a bit of Kookie’s DNA. 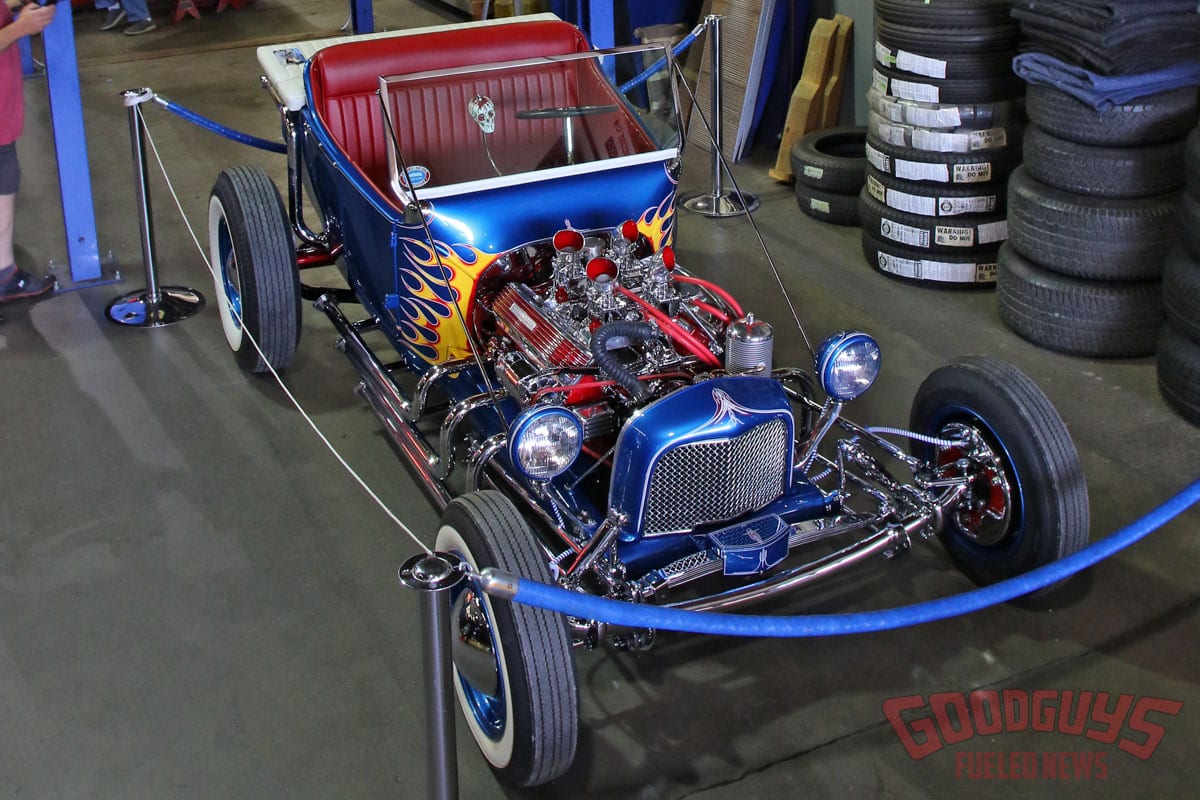 To understand the Kookie T, one must understand Norm Grabowski. He was born in 1933 in Maplewood, New Jersey, to Polish immigrants. At age 12, the family moved to L.A., which proved a turning point in the arc of the precocious young boy’s life.

Formal education never appealed to Norm. He was expelled from high school, then later discarded from the Army, for medical reasons. He worked at a poultry farm with his brother, but that ended prematurely, too. Tall, handsome and extroverted, he knocked on the door at Universal Studios; he landed a gig helping build movie sets. Like many young Angelenos in the 1950s, car culture proved irresistible. Norm joined a car club and in 1952 picked up a fenderless ’31 Ford Model A V8 roadster for $100. It didn’t take long for the makeover to begin. He swapped the A body for the front half of a ’22 T touring, then added a shortened Model A pickup bed. The frame rails were extensively modified, cut here, extended there, kicked up elsewhere. Up front, a suicide spring mount held a ’37 Ford tube axle that sported ’40 Ford “juice” brakes; the reversed-eye spring was affixed by a four-bar setup.

Power was delivered by a 1952 Caddy V8, topped with a 3-71 GMC blower. The drivetrain employed a ’39 Ford top-loader trans and an enclosed driveshaft, with 3.54 gears whirling inside a ’41 Ford rearend. To further accent the car’s look, the transverse “buggy” spring was mounted behind the axle. A veritable who’s who of hot rod legends worked on the body and interior. Neil Emory at Valley Custom fabricated the slant-back and chopped windshield, while legendary trimmer Tony Nancy needled the red rolled and pleated interior. An oversize dice adorned the shift lever. The paint hue? Classic black.

Grabowski dubbed this configuration of his T-bucket the “Lightning Bug,” and it appeared on the cover of Hot Rod magazine in October 1955. More importantly, some movie types had spotted the car at Valley Custom and rented it for “Mr. Kagle and the Babysitter,” an episode of The Ford Television Theatre. That cameo led to more film and television credits for both the car and Grabowski himself, who occasionally grabbed the wheel as a stunt driver. Following its “Mr. Kagle” role, the Lightening Bug was transformed into its famous Kookie T persona. Emory applied a deep blue color accented by flames and pinstripes by famed customizer Dean Jeffries. The blower gave way to a four-carburetor Horne intake manifold and a quartet of Stromberg 97s. The Bug’s costume change was complete: the Kookie T emerged from its dressing room.

Grabowski’s life dramatically changed in April of 1957 when, unbeknownst to him, Life magazine was working on a feature on SoCal hot rod culture. A Life photographer spotted Norm cruising in Hollywood and followed him to Bob’s Big Boy in Burbank, where a photograph was taken of him sitting in the T-bucket, eating a burger. The full-page image appeared in the April 29, 1957 issue of Life. The resulting publicity led to the car’s most famous appearance, a starring role in the hit TV show “77 Sunset Strip,” where it was the cool car driven by star Ed “Kookie” Byrnes – hence, the Kookie moniker. By this time, Norm was also working as an extra in films and had joined the Screen Actors Guild. He eventually appeared in 30 feature films and 25 television shows, including the Towering Inferno, Cannonball Run, Hooper, and My Mother the Car.

In 1959, Grabowski sold the car to a gentleman in Ohio, who painted it a rose color and added twin blowers and dual headlights. For number of years it made the rounds of the show circuit. Norm eventually moved to rural Arkansas and became a talented wood carver. In 2018 the car was sold at auction for $440,000 to Pennsylvania car collector Ross Myers, who sent the car to Roy Brizio Street Rods for restoration back to its Kookie T roots. Another costume change. “It was a great project to work on,” explained Brizio recently. “We wanted to bring the car back for the Pebble Beach concourse. The car was actually in good shape. We went through it completely and maintained as many original components as possible, including the Caddy block – which was so worn, the cylinders had to be sleeved to save it.”

After a quick 11-month build, the restored Kookie T faced the klieg lights once again, this time on the manicured lawns of Carmel. Sadly, Norm wasn’t there, as he passed away in 2012. But his spirit was surely in attendance, as the Kookie T won its class going away.