The first edition of the Texas True Street Shootout was held Saturday, April 22nd at North Star Dragway in Denton, Texas. Organized by Michael Hollis and Barrett Green, this unique street legal only affair drew much attention from the huge following of True Street racers and fans from across the southwest. Six classes were on tap paying out over $13,000 in cash. Each class had a small but firm set of rules. All racers were required to survive a thirty-mile cruise and once on the track, this event was set up as an instant green, no times shown, eighth mile heads up bout. “We put this event together to showcase the True Street racers of the south and what they can bring to the starting line. For street car fans, this is as good as it gets. We’ve got many big name racers here today and are thankful we can put the tagged and inspected type cars and racers in the spotlight. Our sponsors were a great help and we have put up solid money for the winners. We should see some awesome side-by-side racing today,” said Hollis. After completing tech inspection and the mandatory thirty-mile cruise it was time for a quick test session before pairing up the cars for eliminations. Despite not losing a single car on the cruise, carnage took its toll on some racers during the test session. With fields set and the stands full, eliminations got underway as the sun tucked behind the North Texas skyline.

“We put this event together to showcase the True Street racers of the south and what they can bring to the starting line.” Lea Ochs is quickly establishing herself in the True Street scene with her wicked fast 1978 Ford Fairmont Wagon. The “Lead Sled” packs a 440 cubic inch LSX built by Lea’s husband and crew chief Gary at their shop Ochs Performance in Plano, Texas – a project they started back in 2013. Drag racing has been a part of Lea’s life since day one when she cruised the streets of Lawton, Oklahoma in a red 1972 Chevy Nova as a teenager.

Ochs powered her way through the True Street field just a month ago at the Doomsday No Prep Shootout to claim her first event win as a driver. Ochs fared well at the Texas True Street Shootout by advancing to the final round but a holeshot by her opponent Joey White kept her from back to back wins. Despite settling for a runner-up finish, Ochs and company are looking mighty strong heading into a busy 2017 season for the family run team that will be found at many No Prep and True Street events coming up across Texas and the surrounding states. 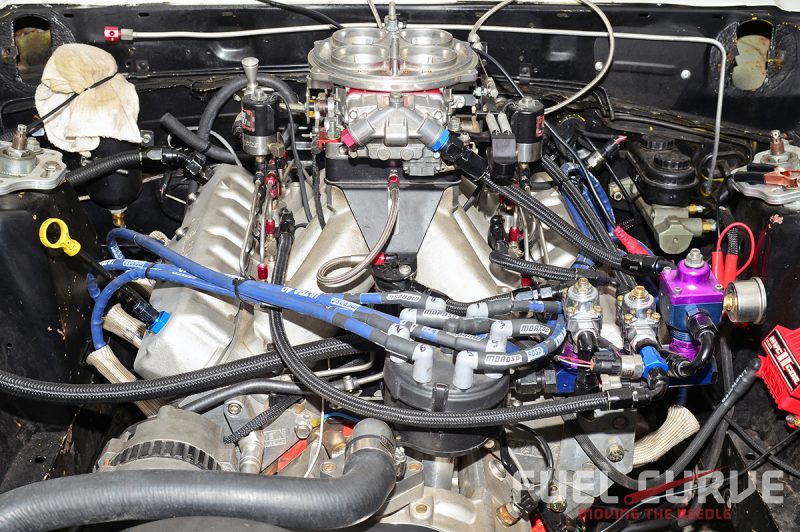 Despite the unusually cold temperatures brought on by a wicked cold front that thundered across the Red River region on Friday night, Saturday’s on-track action was hotter than hot. Fans stood their ground in the stands and along the fence, bundled up in multiple layers and enjoyed some very competitive racing as rounds dwindled down to the finals. It was time to crown winners and hand out literally cold hard cash. Outlaw Street honors went to Casey Rance who defeated Lydia Dugas in a battle of Nissan 240SX entries. True Street hosted a fantastic final round as Joey White used a holeshot to defeat Lea Ochs by just .08-hundreths of a second at the finish line. John Counts slammed the gears to victory over Chad Quick in the Stick Shift category and Fernando Garza brought home the big win over Kenny Barfield in 6.50 Index, the largest class of the event. Nitrous Small Block saw Shane Kienast solo to victory over Joey White, who had to eliminate himself in the final as he was in the money rounds of three different classes and was simply unable to make all the calls to the line. Finally, the Street Truck payday went to Terry Hogg as he defeated Brent Baker. With such a successful outing and great response from the racers and fans alike, it was announced at the event that a second Texas True Street Shootout would be added to the North Star Dragway schedule on Saturday, July 22nd. This mid-summer edition should attract an equally impressive arsenal of hot rods so mark your calendars as we look forward to more True Street action deep in the heart of Texas.