A 1971 Chevrolet El Camino — named Blessed Persistence — was originally purchased by owner Eric Boily in 2006. It was a nice driver but Boily took it upon himself to do some upgrades and modifications in his garage. He cleaned it up enough so he and his girlfriend, Majorie, could cruise it, hitting the local shows and events. The car stayed in that condition for the next six years but come 2012, Boily was ready for a major overhaul. Like so many stories, his initial inclination was to get it repainted and freshened up, nothing crazy. While walking around one of the local car shows in Montreal, he spotted a stellar ’69 Camaro from a shop in Quebec named Showtime Muscle Cars. He then met Showtime’s owner Roger Ouellet. 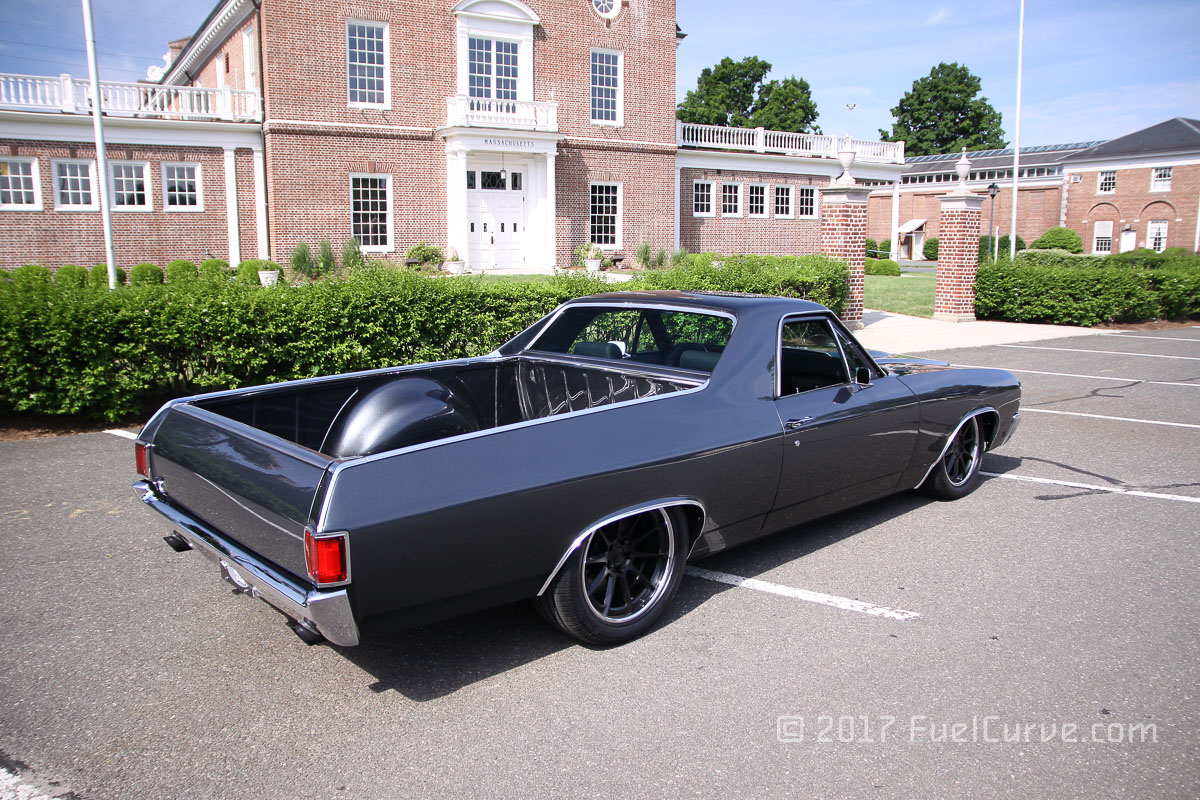 As the two got to tire kickin’, Ouellet walked over to check out Boily’s El Camino. Obviously, he and Ouellet hit it off! About nine hours later, Eric and Majorie arrived at Showtime Muscle Cars’ doorstep to drop off the El Camino. The hook was set deep! What started as a couple of upgrades and a paint job ended up as a three-year complete overhaul into a show-stopping custom!

Ouellet and his team completely reworked the exterior sheet metal then shaved and tucked the bumpers, fully welded and smoothed the underside of the hood, added custom inner fenders, smoothed the firewall and tailgate, removed and smoothed the side body moldings, and shaved the frame for a custom wood bed floor. The original frame was completely smoothed and painted then outfitted with Ridetech front and rear Air Ride suspension, a Flaming River rack and pinion steering setup, a 12-bolt 3.55 rearend and Wilwood 14-inch 6-piston front and rear disc brakes. The Forgeline 18×7-inch and 19×9-inch wheels are wrapped in Pirelli Rosso tires.

Everything is either powder coated or anodized black. There’s barely a single hose or wire visible – it’s an immaculate engine compartment! A 4LBOE TCI Torque 300 transmission and TCI fly­wheel deliver the power to the rear tires. Although the cabin isn’t very big in an 1971 Chevrolet El Camino, there’s a lot going on inside Boily’s ’71. A handmade, custom dash is fitted with one-off Autometer gauges. A Fesler-built steering wheel on an ididit col­umn and an original GM horseshoe shifter allow Eric complete control of his ride.

Blessed is defined as “bringing great happiness or good fortune”. Persistence is defined as “the quality that allows someone to continue doing something or trying to do something even though it is difficult.” After ten years, countless hours, a few bumps in the road and many dollars spent, Eric’s true passion for his 1971 Chevrolet EL Camino is what carried the relationship. Now with a contemporary, show-slopping Pro-Touring machine in the garage, he and Majorie will continue their journey, cruising and hitting the local east­ern Canada car shows. Only now with a lot more style!