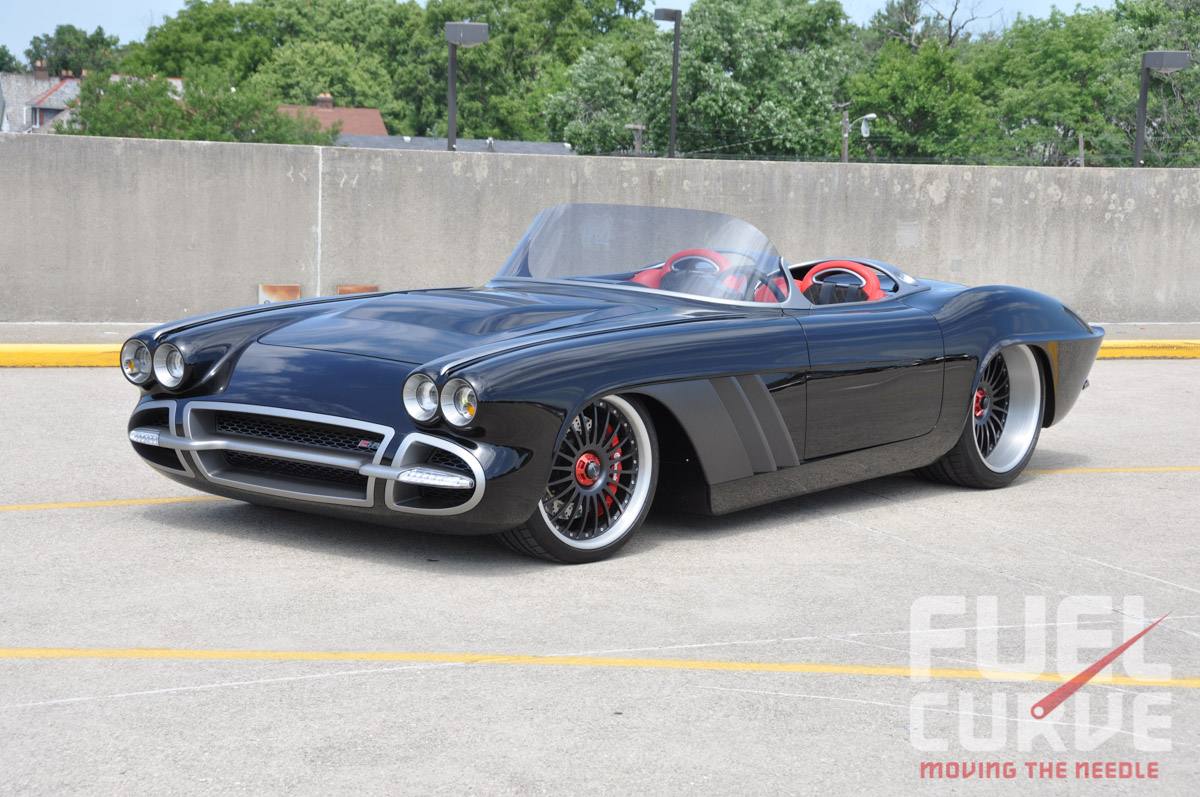 In celebration of the Goodguys PPG Nationals 20th anniversary, we are counting down the last twenty recipients of the Goodguys Street Machine of the Year award to show you the cars, but also to chronicle the evolution of the modern day Street Machine. Perhaps no other breed of high performance car has undergone such radical changes. What we used to do with these cars was all about noise, burnouts, straight line acceleration and posing. Brothers Phil and Jeremy Gerber of Roadster Shop made a bold statement to the entire Automotive universe (let alone the Pro-Touring scene) when they rolled out Barry Blomquist’s C1RS ’64 Corvette roadster at the 2009 PPG Nationals in Columbus. That summer when it laid over the field in Columbus, we wrote “C1RS is a striking blend of hand formed aluminum and carbon fiber built in step with today’s F-1 race cars.” That wasn’t an exaggeration. Designed by Eric Brockmeyer and built in-house at Roadster Shop, C1RS showcased the design acumen of Jeremy Gerber and the coachbuilding skills of the RS team of fabricators. It wasn’t only the best looking car in the field, driver Phil Gerber set Low ET of all fellow competitors with an AutoCross lap of 32.222. The entire front end was custom formed from sixty-thousandths sheet aluminum including the grills, grille surrounds, front bumper and grille bar. The project was a showcase for Roadster Shop’s new-for-the-time line of C1 chassis and when combined with Forgeline center lock race wheels, Brembo brakes and grippy low-pro rubber it made for a lethal package. The 618 horsepower LS7 provided plenty of growl while the racy red leather interior with carbon accents provided an air of sports car lineage. Rumor has it, nobody at RS headquarters involved in the project took a day off for an entire year getting it ready for Columbus. It went on to win a GM Design award at SEMA then years later sold at Barrett-Jackson for $360,000. Score another SMOY victory for first-gen Camaros. This time around, Iowa horsepower maven and Ridler-winning builder Roger Burman teamed with South Dakotan’s Dave and Karen Leisinger on a radical redesign of a ’67 Camaro. The idea was to blend elements from Camaro’s flagship model with a 2010 model and let Burman figure out the how and why. He succeeded! Grafting a 2010 Camaro roof skin was the signature mod but more subtle refinements included a two-inch wheelbase stretch, raised rear quarters and aggressive fender flares. The hugger orange paint made this one loud and proud to say the least. Under the carbon hood was a naturally aspirated 600hp LS-X V8 good for stump-pulling and AutoCross straights. Detroit Speed suspension fore and aft, Boze 18 and 20-inch wheels stabilized the car they named “Scar”. The orange accents were continued in this one’s cabin with vitamin C stitching used on the black leather buckets. Scar was the successor of the couple’s Grumpy Jenkins tribute car (also a ’67) and the predecessor of a ’71 Camaro named “Professor”, also built by Burman, which took home our 2012 Muscle Machine of the Year crown. One thing they all had in common? Brute power and nimble feet.