Perseverance is a virtue when it comes to building a custom vehicle, and Mike and Lynn Connor of Monterey, Tennessee, learned just that when they bought a well-worn ’71 Ranchero. The original goal was to put together a nice driver but as so often happens, the build crept into a full-blown project. The finished hybrid car/truck, dubbed “El Ranchero,” has since gone on to attract much attention around the car show circuit. The origins of this mega-custom hauler started way back in 2013 when Mike and Lynn were at a race in Charlotte, North Carolina and visited a custom car shop. Mike says he commented that you rarely see Rancheros at car shows, noting that he had owned a ’73 model back in the day. Lynn took note and later that year, a fellow church member mentioned he was selling his ’71 Ranchero. The Connors bought the truck and Mike quickly began stripping it down. “The intentions were to make it a cruise-in vehicle with a fresh paint job and some mild upgrades for drivability and comfort,” Mike says. “A good friend, a longtime racer and fabricator, began the suspension upgrades,” Mike continues. “We installed a Mustang II front end, narrowed the rearend, and installed a Strange ring-and-pinion set. We designed and built our own four-link suspension. At the same time, the 351 Cleveland V8 was sent to Bill Fahey at Midstate Motorworks, bored and stroked to 408c.i., cammed with roller lifters, and Australian two-barrel heads added. An Edelbrock intake with Holley EFI was bolted in, along with an MSD distributor and wiring. A Ford AOD transmission was rebuilt by Cookeville Transmission.” There’s always turbulence during a build and El Ranchero wasn’t immune. After the mechanicals were battened down, the truck went into the body shop. When the techs got to bare metal, they found the car was too far gone to be resuscitated. So, the Connors found another ’71 Ranchero and purchased it in 2015. They stripped the first car of all the components and transferred them to the new car and back it went to the shop.


But wait, here comes the second curveball. “Fast forward to August of 2017, the shop told me they were closing the doors and I needed to come and get my vehicle,” Mike explains. “The initial bodywork had been done, an aluminum bed cover had been started, and a custom egg-crate grille had been mocked up. The exterior door handles were filled. The original B-pillars were reshaped to mimic the more aesthetically flowing shape of an El Camino. This roofline change also birthed the name, ‘El Ranchero.’” Other progress had been made in the form of Wilwood disc brakes, 18- and 19-inch Schott Accelerator wheels, and Michelin tires. Inside, the dash from a ’71 Mustang had been procured and narrowed to replace what Mike considered the boring OEM unit. It was a good start, but there was still a lot of work to be done.

“Renderings were created and amended by the talented Keith Kaucher,” Mike says. “The Ranchero had a long way to go and I did not know whom I would get to help me get it to the finish line.” 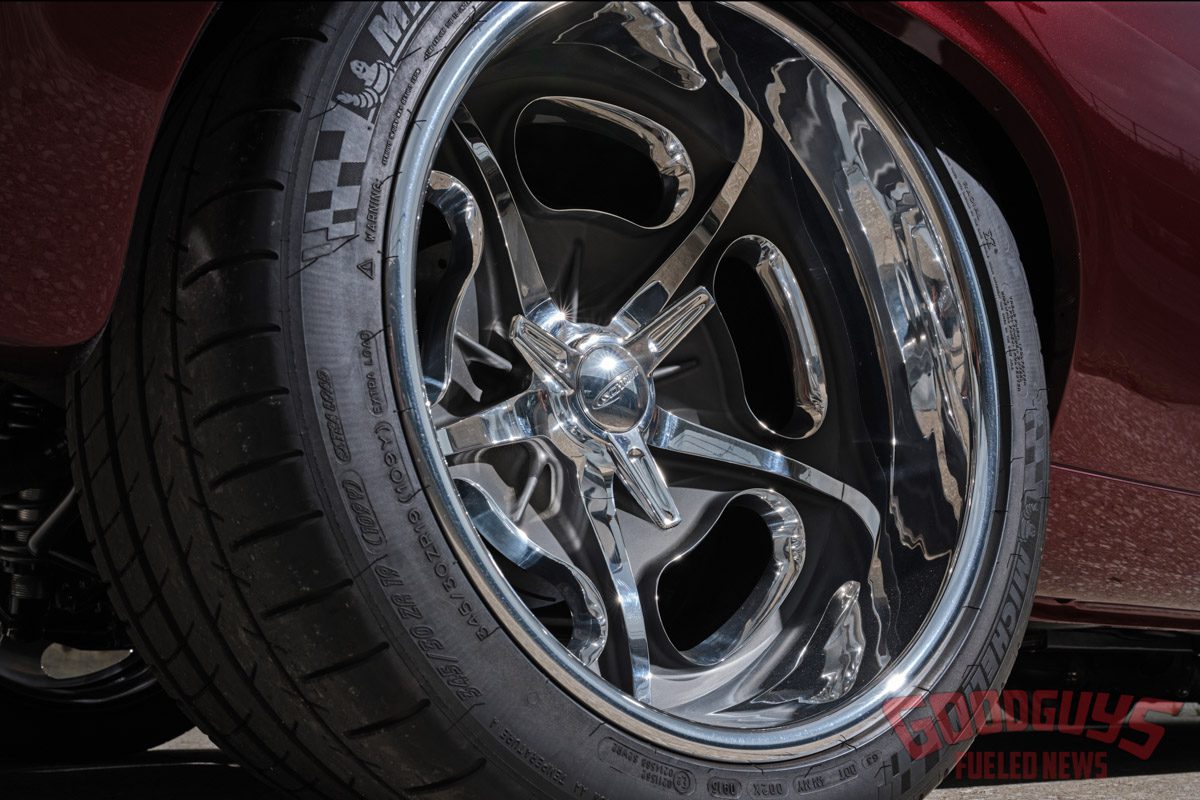 Enter Randy Borcherding of Painthouse out of Cypress, Texas. Randy recounts the timeline. “Mike and I were introduced by my good friend and our upholsterer, Jan Van Kooten of Stitch-by-Stitch Designs,” Randy says. “He knew the Ranchero project had come to a standstill and asked if I’d possibly be willing to take on the project.”

Randy agreed to take a look, picked up the car in Alabama, and brought it to Texas for thorough inspection. From there, Painthouse took the reins and went to work. The extensive list of to-do projects included finishing the installation of the custom full-face grille and LED headlights and crafting LED taillights with custom lenses. The team also massaged and completed the fitment of the Mustang dash (fitted with Dakota Digital instruments), the brake pedal assembly, and the aluminum bed cover and surrounding trim. They also took care of tasks like installing an American Autowire harness and converting the air spring suspension to QA1 coil-overs. The Painthouse team then set their sights on getting the bodywork just right. They tightened and tucked the bumpers and added a custom license plate frame, gapped the body panels, and then began the arduous task of block sanding the body to perfection. When the body was ready, they sprayed it in one of Painthouse’s custom PPG Deltron basecoat colors called “Dark Maroondy Pearl,” and then topped that off with six coats of urethane clear. A custom gray pearl ‘Greyt 8’ wide stripe was applied on the hood, bed cover, and bed rail moldings. Lots of wet sanding and polishing ensued with Griot’s Garage products for the finishing touch. Jan Van Kooten and the team at Stitch-by-Stitch Designs got involved even before the interior work began, taking the lead on building custom bed and roof rail moldings from high-temperature resin. They also crafted brass accent moldings for the bed rails, tailgate, and interior, which were chrome plated by Advanced Plating. This was followed by a complete custom-sewn leather interior, including the dash, center console, door panels, and rear bulkhead. Many charcoal cowhides from Moore and Giles were employed in the process. German square-weave carpet not only covers the floor of the interior, but also the surface of the bed. To date, El Ranchero has been honored to make it into the Top 12 of the 2020 SEMA Battle of the Builders competition, being one of just three trucks chosen. And it has turned heads and earned awards at several Goodguys events this season. It just goes to show how much attention an often-overlooked vehicle can get when given the right custom treatment. And for Mike and Lynn Connor, it’s beautiful proof that perseverance does indeed pay off.