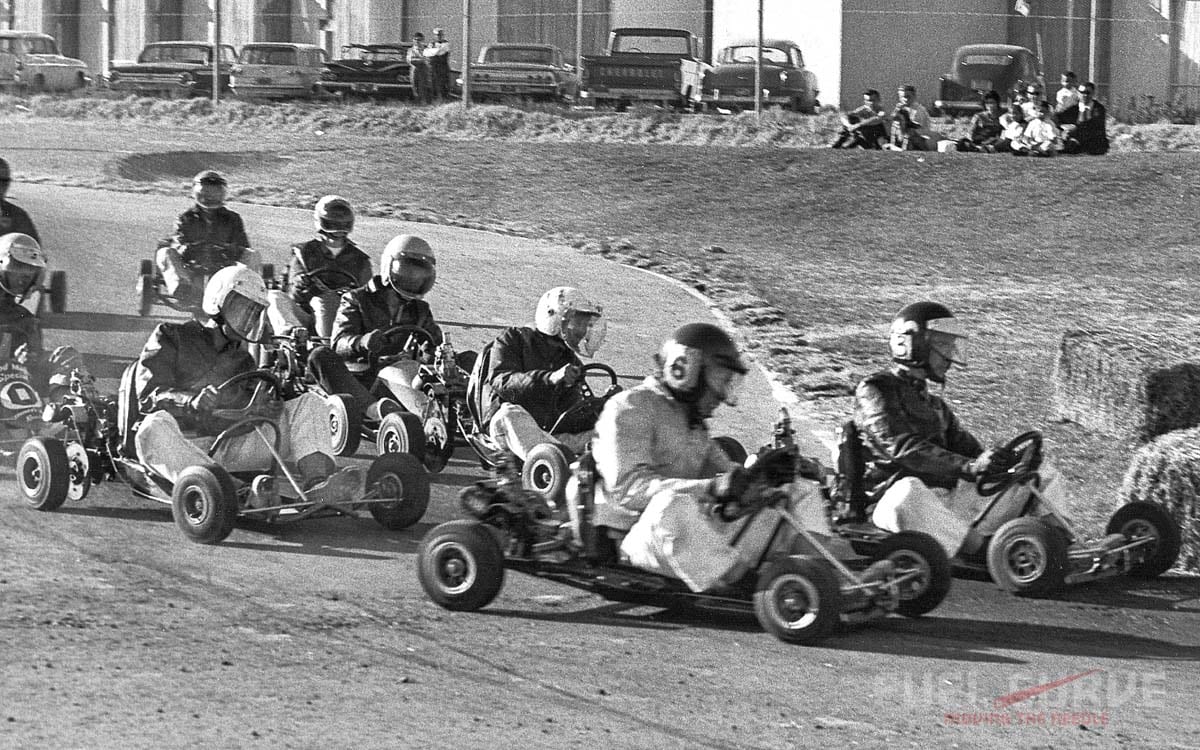 The Early History of Karting

The early history of karting is littered with photographic gold as you will see here. Karting is a young sport; six decades ago it didn’t exist. Karting as we know it began in 1956 in Glendale, California, when Art Ingels, a fabricator at Kurtis Kraft (the era’s dominant builder of Indianapolis 500 race cars) cobbled together a small, tube-frame machine powered by a 2-cycle lawn-mower engine. 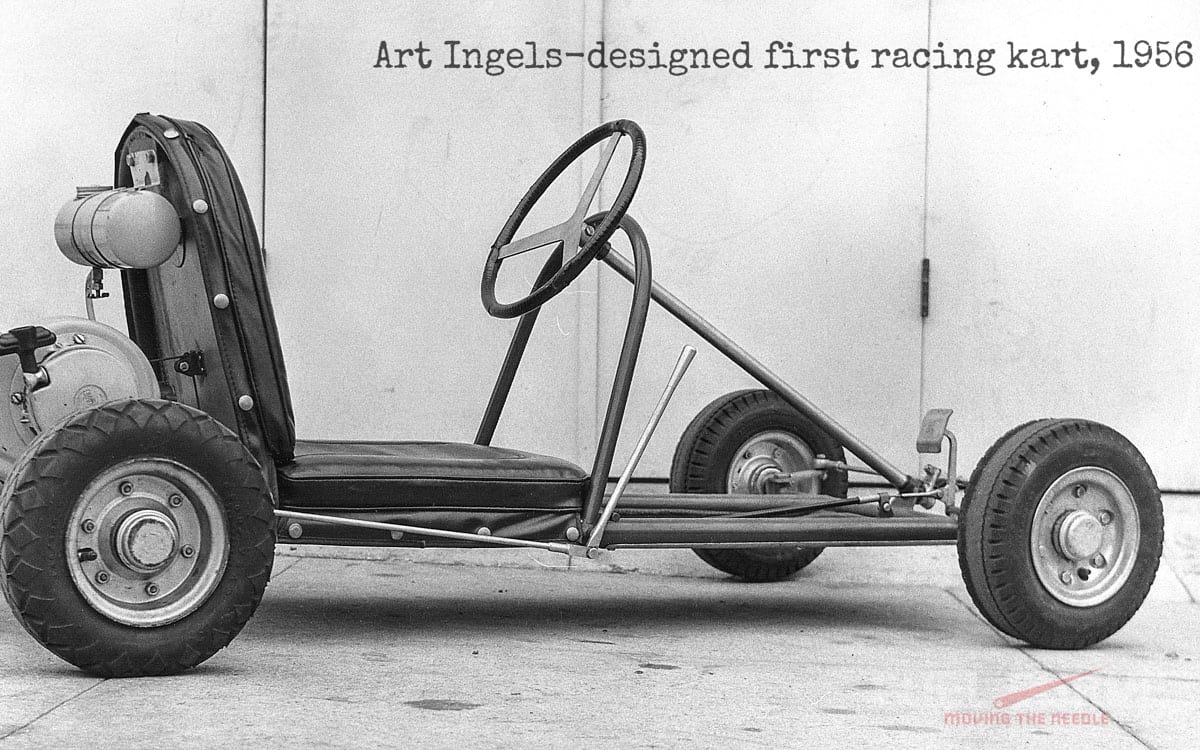 After showing off his contraption in a local parking lot, his friends went home and built their own machines. Soon, Ingels and his buddies were holding impromptu races in the Rose Bowl parking lot. By 1958, the first kart racing track was built in Azusa, California. The sport of kart racing was on its way. The term “Go-Kart” was coined by Duffy Livingston, a muffler-shop owner in Los Angeles, who went on to manufacture and sell karts under the Go-Kart name — the first kart manufacturer. While Ingels may have built the first kart, Livingston is credited with launching its popularity. 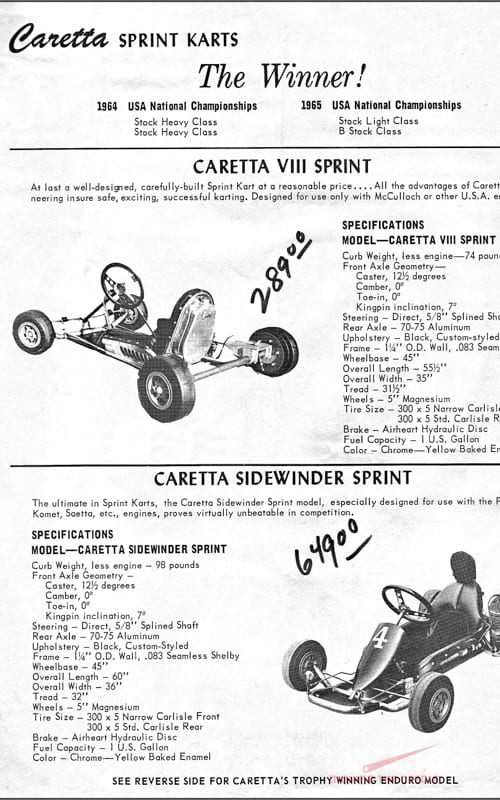 Kart engines, from the late 1950s through today are mostly two-cycle, which deliver serious power in a small package. In 1959, McCulloch — of chainsaw fame — was the first company to produce dedicated kart engines. Clinton, Power Products and West Bend were rival engines.

By the 1960s karting — thanks to US servicemen — had spread to Europe, which saw the introduction of motorcycle engines (sans gearbox) before dedicated manufacturers, mostly from Italy, started to offer engines — Komet, Parilla, and Saetta. As demonstrated by Ingels’ original kart, early karts were breathtakingly simple. The rudimentary Ingels kart, for example, used a hand activated mechanical brake, and the motor was direct drive, meaning no clutch. Tires were made of hard industrial rubber. There was no suspension, just lightning-quick direct steering. Karting became instantly popular, thanks to publicity delivered by Hot Rod magazine and a host of new kart publications. Chassis manufacturers sprung up like mushrooms after a warm rain. Sears and Montgomery Ward even sold karts by mail order. Meanwhile, kart tracks appeared on any undeveloped square of asphalt. Just add hay bales and stir. Popular culture came along for the ride. Karts appeared in movies, like “Bikini Beach,” starring Frankie Avalon and Annette Funicello. Other celebs caught behind the wheel of a kart include Steve McQueen, James Garner, Roy Orbison (pictured above), director Alfred Hitchcock, and The Beatles. Eventually, the “fad” of karting waned leaving the sport to develop into a serious form of motorsport. In the U.S., kart racing was first was managed by the Go Kart Club of America, and later by the International Kart Federation and World Karting Association. Internationally, karting fell under the domain of the CIK/FIA world governing body, which still oversees competition around the world, including the World Karting Championships. In the U.S., the IKF, WKA, and SKUSA (SuperKarts USA) call the shots. While the karts are small, the skill set required to build, tune, and drive one of them is large. Race craft, passing technique, and car control can all be developed in karts, thanks to quick steering, direct feedback, and hours and hours of affordable “seat time.” The list of professional drivers who earned their chops in karts proves the point. Formula One champions Ayrton Senna, Michael Schumacher, Alain Prost, Fernando Alonso, Kimi Räikkönen, Jenson Button, Lewis Hamilton and Sebastian Vettel, to name but a few, all started in karts. But it all began 61 years ago on a side street in Glendale, where an Indy car artisan whipped up a small 4-wheel diversion. The world of motorsports hasn’t been the same since.