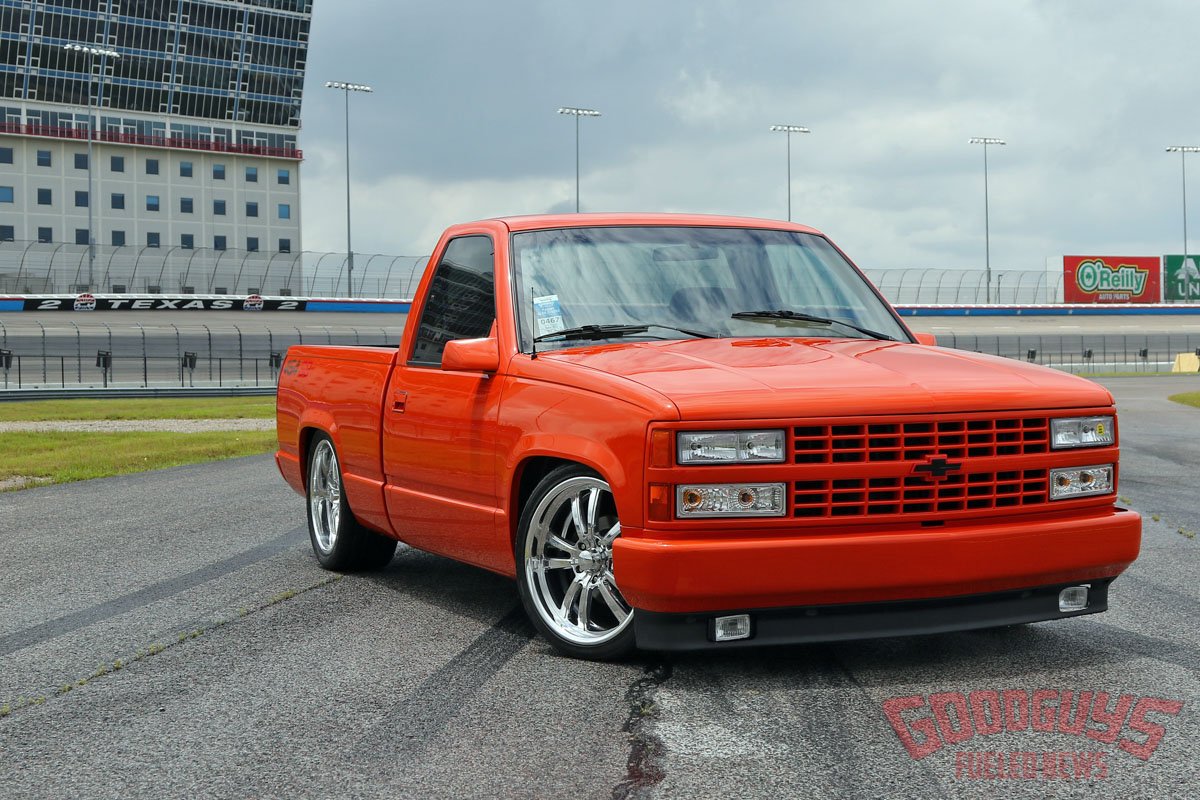 O.J. – The One-of-One 454 SS Chevy Concept Pickup That Should Have Been

In the rapidly evolving world of classic trucks, vehicle owners and builders are doing what they can to add a new twist to retro rides. Case in point is this concept 454 SS pickup from the “crüe” at Hill’s Hot Rods. Jason Hill was at the forefront of the custom squarebody wave, so it is no surprise to see him and his team rolling out jaw-dropping OBS Chevy pickups like “OJ” (as they call it) seen here. Before getting too deep, let’s go back to 1990 for a refresher on how these 454 SS trucks came to be, and what set them apart from the rest of the C/K 1500 pickups. Between 1990-93 Chevrolet offered a C1500 edition pickup (the 454 SS trucks were never identified as their own model) with a 454 cubic-inch big block engine producing 255hp and 405 lb-ft of torque. Supporting the extra power were gas-filled Bilstein shocks, a front sway bar, quicker ratio steering box, and aesthetic upgrades on the exterior as well as inside the cab. The downside? In 1990 and 1991 they were only offered in Onyx Black paint. For 1992 and 1993, Summit White and Victory Red paint colors were added to the mix.

But why not Hugger Orange? That question floated around Hill’s Hot Rods and was quickly addressed. The Hugger Orange color was released in 1969 with the iconic ’69 Camaro to help push sales and set it apart from the Ford Mustang. To go one step further, Hugger Orange got its name from Chevy’s ad campaign when they called the first-generation Camaro “The Hugger” for its wide, low stance and performance handling as it “hugged” the road.

So, once again, when Chevrolet released a performance pickup with increased handling capabilities, why not offer it in Hugger Orange? Therein lies the premise for OJ – the one-of-one 454 SS pickup that Hill’s Hot Rod debuted earlier this year.


This truck is more than just a paint job. They started with an original 1990 Onyx Black 454 SS pickup and brought it up to modern-day standards by equipping the stock frame with a McGaughys 2/4 lowering kit using drop spindles and springs up front, and a flip kit out back. They then added the 20×8.5- and 20×10-inch Raceline wheels wrapped with Nitto tires. Before Jason Hill laid down the orange paint, the Hill’s Hot Rods crew shaved, smoothed and tucked the bumpers as well as shaved the cargo light and added sport side-view mirrors. The tan bucket seats and interior came from a survivor donor truck and the A/C vents were painted tan to match the dash. New parts came in the form of Dakota Digital gauges, a Forever Sharp steering wheel, a RetroSound bluetooth radio playing through Kicker speakers and subs, and Clayton Machine Works pedals. It wouldn’t be a 454 SS without a big block 454ci Chevy engine. But like everything else, the engine also couldn’t be left original. It was pulled and rebuilt using an Edelbrock intake, Billet Specialties valve covers, an HEI ignition, Hooker headers, Flowmaster exhaust, electric water pump and cooling fans, and a CVF Racing serpentine drive. The engine bay was also treated to custom sheet metal panels that were finished in flat orange paint, as was the firewall. We’ve seen our fair share of “what if” builds, but not very many of them make you truly question why the idea didn’t come to fruition from the factory. The Hill’s Hot Rods team did something that Chevrolet should have done 30-plus years ago.