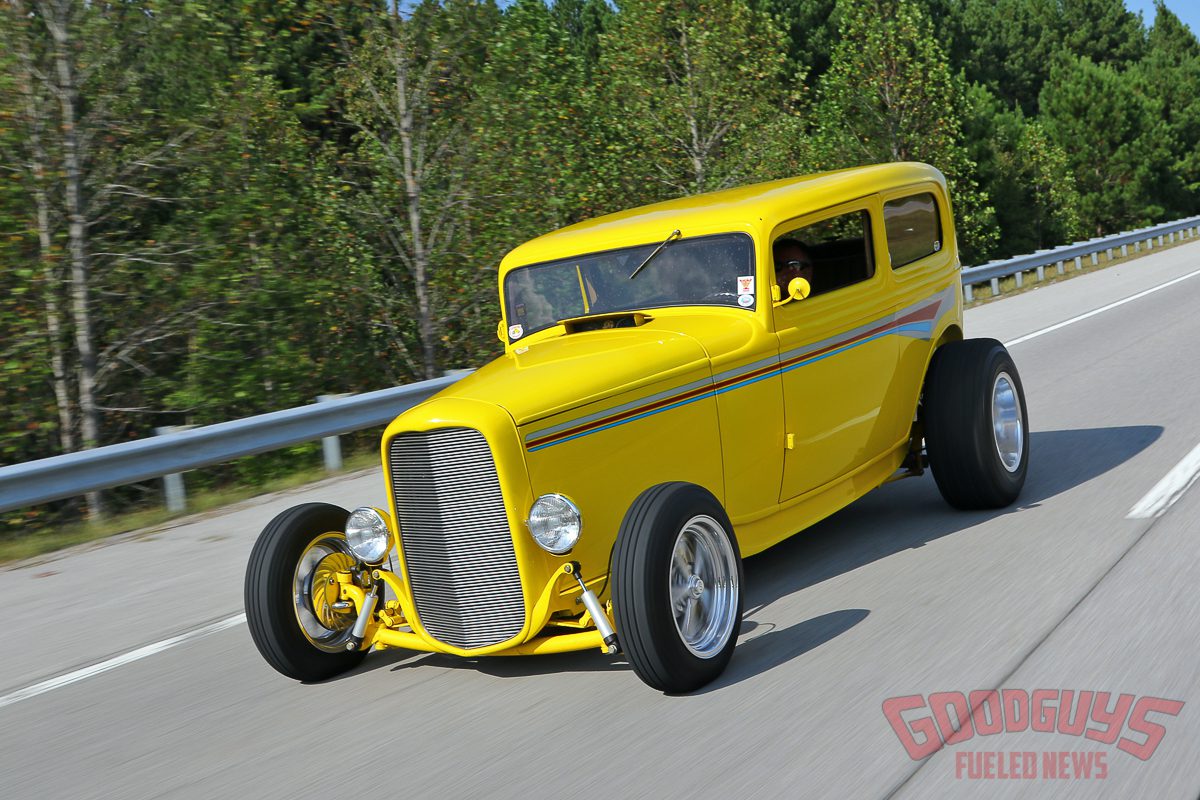 Nike has its swoosh. The NBA its Jerry West silhouette. Target its red bullseye. Apple its, well, Apple. And the Goodguys logo? None other than the screaming yellow 1932 Ford Tudor sedan of Goodguys’ founder, the late Gary Meadors. Meadors came of age during the 1950s, living in the small central California town of Dinuba. There he lived an adolescence seemly pulled from the American Graffiti screenplay. He built his first hot rod in 1955, a ’47 Plymouth coupe powered by a Chrysler six. He immediately slammed it to the ground, the remains of shortened coil springs glowing red on the garage floor.

Cars were his life from that moment on. He balanced an early career in sales – deodorant, anyone? – with cruising in a succession of different rides and immersing himself in the local hot-rod fraternity. This led to a local position with NSRA, and by the late-1970s, Meadors was organizing rod-and-custom get-togethers, most notably the 1978 NSRA West Coast Nationals.

It was during this stretch that he added a ’32 Ford Tudor to his stable. He purchased the Deuce in 1973 in Paradise, California. It oozed 1970s hot-rod aesthetic – full fenders, metallic brown paint, and wire wheels. Naturally, it broke down on the way home. Gary quickly moved to boost its reliability with a series of upgrades – Firebird front-spindles and disc brakes, a ’57 Ford rearend with coils and ladder bars, and rewiring. He retained the rock-steady 350c.i. Chevy. His effort was validated when he cruised to the 1973 NSRA Nats in Tulsa, Oklahoma, where he was awarded the “Rod Run” award. One mechanical hiccup did occur, however. While careening around the Streetkhana course, the traction bars fell off.

Two years later, in 1975, Meadors embarked on a complete rebuild. Again, toiling in his garage, he filled the top, revamped the chassis, and sandblasted and massaged the body. He added fresh upholstery and renounced that caramel color in favor of a dazzling Pearl Yellow lacquer (applied by Gary himself). The fenders still went along for the ride, which included a drive to the 1977 Grand National Roadster Show in Oakland. 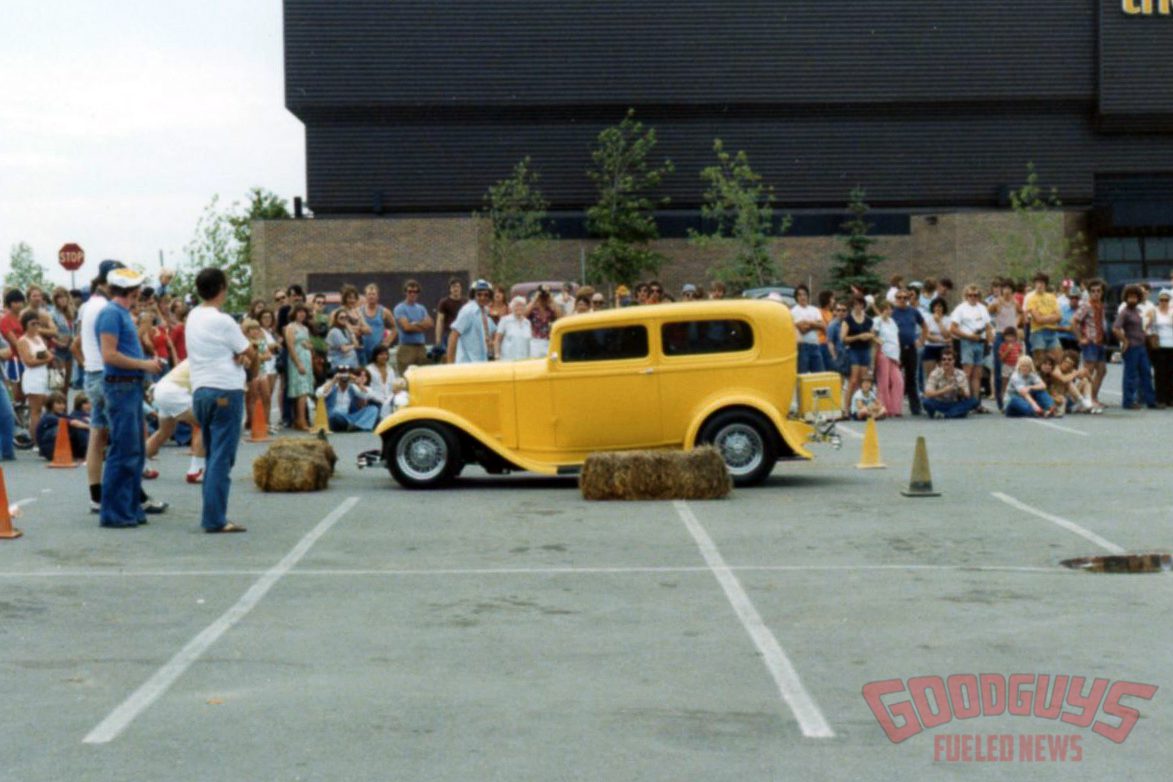 In 1983, Meadors set off on his own and formed Goodguys. The first Goodguys event was the 1983 All-American Get-Together in Pleasanton, California. More than 600 cars showed up, proving Meadors’ business vision was 20/20. Meadors decided his new organization needed a new signature hot rod, and in 1985 his ’32 sedan went through yet another metamorphosis, this time handled by a lineup of skilled craftsman. Deuce mavin Dick Magoo massaged the chassis, starting with fresh Just-A-Hobby frame rails. At the front, Magoo utilized components from Super Bell, Posies, and Pete & Jake’s. Out back a narrowed 9-inch Ford rearend was secured by a triangulated four-bar setup. Under the hood purred a fresh 350c.i. small block, fed through a four-barrel-topped B&M street blower. 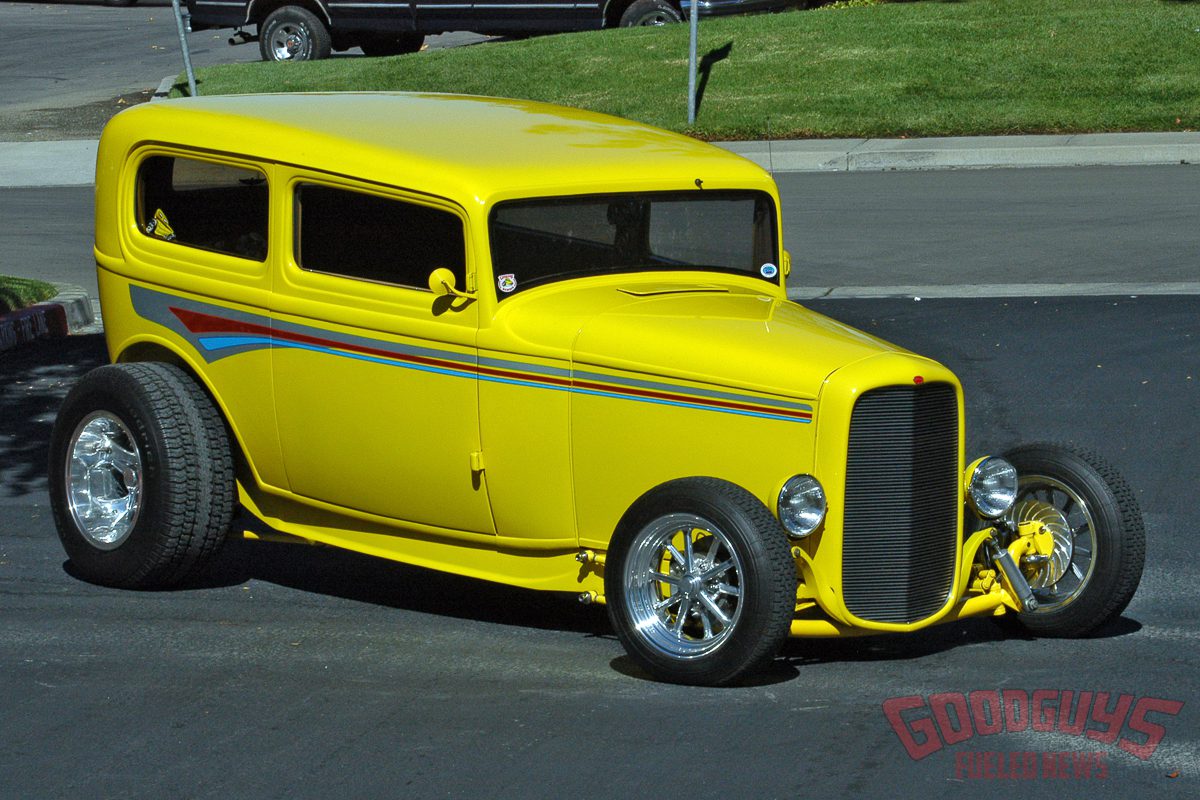 The restyled Deuce debuted at the 1986 Goodguys West Coast Nationals in Pleasanton. It proved so popular that Meadors decided to make it the centerpiece of a new Goodguys logo. Soon, Goodguys hats, tees, sweatshirt were emblazoned with the Deuce. It remains as one of Goodguys’ primary logos today.

But the car’s real calling card has been its record of long-distance cruising. When asked how many miles and cross-country trips the car has completed, Goodguys president Marc Meadors (the same Marc referred to earlier) estimated at least 200,000 miles and more trips than he can remember. Just last summer, Goodguys sales executive Sadie Vail took the wheel and cruised from California to Washington, then back to California before driving to Texas through Colorado. The sedan also made a cross-country trip from North Carolina to California back in 2017. This on-the-road resume represents everything Gary Meadors and Goodguys preached – “ya gotta drive ’em!” In an interview with the San Francisco Chronicle, Gary once explained his philosophy:

“There is nothing like taking a hot rod out on the open road and driving your worries away – in fact, I’ve never felt freer than when driving my car down the highway,” he explained. “The memories and the people you encounter along the way, not to mention the sights, are priceless.”

Another Meadors catchphrase was “See you on the road!” In other words, keep a lookout for a one special sparkling yellow 1932 Ford Tudor highway sedan. You know, the one on the logo.