Persistence, performance, and consistency paid off for Josh Leisinger in 2021 as he raced his way to the CPP AutoCrosser of the Year title in the potent Summit Racing-sponsored Crusher II ’64 Corvette, a track-proven warrior with a long list of victories. Both the driver and the car had the speed, precision, and talent to lay claim to the highest honor in the Goodguys CPP AutoCross Series. Josh has been a steadfast competitor in the Goodguys CPP AutoCross series for many years. In 2021, he had a near-perfect season, competing in six Goodguys National events and claiming the PRO-X class win and shootout victory at each of them. He had already claimed the PRO-X season points championship when he arrived at the 24th Speedway Motors Southwest Nationals in Scottsdale, where his toughest competition came from a familiar source: his brother Jared. By midday Saturday in Scottsdale, Jared had earned the top qualifying spot for the Duel in the Desert with a 28.613-second best lap. Josh was within striking distance with his 29.007 and continued to get faster as he knocked off competitors in the Duel, running as quick as 28.158 against Tom Kamman in the semifinal round. When the two Corvettes faced off in the final, Jared made a 28.447-second run. Josh ran an extraordinarily close 28.454 (just .007-seconds slower than Jared), but a 2-second cone penalty left him with an official time of 30.454. Despite missing the Duel in the Desert shootout victory, Josh was the highest overall finisher of eligible AutoCrosser of the Year racers and earned the AutoCrosser of the Year honor. Josh’s victorious ’Vette is no stranger to these pages, but we rarely get a chance for a closer look at the race-proven machine. The 2021 season was the seventh year Josh has raced the car, which was originally built by Cale Kern Hot Rods. The foundation is still the Kern-built chromoly tube frame, which uses C6 Corvette suspension components, Afco Performance coil-over shocks, and a Winters quick-change rearend that allows for easy gear changes at the track. Wilwood disc brakes do the quick stopping behind Forgeline 18×12- and 18×12.5-inch wheels wrapped in Yokohama 315/30/18 tires. The Leisinger team turned to some legendary names for the potent LS engine: Warren and Kurt Johnson at Warren Johnson Racing. They won’t divulge many details on the proprietary internal parts that help it generate more than 800 horsepower, though it’s topped with a Warren Johnson/Wilson Manifolds intake and uses Holley EFI and ignition components. Power is transferred through a custom Gearstar-built Powerglide transmission backed by a GearVendors overdrive. The lightweight fiberglass body was originally modified by Cale Kern years ago and has evolved through many seasons of competition. Flared and radiused wheel openings accommodate the wide wheels and tires, while a carbon fiber chin spoiler and adjustable rear spoiler assembly aid in tuning the airflow and adjusting downforce as needed. Lexan windows and a lift-off hood help to keep weight down. Impact Auto shot the PPG satin red finish, which is adorned with the Summit Racing logo and other sponsor lettering. The inside of this fiberglass flyer is race basic, with hand-formed aluminum panels, Kirkey race seats, G-Force harnesses, and a quick-release racing wheel. Dakota Digital instruments keep Josh informed, a B&M shifter lets him control the transmission, and he’s protected by a full roll cage tied into the chassis. 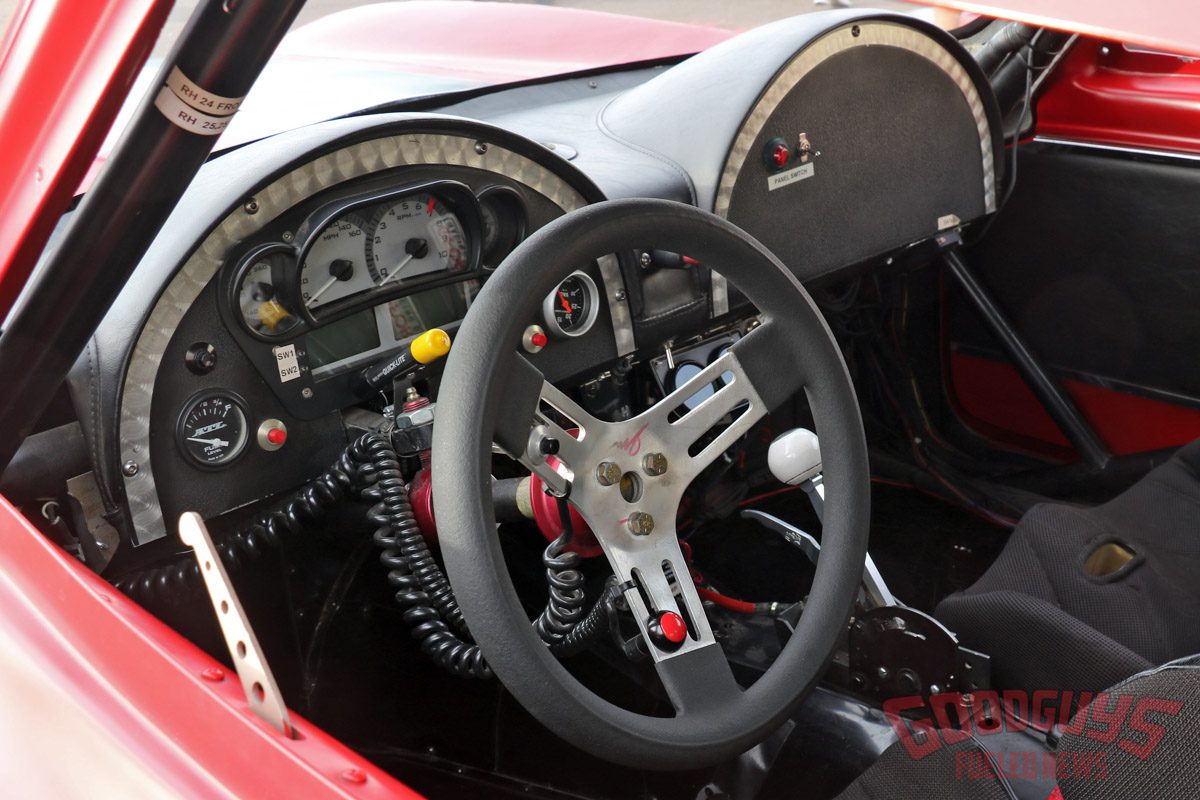 There’s no doubt this Corvette is a brute of a machine, and Josh has proven he has the driving skills to harness its power and race it to win after win. He’s quick to give credit to his team for contributing to his success, reinforcing their motto: “Family built, family driven, family fast.” Congratulations to Josh and the Leisinger team on their successful season and the 2021 CPP AutoCrosser of the Year win!