Make no mistake – this is a native Cincinnati Chevelle. It’s an old school Chevy with air ride, a big block 454, 400 trans, and 3.73 gears. Sounds like a good time right? While on a recent trip to Ohio we couldn’t resist shooting Everette and Trevonna Howard’s ‘68 Chevelle.

Everette’s owned the car since he was fourteen years old, before he even had a license. And before that, his dad bought the Cincinnati Chevelle brand new off the showroom floor in 1968. Like lots of cool cars in our lives, this is one that chose the owner, not the other way around.

Moving along Everette’s timeline with the Chevy, he picked up Trevonna for their first date in this very car back in the day. The secret is the car wasn’t as clean as it is now, and somehow or other Trevonna got cut on a sharp edge somewhere.

Needless to say, she was less than impressed, although both Everette and the Chevelle must have grown on her because they went on many more dates in the car before getting married. After this, they’ve restored the Chevelle together over the years and now Everette sees it as more of his wife’s car than his own.

We cruised down the road with Everette and Trevona to Southern Ohio V-Twin for a location shoot and to get a closer look at the Cincinnati Chevelle. Mama’s Chevelle has been repainted twice over the years, but now it again wears the original factory color it shipped with. Well, almost – the color has been slightly reworked with the magic touch of Boitnott Custom Body & Paint right here in Cincinnati.

The paint certainly has a deeper sheen and seems to jump out at you in the sun; it’s hard to beat a factory color like Grotto Blue from the sixties but it just goes to show that if you don’t take it too far a bit of tweaking can be the best of all worlds.

This sort of philosophy has been applied to the entire car with Everette and Trevonna making subtle improvements everywhere. The interior is in pristine condition for a car that gets driven to shows, events, and cruise-ins all the time. When we mentioned how clean even the floormats were, Everette apologized for not having time to completely detail the car beforehand! This attention to detail and Everette’s high standards make a big difference in turning out a project like this.

He’s added a big tach and a stereo for those long drives, but beyond that the interior is a bit of a time machine with simple sixties touches throughout. It’s always great meeting people with an appreciation for how things were and Everette’s worked to keep lots of details the same as when his dad picked up the car brand new.

These high standards are carried over into the engine bay as well. The reflective chrome on the Gen five 454 big block looks so good reflecting the glossy Grotto Blue in the engine bay. Originally the car came with a 396, so Everette’s kept the badging consistent throughout.

All of the chrome work, top and bottom, was completed by Everette himself. The VT Kustoms air ride setup allows Everette to get that clean and low look while not compromising on drivability. No more scraping headers on railroad tracks!

Looking at the car as a whole, the vinyl top plays nicely with the five spoke wheels Everette chose for the build. At 18×7” in the front and 20×10” in the rear, they’re definitely bigger than what the car came with but the big dished wheels look great when the car’s cruising down the road or aired out at a show.

Nothing is too crazy, and Everette has done plenty to ensure the car doesn’t get boring some five decades after his dad bought the Cincinnati Chevelle brand new. It’s part of the family now, and he and Trevonna will be cruising it together for the decades to come. You can count on that. 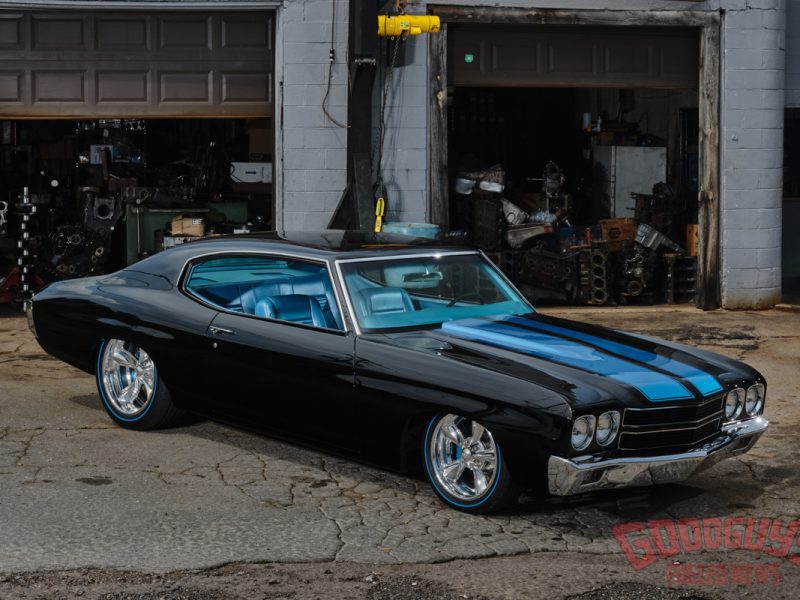