Custom Harley Deluxe motorcycles are somewhat of a rare breed. Ya know – being landlocked plays a role. But this 2011 Harley-Davidson Deluxe checks all the right boxes. For starters, it has a more impressive power to weight ratio than a brand new 911 Turbo. That’s a lot of power for something with no crash protection and, seeing as how the bike is ridden regularly in Maui, you don’t even have to wear a helmet. The custom Harley Delux belongs to a Dave of Bad Island Crew, a Motorcycle Club based in Maui. The club organizes several charity events each year, not only on Maui but Oahu and the Big Island as well. All the guys ship their bikes out and do group rides, often with other clubs, to help raise money for kids and schools on the islands.

There’s a reason scooter and motorcycle rentals are so popular for tourists out here; air conditioning is great, but the tropical breeze feels even better when you’re flying down the highway on one of these, especially when you don’t even have to wear a helmet. If you’re on the islands, this is the best way to get around. Our general feeling is that most modified bikes have a tendency to really go over the top — maybe it’s because there just isn’t as much to be done as there is on a car. That most likely plays a role. However, instead of taking the extreme show bike route Dave built a Harley that’s modest and tasteful, while still having bigger front wheel than you do (Unless you’re an NBA player).

Spoked DNA Fat Daddy wheels were chosen, measuring a massive 21-inches in the front and 16 inches out back. Wrapped in tasteful whitewalls, they help give the bike a clean, vintage look while subtly adding to the overall aesthetic. As with any vehicle, a proper suspension setup determines whether or not you’ll have a fun time driving, or in this case, riding. Dave’s bike is lowered on the deck via a Custom Cycle SAS air ride system allowing for sinister looks while parked. What a difference just a couple inches makes! Speed bumps and cruising are a lot more manageable when you don’t have to worry about the pipes scraping and the bags allow for easy ride height adjustments.

Handle bars make a big difference in the custom bike game. Dave got it right again, going with LA Choppers Outlaw Z bars with Performance Machine contour controls. These upgrades clean up the mess the factory made while giving the front end an aggressive touch. 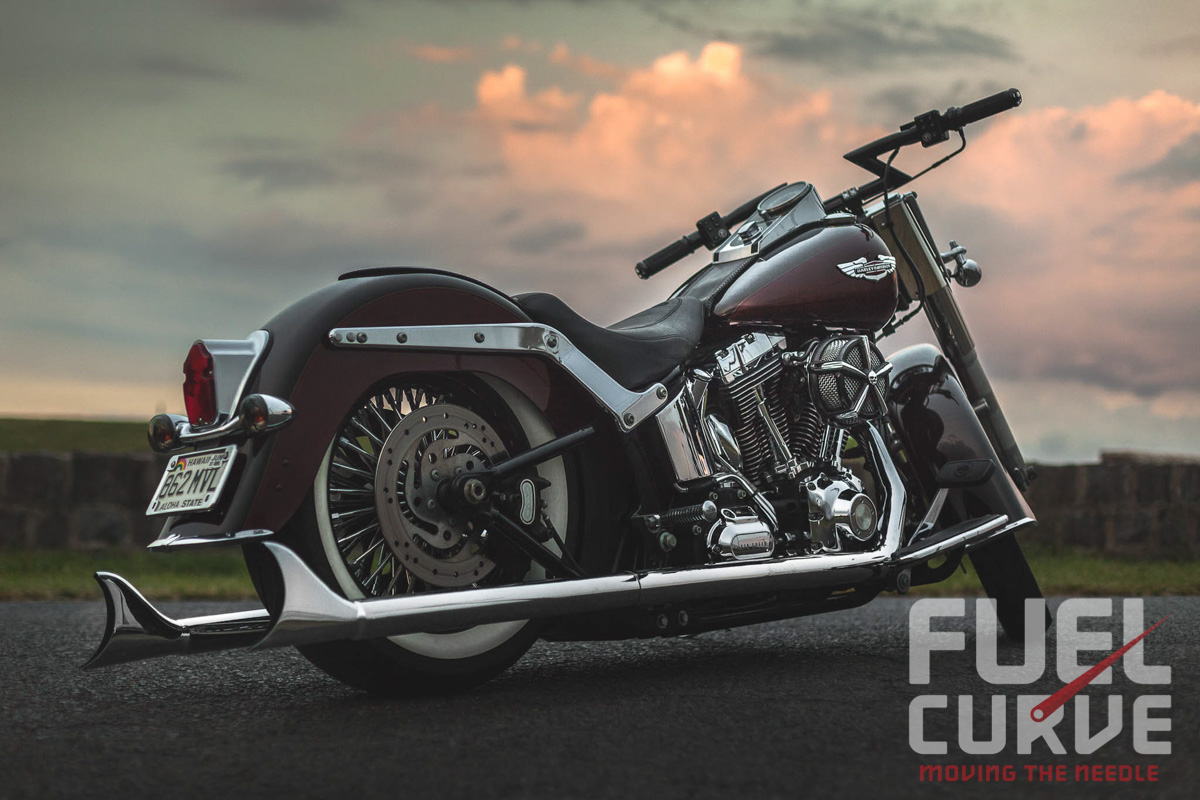 And then, of course, there’s the motor. Displacing 96 cubic inches from the factory, the V-twin has been stroked out to 107ci (1.75 liters!) and built to 10:1 compression. A Stage 2 air cleaner helps the big motor breathe, and a Screaming Eagle ignition setup provides the spark. Power goes through the standard 6-speed cruise drive, and exhaust pumps out a pair of Sampson Fishtail pipes.

As with most Harleys, pipes can make or break your build. The pipes accentuate the simplicity of this Island Style Harley Deluxe; long, low lines that extend out past the rear wheel. And those fishtails just look so right dumped in the Maui grass.

And like with most projects, it’s never over. While we think this Maui cruiser already looks right at home, whether it’s dumped at a show or flying down the island highways, Dave assures us he isn’t quite done tinkering around. He’d like to upgrade to some blacked out forks to name one thing still to come. It’s also worth mentioning that Dave keeps this thing really, really clean. At first it might seem a lot easier than keeping a car in good shape but when you consider that the whole thing is nearly chromed-out, the exposed engine bay full of nooks and crannies, you realize it might take more time than you would think. As the sun was heading down over the Pacific we took the Deluxe back to the garage, where Dave had one more trick up his sleeve.

The Deluxe isn’t the only bike Dave’s modified. In fact, he built this black & blue custom chopper himself from the ground up, stuffing an 80 cubic inch motor in a frame that weighs under 400 pounds. When we got home we rolled it out for a quick shot; next time we’re on the island, though, we will definitely making time to shoot this thing properly.

Dave gets it. His Custom Harley DeLuxe is on point with clean lines and clean chrome, contrasted by glossy black details. His bike seems to strike the perfect balance between form and function, a minimalist approach to an outrageous machine.