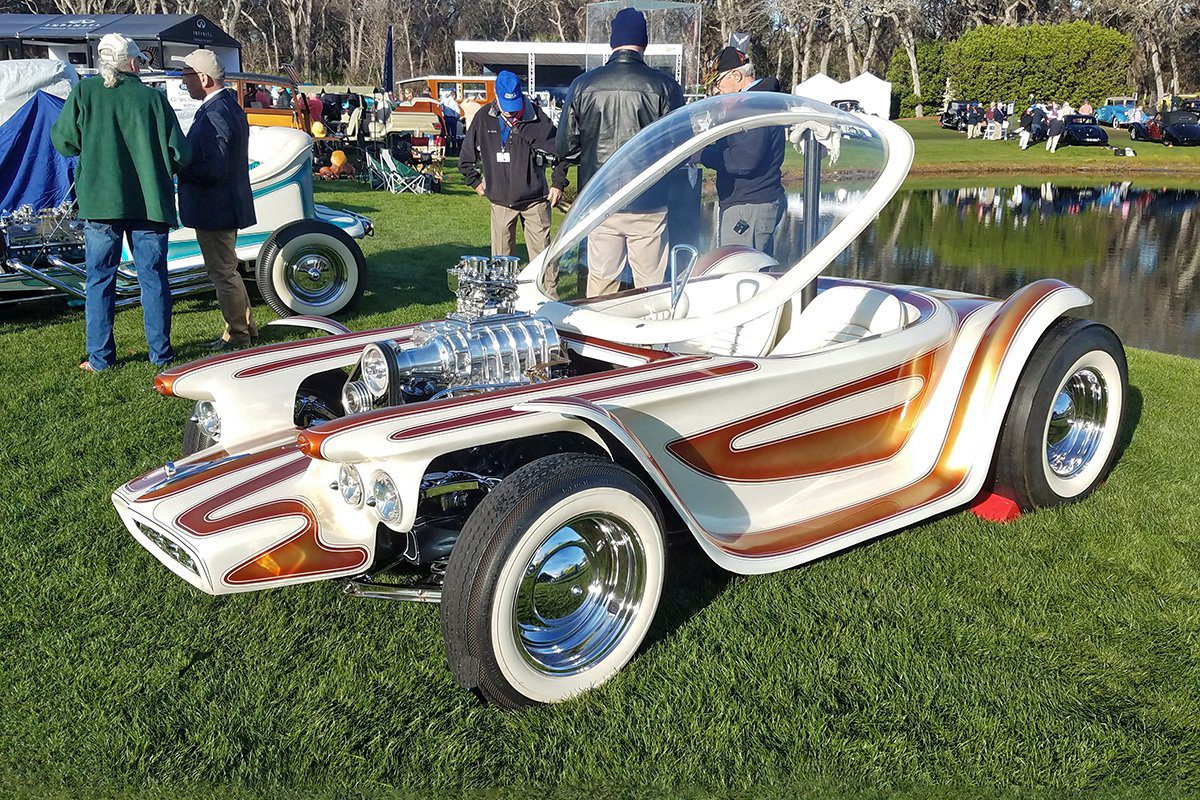 Ed “Big Daddy” Roth had a flair for the dramatic. Perhaps best known for his rascally rodent, Rat Fink, which served as the unofficial mascot of early-’60s hot rodding, Roth crafted a series of edgy and over-the-top customs that shook the hot rod world to its core. In doing so, Roth didn’t push the envelope – he re-folded it into origamis of outrageousness.

And none were more far out and groovy than the Beatnik Bandit.

A sketch in Rod & Custom proved a starting point from which Roth massaged and tweaked the design to his liking. He settled on a layout akin to a roadster commissioned for George Jetson.


Wedged between the Bandit’s long fenders was a 303c.i. Olds V8 topped by a GMC 4-71 blower and dual carbs. Power moved through a four-speed transmission. What wasn’t painted was chromed, including most of the exposed engine and all of the front suspension bits.

To form the body, Roth used a combination of plaster (to create a mold) and fiberglass cloth. Recently unearthed images from the Hot Rod archive show the process, a blend of Renaissance-era sculpting and drywall mudding. By the end, Roth had used nearly a ton of plaster and 40 yards of ’glass. The beautiful white-and-root-beer scalloped paint job was handled by Larry Watson’s House of Style. Short on cash, Roth traded Watson the paint job for a cache of Rat Fink T-shirts.

As for the Bandit’s signature bubble top, dueling origin stories vie for the truth. Initially, Roth tried to fit a canopy salvaged from a B-36 bomber. When that didn’t work, he tried to form a custom Plexiglas canopy by blowing a plastic sheet up in a pizza oven. That’s the Roth-esque yarn. The alternative tale is a that a commercial plastic company pulled it off. To raise and lower the bubble one simply toggled a small antenna that sprouted out of a front fender.

The driver controls employed by the Bandit were as unconventional as its shape. Roth eschewed a traditional steering wheel and floor pedals for a center-mounted joystick that commanded steering, throttle, shifting, and braking. Instrumentation was limited to a single round gauge. And the beautiful white upholstery? Stitched by legendary trimmer Eddie Martinez. From the moment the Beatnik Bandit debuted on the pages of Car Craft magazine in May 1961 it turned heads and dropped jaws; later that year it was featured in Rod & Custom, Popular Science, and Popular Mechanics. With interest growing, Roth hit the show car circuit, towing it behind his Cadillac hearse, which doubled as his motel room. Please, no jokes about being dead tired…

Over the years the car was sold and resold – once to car show impresario Bob Larivee – painted green, then restored to its original condition in 1985. It has been displayed at the MovieWorld Cars of the Stars museum and in Harrah’s Automobile Collection. Today, it is on display at the National Automobile Museum in Reno.

“It was part of that counter-culture movement that was blooming in the ’60s, and Roth was part of the Beat Generation coming out of the ’50s and continued on from there,” explained Jay Hubbard, automotive collections manager at the National Automobile Museum.

As famous as the Bandit was as a real car, it was perhaps even more popular as a miniature. It was one of a Revell’s best-selling model kit for years. When Mattel decided to make Hot Wheels, they included the Beatnik Bandit as part of its original 16 offerings in 1968. Over the years Hot Wheels updated the casting for various anniversary celebrations. No matter the version, all were big sellers. Automotive historian Tony Thacker, who penned a book on Ed Roth, put the Bandit in perspective: “The ‘Beatnik Bandit’ was the first model kit I ever bought and no doubt it impacted millions of other kids as it did me. It was outrageous for the time and unlike anything anybody else was building. Surely one of the most historically significant customs of all time.”

Noted chronicler of American culture, the late Tom Wolfe (he of “The Right Stuff” fame) wrote a famous short piece on custom car ethos, “The Kandy-Kolored Tangerine-Flake Streamline Baby.” In it, Wolfe interviewed Roth at his SoCal shop. He describes the six-foot-four bearded giant as “a rather thorough-going bohemian.”

But Wolfe’s description of the Beatnik Bandit is particularly on point: “Roth’s designs are utterly baroque…his Beatnik Bandit is one of the great objects of customizing. It is a belaisian* [a style of satirical humor characterized by exaggerated characters and coarse jokes] tour de force – a 21st century version of a ’32 Ford hot rod roadster.”

Ed Roth himself has already earned Goodguys Legends of Hot Rodding accolades. It’s only fitting his most famous custom joins the club.