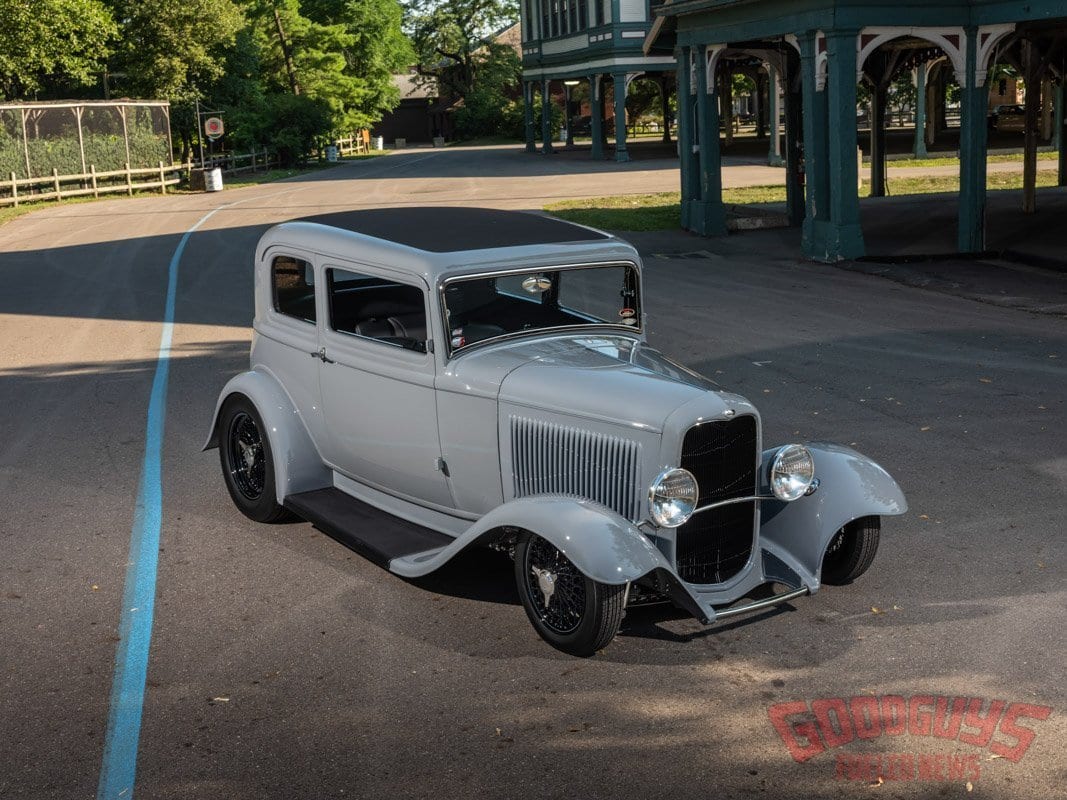 Phil Becker brought his wife, Debbie, with him to the Goodguys 22nd PPG Nationals in Columbus, along with “the other woman” in his life – Miss Vicky, the ’32 Ford Victoria that has been in the Becker family since the 1970s. Miss Vicky emerged early this year after a multi-year makeover in Dave Lane’s Iowa-based FastLane Rod Shop and quickly earned a Great 8 spot at the Detroit Autorama. Could it repeat the Street Rod of the Year success Phil and Dave had with the Beckers’ ’32 coupe back in 2011? It could, and it did, beating out a field of worthy finalists to emerge as the Goodguys 2019 Classic Instruments Street Rod of the Year. Phil bought the Vicky in parts back in 1975 and finished its first version as a street rod in 1982. He and Debbie and their two sons, Timm and Todd, put many miles on the car through the ’80s and ’90s, building countless memories along the way. Phil began a rebuild of the Vicky in 2014 and got partway into it before deciding to hand things over to Dave Lane for completion. Dave is a skilled and meticulous builder no matter what type of car he’s crafting, but he’s particularly adept at Deuces. He knows exactly where to cut, massage, tweak, and fabricate to get them to sit right, look right, and knock people out with subtle, refined detail. Armed with design help from e. Black Design Company, Dave dove into the project with gusto. Phil’s lifelong interest in sprint cars inspired his decision to start the rebuild using a Moal Coachbuilders chassis with a torsion bar suspension. Dave made some selective modifications to the frame and finished it using a 5-inch dropped and drilled front axle, Winters quick-change rearend, and QA1 shocks both fore and aft. The front disc brakes were covered with custom vented enclosures to resemble Ford drums, while the rears incorporated Buick-style covers from So-Cal Speed Shop. The 15- and 17-inch Dayton wire wheels were wrapped in Diamondback tires and finished with weighted, bearing-mounted, self-aligning knockoffs machined by Greening Auto Company. Though the engine is a rather conventional small-block Chevy, it looks anything but normal with a ground-smooth block and heads, custom valve covers and breathers from Pinkee’s Rod Shop, and coated TruRam manifolds from Speedway Motors. The Borla 8-Stack fuel injection system is topped with custom air cleaner assemblies designed by artist Jimmy Smith, while cloth-covered wires and Bakelite wire holders from Scott Sullivan add vintage-style detail. Bowler Transmissions built the 4L60E overdrive automatic. Dave Lane is a master at manipulating Deuce sheet metal and worked plenty of tricks on the Vicky, from straightening the front roof line reveal and lowering it 3/4-inch, to chopping the windshield frame a like amount, to pie-cutting and lengthening the hood. He also cut and recontoured the front fenders, dropped and narrowed the grille shell (which was treated to a truck-style bullnose and custom insert), curved the spreader bars and gas tank, and made scores of other tweaks that might need to be pointed out to be noticed, but also make all the difference in getting the car look “right.” This is the first time Dave has ever farmed out the painting chores on a project, but it’s obvious that Adam and Tyler Krause did an incredible job on the car’s final bodywork and laying down the Axalta Nardo Grey paint. Finishing touches came from Greening headlight buckets on a narrowed and dropped bar and ’32 Chevy taillights on custom stanchions. The approach was similar inside – a lot of modifications, but everything subtle and well-integrated. A case in point is the center-mounted ’39 Lincoln Zephyr gauge cluster and corresponding glove boxes, all massaged to fit under the original ’32 Ford dash top and look at home. Classic Instruments gave the cluster a custom facelift and brilliant new illumination. A matching ’39 Zephyr steering wheel was downsized 3-inches and mounted atop a custom column. Dave built custom seat back panels and walnut wood bases for the front bucket seats, which were stitched (along with other interior soft pieces) in supple black leather by Schober’s Hot Rod Interiors. No detail was overlooked, down to the custom door handles, window cranks, and dome light by J&B Microfinish. Like so many other Fast Lane builds, the Becker Vicky has a subtle, understated look, but reveals a wealth of details and incredible craftsmanship wherever you look. The Beckers faced some stiff competition for the Classic Instruments Street Rod of the Year title, including George Poteet’s America’s Most Beautiful Roadster-winning ’36 Ford and a trio of beautiful Deuces that rounded out the Top Five. In the end, the refinement, finish, attitude, and overall package put this subdued Vicky over the top to capture the Goodguys 2019 Classic Instruments Street Rod of the Year crown.