In the mid-1970s, a group of executives from the automotive industry (led by Henry Ford II) visited the Volvo factory overseas. Ford had a Lincoln Continental Mark IVs shipped overseas to serve as their transportation and little did they know that big two door land yacht coupe would inspire the Volvo team to build a their own coupe – the 262C which was based on Volvo’s successful 200 Series platform. With a limited production run in mind, the Swedish automaker farmed out production to Italian coachbuilders Bertoni of Turin, Italy. When Bertoni was done with the prototype, a sleek and stylish coupe was born with a roofline that resembled a chopped American hot rod. It was a bold and daring design by late 70s standards. It was billed as Volvo’s “first luxury coupe” and featured an elaborate, almost art deco leather and wood interior. It was indeed luxurious and rare but it was woefully underpowered with a gimpy 2.7 liter, 127hp V6 – it couldn’t get out of its own way.

The 262C Production run ended in 1981, making them highly collectible within niche circles. In total, only 6,622 cars were produced. You can count Erland Christopherson as a true 262C enthusiast and collector. A European born automobile enthusiast, Christopherson has several of these Volvo’s. But the one you’re looking at today is guaranteed to the most hot-rodded 262C in history.

Christopherson is into all kinds of cars and even has a cool gearhead-centric YouTube show called “The Silent D Motor Show.”  He became aware of East Bay Muscle Cars and owner Steve Keefer through Instagram. It’s amazing the impact social media has had on hot rodders. Its now easier than ever to connect with kindred spirits worldwide. After a few direct messages back and forth, Erland told Steve of his LT1 swap idea and the deal was sealed. And Keefer and his talented team were just the guys for the coupe’s transformation. Looking at it from the outside, you would hardly know anything was unique about the coupe other than its sexy factory lines. The wheels appear to be exact copies of the factory OEM’s but were cut to 17” diameter by EVOD Industries from solid blocks of aluminum. Astute car guys will notice the Wilwood brake calipers peeking through a slot – a dead giveaway something wicked is brewing. The mint interior was kept 99 percent factory and why not? It’s so stunning it would have been foolhardy to change it. The shifter mechanicals are from a C5 Corvette “direct injected” – so it won’t get confused with the 90’s version of LT1. Shift points are like European butter. That’s about it for interior mods. Check out those cool c-pillars – they look like something from a Milan fashion magazine. Performance wise though – this is one bad Bertone courtesy of a 6.2 liter Chevy LT1 swap. One of Steve’s shop fabricators at EBMC overheard us talking about how everything fit so well under the hood and barked “You have no idea how complicated making that motor fit was.” Yet take it in with a sustained gaze and it looks factory-installed nestled in between the shock towers. Like all EBMC builds – the devil is in the details and this coupe has plenty right down to the special LT1 and Bertoni crown on the engine cover. The custom 1978 Volvo 262 C 6.2 badges are bitchin’! Suspension wise, a serious amount of modification was necessary with such a substantial horsepower infusion. To handle the LT’s 460 ponies, JRZ adjustable struts were used along with a beefier one inch sway bar. Bolted underneath the ass end is an Art Morrison narrow track IRS! EBMC built all mounts and frame strengthening for it. The factory front subframe nearly runs back to the X-pipe making it a whisker away from a full chassis makeover. There’s something different about the exhaust too. The Stainless steel tube starts as 2 ¼-inches leading to a custom EBMC X-pipe which then flows to a single dual cross-flow Magnaflow muffler before merging to a single three inch tip delivering the spent gasses. It sounds really good yet offers a subtle growl at reasonable rpms. It’s these subtle nuances that make this car so bitchin’. It’s by far the most unique car we have written about in our short history here at Fuel Curve. 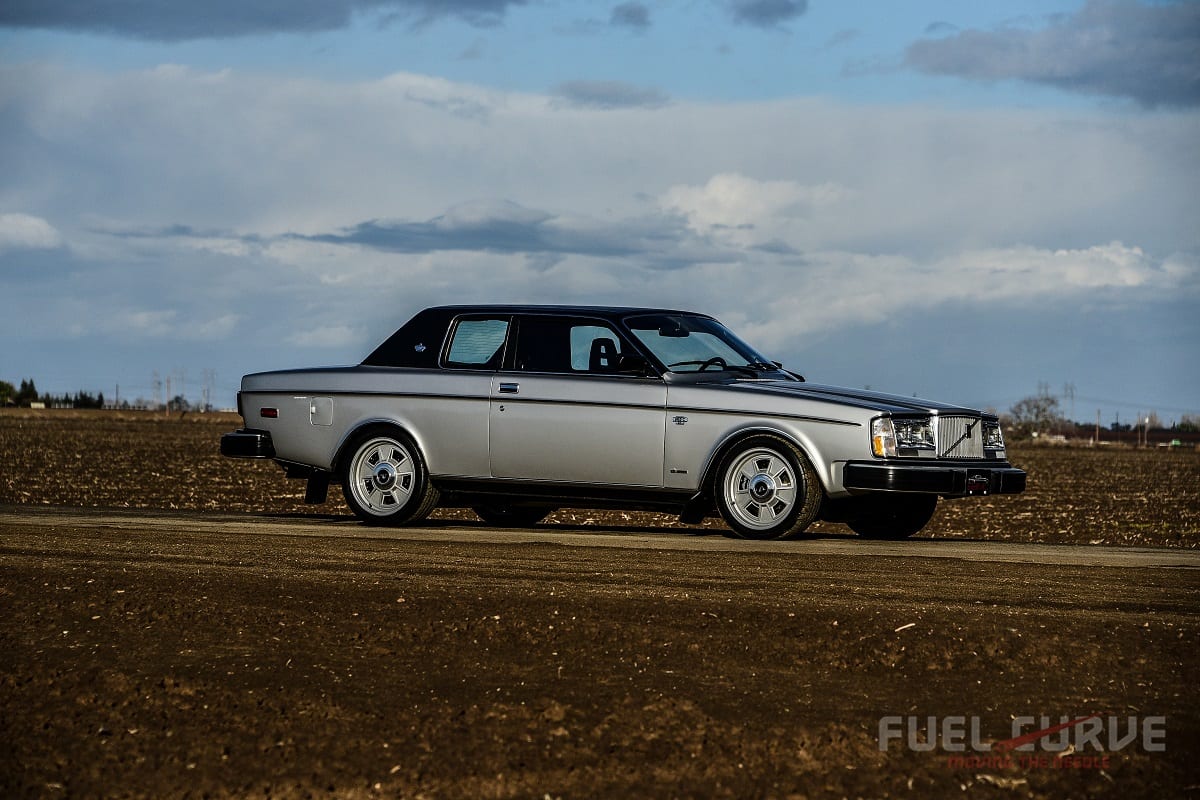 When we drove out to the shoot location, it rode like a sporty muscle car. Nothing too crazy – just enough muscle and might without going overboard. The handling and shift points were spot on. But as you can see from the video clip, it’s perfectly capable of laying down a 200-foot patch of rubber. With a build like this, you need several things. You need an owner willing to go the extra mile in financing the project and you need a builder who exhibits superior craftsmanship and vision but also knows when to stop for subtlety’s sake. Christopherson’s Volvo is a testament to both men’s strengths. We wonder what Volvo’s then-chief designer Jan Wilsgaard would think of it. Scratch that. We know he would dig it! What’s not to like?