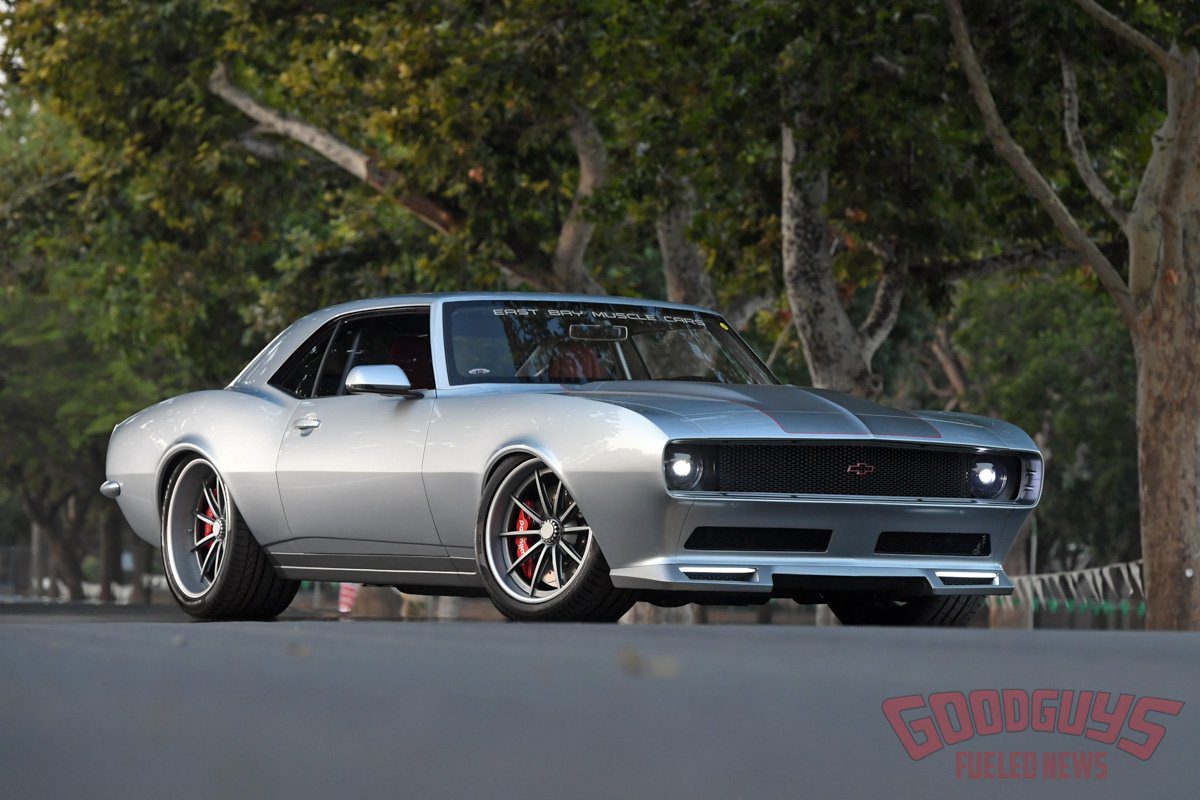 Can a potent, powerful, and just-plain badass street machine be beautiful? Absolutely! Just take a look at “Rhodium,” the stunning ’68 Camaro built by East Bay Muscle Cars for Ryan Gates, which captured the Goodguys 2021 BASF America’s Most Beautiful honor at the 34th West Coast Nationals. Named after the rare, noble, silvery-white chemical element associated with platinum, “Rhodium” is a true piece of precious metal and a stunning example of custom craftsmanship. The beautiful pro-touring machine went up against a strong field of contenders and an exceptional Top Five to claim the BASF America’s Most Beautiful crown, an award formerly known as America’s Most Beautiful Street Rod, which is now in its second year of expanded eligibility, welcoming top-tier builds through 1987 vintage. This is a Camaro that goes well beyond the typical restomod build and enters into coach-built territory. In fact, the body is widened a total of 5-inches with modified front fenders and rear quarter panels, and door skins altered to flow with the new shape. The front fender arches are also raised, while the custom hood incorporates a cowl-induction bulge with a trick 1LE-style insert. The one-off grille was CAD designed and machined by Alumicraft, while the taillight panel (sitting below a custom spoiler and above a one-off diffuser panel) is another one-off billet piece machined by EVOD. Flush-mount glass, 2018 Mustang side mirrors, and refined body lines are just a few of the additional tricks that shine courtesy of the PPG Dolomite Silver finish expertly applied by the team at Compani Color. The beauty is more than skin deep, as the Camaro is built around a gStreet full-frame chassis from Chris Alston Chassisworks. This impressive foundation includes a cantilevered rocker-arm independent rear suspension, a performance-bred front suspension with rack-and-pinion steering, four-way adjustable Varishock coil-overs, and 15-inch Wilwood disc brakes. Everything works in concert to firmly plant the 19×10.5- and 20×12-inch Forgeline GT3C wheels and Pirelli P-Zero tires. Potent performance comes from a GM LT4 engine which has had its factory supercharger replaced with a sheet-metal intake and reverse-drive ProCharger setup. It’s all topped with a trick 3D-printed engine cover designed in-house, with Ultimate Headers leading to a custom-built and Cerakoted 3-inch exhaust system. A Tremec T56 Magnum six-speed sends power to the Strange rearend. The inside is every bit as custom – and as beautiful – as the rest of this Camaro, featuring a one-off dash with Dakota Digital instruments and a Sparc Industries wheel atop the Ididit column. DJ Designs created a European feel throughout the cabin, covering the Recaro seats and custom paneling with high-quality Relicate leather and incorporating a host of modern details to create a modern supercar feel. As a metal, platinum is worth more than gold. We’d be hard pressed to put a value on the “Rhodium” Camaro, but given its newfound stature as the Goodguys BASF America’s Most Beautiful winner, owner Ryan Gates might just consider it priceless. Congratulations to Ryan, and to Steve Keefer and his team at East Bay Muscle Cars, for capturing this elite honor, part of the Meguiar’s Top 12 for 2021.