Why is that first cars or high school rides leave such an impression? Chances are that many of us wouldn’t last a day on a road trip in the vehicles we drove back then. Most of them were likely rattle traps with noisy exhaust, ill-handling suspension with worn tires, and foul-smelling interiors. Mike Mitchell has fond memories of his high school ’69 Mustang but he wasn’t tied to building another one just like his original car, though it did embed a love for the Ford pony car. A few years ago he found a nice ’67 Mustang that he planned to have restored with a little more power and performance. To handle the updates, he handed the Mustang off to the pros at Roseville Rod and Custom, where he also noticed a stalled 1970 Mach 1 Mustang project that was languishing in the shop.

The Mach 1 really struck Mike, so he made an offer on it which was accepted and had the Roseville team continue with its restoration while putting the ’67 on hold. At first, the plan was to continue with a restoration and the car was very close to receiving a fresh coat of red color until fate intervened. One typical afternoon, Mike was sitting at a stoplight not far from home when a stock-looking red Mustang pulled up and stopped next to him. The car looked great, but it just seemed to Mike that it was rather pedestrian in a classic kind of way. It was certainly a nice car, but it looked like so many other Mustangs. It had no intimidating rumble, the stance was high, the 14-inch wheels seemed tiny, and it just didn’t rev Mike’s motor like he thought a restored muscle car should. This, of course, all makes sense as Mike doesn’t own anything ‘stock’ and as the cofounder of Sinister Diesel, he’s just not used to standard OEM performance or appearance.


At that point, he knew the restoration needed to stop. He called the Roseville crew, and even though the car had all the bodywork complete and would soon be painted, he explained that the resto needed to pause until a new plan was put in place. And that plan was to turn the 1970 Mach 1 into a pro-touring machine with updated performance and looks.

With serious handling capabilities as a major goal, the Roseville team set to work strengthening the unibody structure with a complete Pro-G system from Heidts for the front and rear. A set of six-piston Wilwood calipers squeeze 13-inch rotors up front with 12-inch rotors in the rear. Capping off each corner is a set of trick Budnik wheels (18- and 19-inch) wrapped with Toyo rubber (235/40 in front with 275/35s out back). With all of the new handling proficiency on tap, there was no reason not to load up on horsepower. Mike chose a 510-horsepower 427c.i. from Ford. This engine is based on a 351 Boss block, though, with a 4.125-inch bore and 4.00-inch stroke working with a hydraulic roller cam spec’d at .594/.618 lift. For induction, a Super Victor intake was machined to accept a Holley EFI system tuned by Autotrend EFI and topped with a factory Mach I scoop. With autocross and spirited driving in mind, a Tremec TKO600 was fit between a pair of 2013 Mustang seats and stirred through a one-off billet shifter. Instrumentation from Dakota Digital was incorporated, and a Vintage Air system keeps the leather-wrapped office comfortable. Dave Putnam is responsible for the interior stitching and design work. Finishing touches include a set of Wilwood pedals and a Budnik steering wheel crowning an ididit colum. 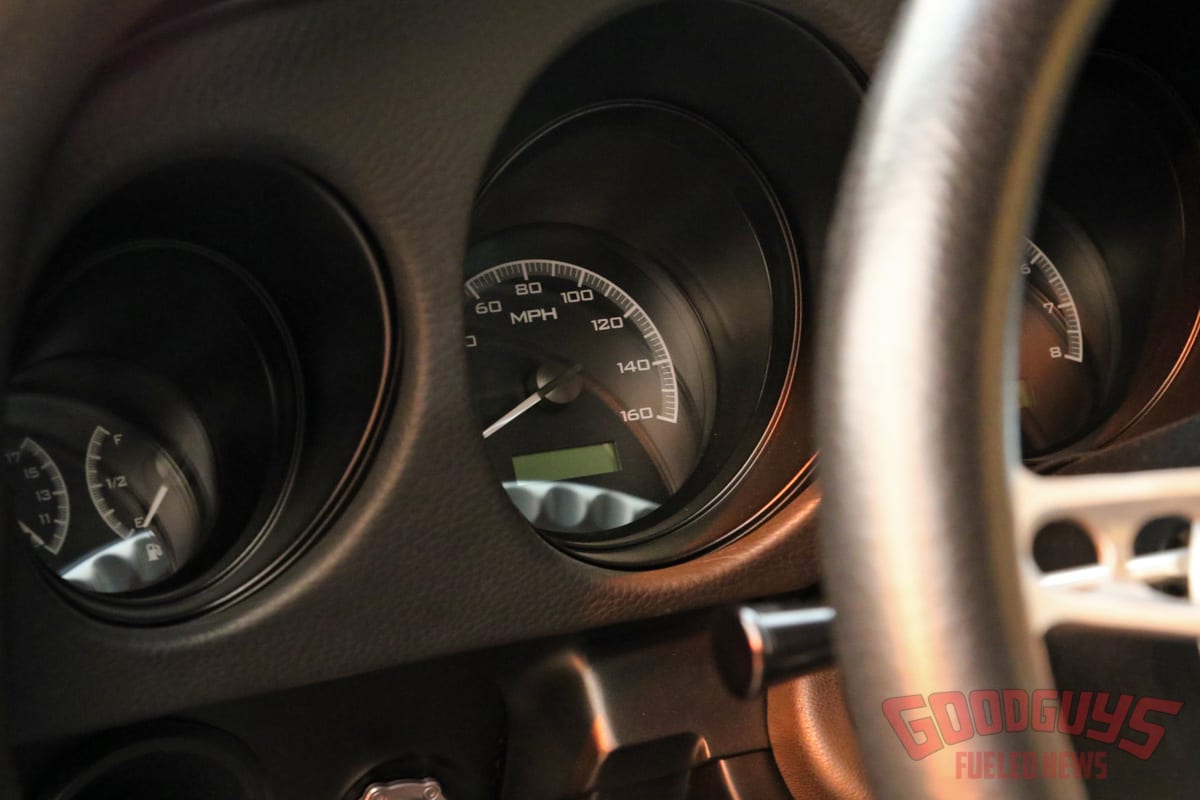 The body is unmistakably 1970 Mach 1 Mustang, but the Roseville team refined its style by shaving the drip rails and adding a front splitter and ground effects. Modern door handles were molded in place and the bumpers were narrowed and pinched inward. Fittingly, Mike chose a custom PPG blend called Sinister Blue that was applied by Joe Vaca at Roseville. The hue is electrifying and at the opposite side of the spectrum from his original plan for a restored, red Mustang. With the “on second thought” 1970 Mach 1 on the street and in Mike’s garage, whatever became of the ’67 restoration project? Well, he’s been having so much fun with the power, performance and handling of the Mach that he’s decided to build the ’67 into a serious track-day car that could also be tamed a bit to drive on the street. Roseville is already well on their way with that project and we can’t wait to see both of the Mustangs on our autocross track next year.