1961 American Rambler – What Goes Around Comes Around

No matter who you are, walking past the car you learned how to drive in as a teenager can certainly turn your day around. Your mind drifts off, reminiscing who was there to teach you how to shift into second gear or cruising down the streets of your hometown with your friends piled in the backseat. When Mark Pait saw this 1961 2-door American Rambler for sale last year, he instantly told his wife: “You’ve got to see it Carol!” Within an hour the car was purchased and headed for Smithville, Kentucky. Carol just couldn’t let it slip through the cracks. With little history of this car, the chopped top Rambler was restored by two brothers in Indiana. The extended visor, tucked and smoothed bumpers, suicide doors, flush glass, dreamy color and stance captured Carol’s memory as she grew up driving her father’s station wagon. “We adore the car, we just go outside and sit and just look at it” she says. “People walk by this wagon and instantly smile. They stop and tell us how their aunt or grandma had one, all kinds of stories”. “It’s definitely a ‘her’”, she says as they refer to the Rambler, “look at those curves!” The Rambler houses a 350 Chevy engine, Edelbrock 4 Barrel Carburetor, and Assault intake manifold. The suspension is completed with Ridetech airbags all the way around, while also incorporating a Mustang II front end and Chevy S10 rear end, General Motors disc brakes and Rocket Racing wheels at every corner. Within the interior, the Rambler is finished off with custom bucket seats and console, Vintage Air climate control, power windows, Auto Meter Gauges, and a Lokar shifter. 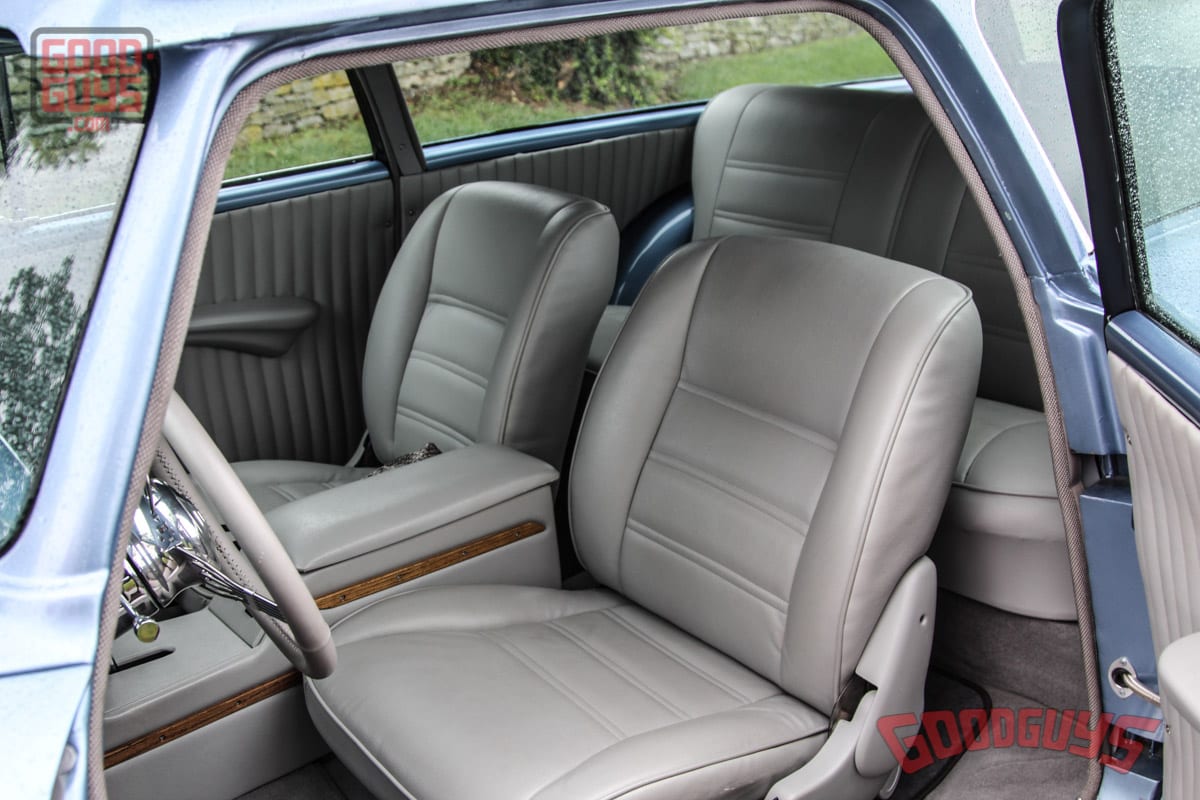 Carol adores the suicide doors, modeling for us not only the coolness factor, but how much space they allow for. The car is so easy to ride in and there is plenty of room for their grandchildren to tag along enjoying all the custom car life has to offer. The Pait’s had been attending car shows and rod runs for the past 17 years and we stumbled upon their gorgeous Rambler inside at their first-ever Goodguys event in Lexington, Kentucky. The Goodguys Kentucky Nationals was their first-ever Goodguys event. We can’t wait to see them next season and the updates they plan to do. It’s only obvious that someday their grandkids will want the car, having fond memories cruising down the street in grandma’s 1961 Rambler! That’s how we all get hooked right? After earning her engineering degree, Allison Schneider started in the automotive industry in March of 2016 at a Goodguys Rod & Custom event with Team Speedway, the AutoCross racing team sponsored by Speedway Motors in Lincoln, NE. Through A&P Productions LLC, she handles logistics, public relations, media and more for team members including two-time Indy 500 winner Al Unser Jr and nine-time Pikes Peak Hillclimb winner Robby Unser. Her love affair with all American Muscle Cars began in 2005 when a brand new Ford Mustang was on display at Speedway Motors - America’s Oldest Speed Shop. The late and legendary “Speedy” Bill Smith personally autographed her Speedway Motors catalog, which of course is packed full of racing and rodding products.