The creation of “Gennie”, this 1985 Dodge Ram D350 heavy hauler, was built as a necessity for Humberto Ortiz. Not only to serve as a trailer-hauling parts runner for his shop Vulcan Specialties in Lubbock, Texas, but also as a reliable, comfortable and downright awesome family commuter. This story begins eight years ago when Humberto was in the process of building a traditional hot rod truck with an early Hemi powerplant. All the plans were laid out for it to ride on a full custom frame with air ride, a solid front axle, as well as a serious chop and channel job while rolling on big and little whitewalls.

That is until a baby came, followed a few years later by a second child. When it was time to get back to the hot rod pickup, Humberto realized it was no longer a family efficient vehicle. 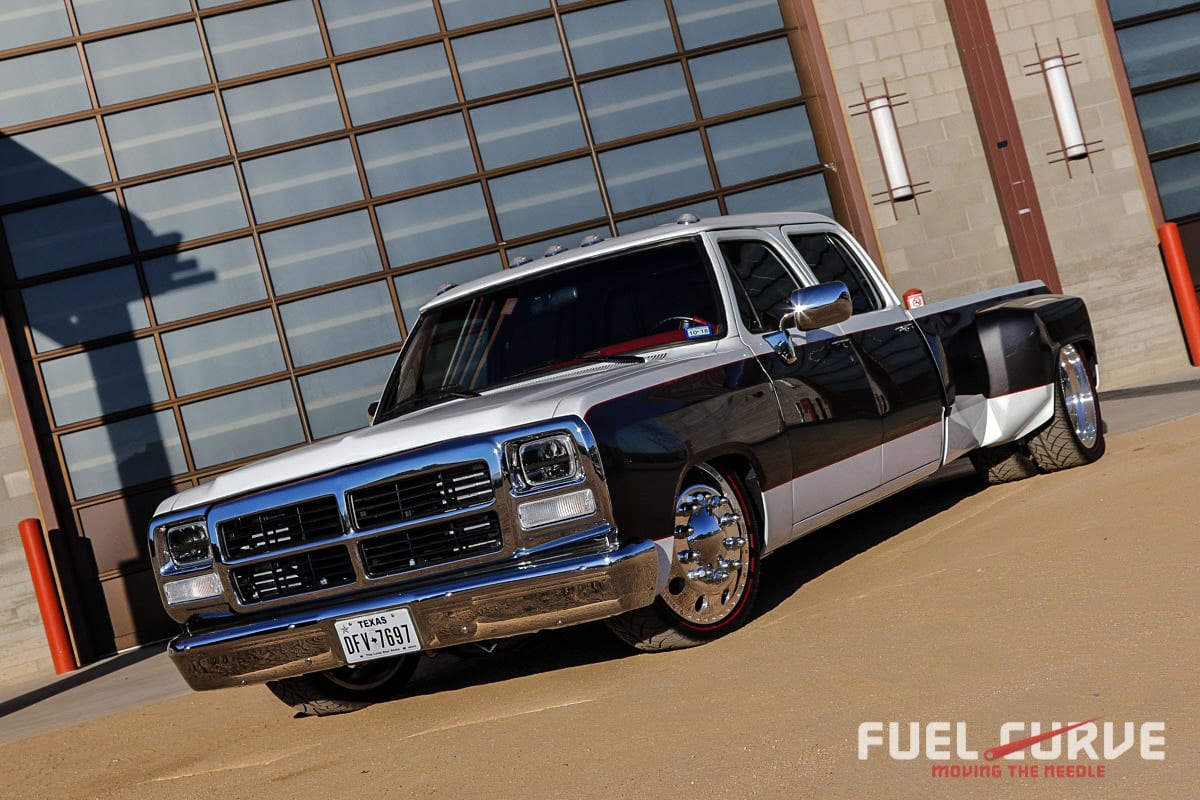 He then remembered an old idea about building a first-gen Dodge crew cab powered by a 12-valve Cummins engine. Ortiz owned one years back but dreamed about slamming one on the ground via bags while sporting big Alcola wheels.

With the skills, tools, ability and necessity, that old dream became a reality and in late 2014 “Gennie” was purchased. Over the next two years, between working on customer projects, Gennie slowly came to life and at the 2017 Lone Star Throwdown in February, she made her official debut. During those two years, serious frame work was preformed to get that picture-perfect slammed stance. The front was modified with a new crossmember, flat plate control arms and Contitech 4-ply airbags. New backhalf frame rails were fabbed up and done in a way to eliminate the need for a giant C-notch. A flat bed surface was needed with the intention of a fifth wheel hitch being installed to tow a trailer, or for the motorcycles to be loaded up for a weekend getaway. A tubular 4-link parallel setup with Firestone air bags and a diagonal link bar keep the Dana 60 square and true. Ride height is manipulated by an Accuair’s E-Level management system. Utilizing a Wilwood master cylinder, an air over hydraulic disc brake system was put in place which are tucked behind the 22-inch American Force Classic wheels wrapped with Nitto tires sporting red stripes. You can check out the intensive and meticulous custom frame work documented here. Power was an obvious choice going with a 5.9-liter, 12-valve B Series Cummins. It is largely stated to be one of the most dependable diesel burning engines ever built for street driven vehicles. A variety of custom touches accent the exterior in the forum of Chevy C/10 front and rear bumpers, Chevy C/30 dually fenders, a Suburban roof skin and a custom sheet metal engine bay. The Line-X bed features a raised sheet metal floor with plenty of storage compartments as well as Back Bone Industries’ aluminum tie down railing along the bottom edges. It’s finished in Sherwin Williams bright white and Granite Grey paint to match the original two-tone scheme. Relicate hot rod red leather outfits the interior stitched up by Mario’s Trim Shop in Lubbock, TX. The stock dash features a custom sheet metal bezel built by Vulcan Specialties and is stuffed with Classic Instruments gauges. Classic Instruments also custom-built the boost and EGT gauges for Gennie. The stock custom bolstered bench seats, steering wheel, shifter and door panels were also all modified before being wrapped in red. A Custom Sound Works audio system and A/C are also featured inside, but hidden for a smoother appearance. We got this killer D350 in front of our camera half way through it’s longest road trip, a 2,000-mile round trip trek from Lubbock, TX to Scottsdale, AZ with the family loaded up inside. Gennie performed flawlessly as each mile was chipped away and is now being driven daily as the official Vulcan Specialties shop truck. Check out this additional Gennie video feature by Salinas Photography