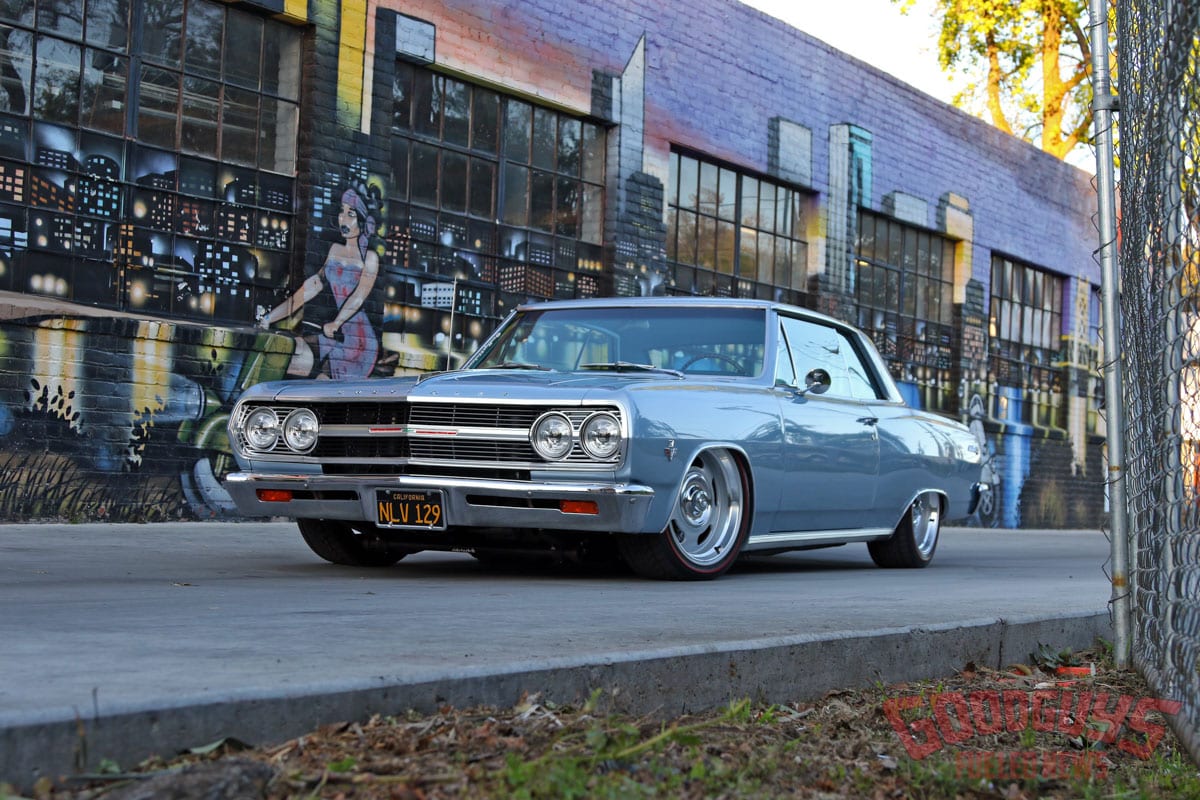 Sean Sullivan is like most you of reading this. He works a regular 9-5 as a Chevrolet car salesman and enjoys spending nights in his garage working on his car. And just like many of us, Sean was introduced to classic cars at a young age by his father, Jimmy. Sean recalls going to car shows with his dad growing up, which is still a tradition for him. Whether it’s a Goodguys national event or a local cars & coffee, Sean enjoys getting behind the wheel and driving his ’65 Chevelle – sullys65chevelle as it’s famously known online. Sean’s dad bought him a ’67 Camaro for his 8th grade graduation gift. It was a project car the two of them worked on for five years, finishing it up in time for Sean’s 17th birthday when he received his drivers license. Over those years, Sean installed a new suspension, transmission, brakes, wheels and tires, and interior, while his dad assisted with bodywork and rebuilding the 327c.i powerplant. Over the following years Sean turned the Camaro into more of a weekend drag racing car with a four-link rear suspension, mini tubs, and a roll cage. Going fast was fun, but Sean ultimately decided that a more comfortable street car sounded more appealing, so the Camaro was sold and Sean began building a ‘32 Ford five-window coupe from the ground up, while also tinkering on a ’63 Galaxie XL500 and a ’65 Continental. But the car he really wanted was a ’64 or ’65 Chevelle. Around 12 years ago, Sean met a man named Pat who owned a ’65 Chevelle that was just what Sean was looking for. The only problem: it wasn’t for sale. Sean contacted Pat regularly to inquire about purchasing the car, but the answer was always “no.” Eventually Pat stopped answering Sean’s phone calls. What Sean didn’t know was that his wife, Jennifer, had contacted Pat and struck a deal on the Chevelle to surprise Sean on his 40th birthday! The car was clean and solid, but Sean had plans to make it his own. Those plans included three key components – a striking stance, reliable power, and the perfect wheel-and-tire combo while still retaining a mostly stock appearance and feel. The new stance was achieved by installing RideTech Shockwaves up front, along with RideTech’s 2-inch drop spindles, Muscle Bar sway bar, and Strong Arm control arms. He used FOX shocks with RideTech air springs in the rear along with the stock 12-bolt 3.73-geared rearend. Proforged components and a CPP 500 steering box upgraded the steering and Baer Brakes were installed on each corner. Sean nailed the wheel-and-tire combo with REV 107 Rally wheels – 18×8-inch up front and 18×9-inch out back with 225/45 and 255/45 redline Nitto tires by Diamondback. Reliability comes from a GM LS3 engine, but it’s dressed to appear like a vintage small block with a factory dual-snorkel air cleaner hiding the 4150 throttle body filtered by a K&N air filter. The 376c.i. engine delivers 467hp using Holley fuel injection, a Holley HP ECU, XR275 Comp camshaft, Hooker exhaust manifolds, and Black Widow Venom 250 mufflers. A DeWitts radiator keeps the coolant flowing and the accessory drive system came from Drive Junky. Power is delivered to the rear wheels through a McLeod Super Street Pro clutch and Tremec TKO600 transmission. Sean regularly drives his ’65 Chevelle, so a reliable tune was necessary. Luckily Dave Ehrlich with AutoTrend EFI is right around the corner from Sean and got the setup dialed in. Sean’s ideas of retaining a stock appearance really shine on the body and interior. The Malibu Super Sport body was worked, finessed, and painted by Allen Sailors using PPG Glacier Gray hue. The interior is a flashback to 1965, aside from a couple components. The factory padded dash now holds a set of Dakota Digital Retrotech RTX gauges as well as controls for the factory A/C, which was upgraded by Classic Auto Air. The original seats, upholstery, and carpet are still intact as well as the factory SS wood steering wheel and original Muncie lockout shifter modified to work with the Tremec transmission. A wiring harness from American Autowire ties everything together. Aside from getting the Chevelle he always wanted as surprise birthday present from his wife, one of the experiences Sean holds dear is the recognition Leonard Lopez with Dominator offered when he presented Sean a Builder’s Choice Top 10 award at the 2017 Goodguys West Coast Nationals. That’s a pretty big honor for a street-driven machine that wasn’t constructed in a high-end shop. When asked if he would do anything different, Sean replied, “I don’t think so. I’s been an awesome project and it will always be a work in progress.”

Yep, Sean sure sounds a lot like the rest of us. Blowing Through the Years R...