There’s an old quote somewhere about how some people have great memories of the 1970s, and others never left. Kevin Livering can relate – his custom ’69 Corvette is a survivor of that decade’s wild and flamboyant street machine scene. 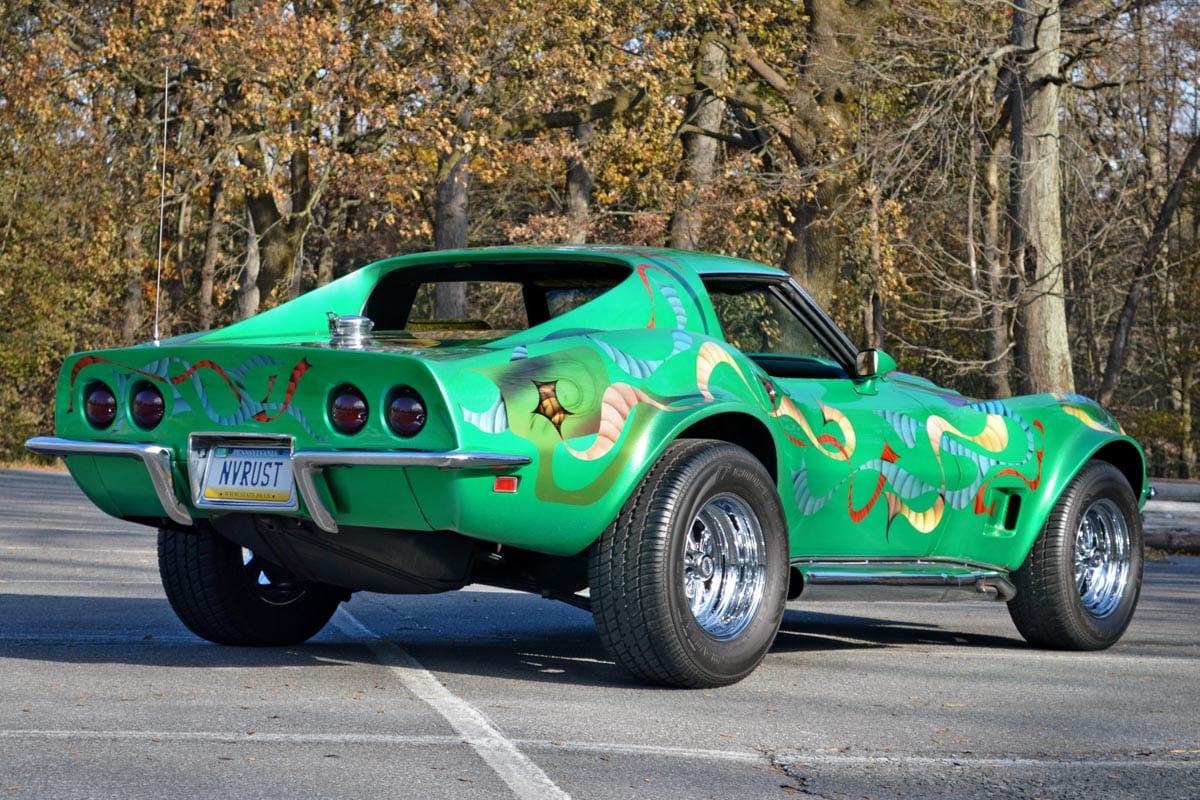 This real-deal custom ‘Vette is little changed since its candy green paint was laid down back in 1972. “I have owned the car since 1980, when I was a junior in high school,” Kevin says. “I traded my ’73 Monte Carlo ‘even up’ for the car! Although the car is showing signs of age, I have done my best to preserve this survivor from the crazy ’70s psychedelic era.” 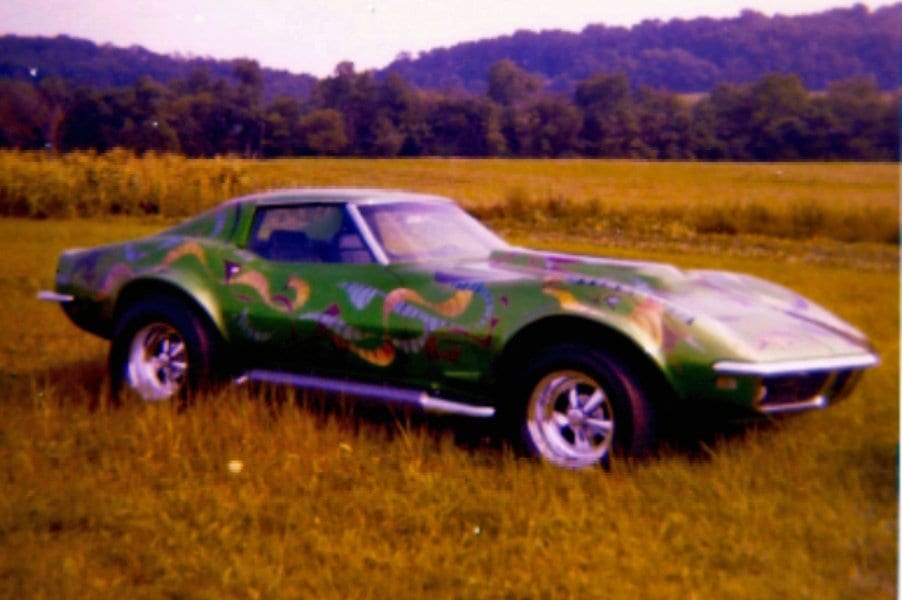 The Corvette started out as a Fathom Green coupe with a 350c.i. small block and a four-speed. The first owner blew the original engine, so a replacement 350 from a ’72 Impala was installed. The customization was done in 1972 by “Stoney” Galbach, from Manheim, Pennsylvania. “‘Stoney’ was well known among the racing circuit and for his custom paintwork on local midget race cars,” Kevin says. “I had the good fortune to meet ‘Stoney’ before he passed away several years ago,” Kevin says. “He shared with me that when he customized the ’Vette in 1972, the overall cost was $12,000! ‘Stoney’ installed flared fenders, an L88 hood, and 1973-style front fender vents. Air shocks raised the car up for the deep-dish Cragar mags with fat 60-series tires (later upgraded to radials). The custom paint started with a silver base coat topped with multiple coats of heavy metalflake and candy green paint. The ‘ribbons’ are painted on with candy colors and the paint was finished with 25 coats of clear lacquer. You also gotta love the crushed velvet, button-tucked interior, and shag carpeting!” 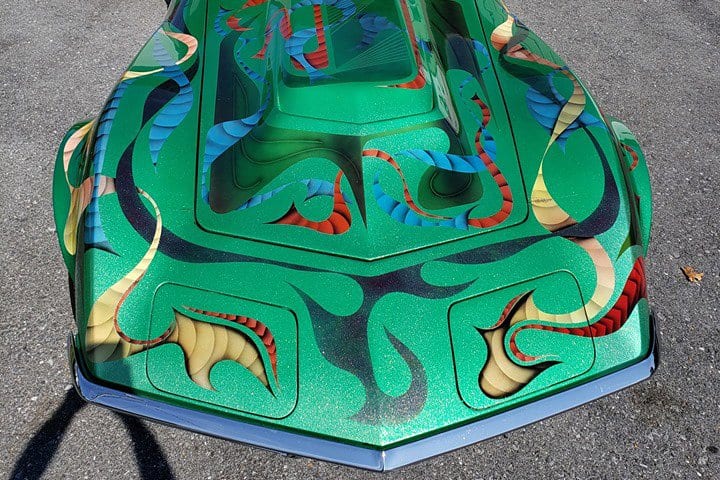 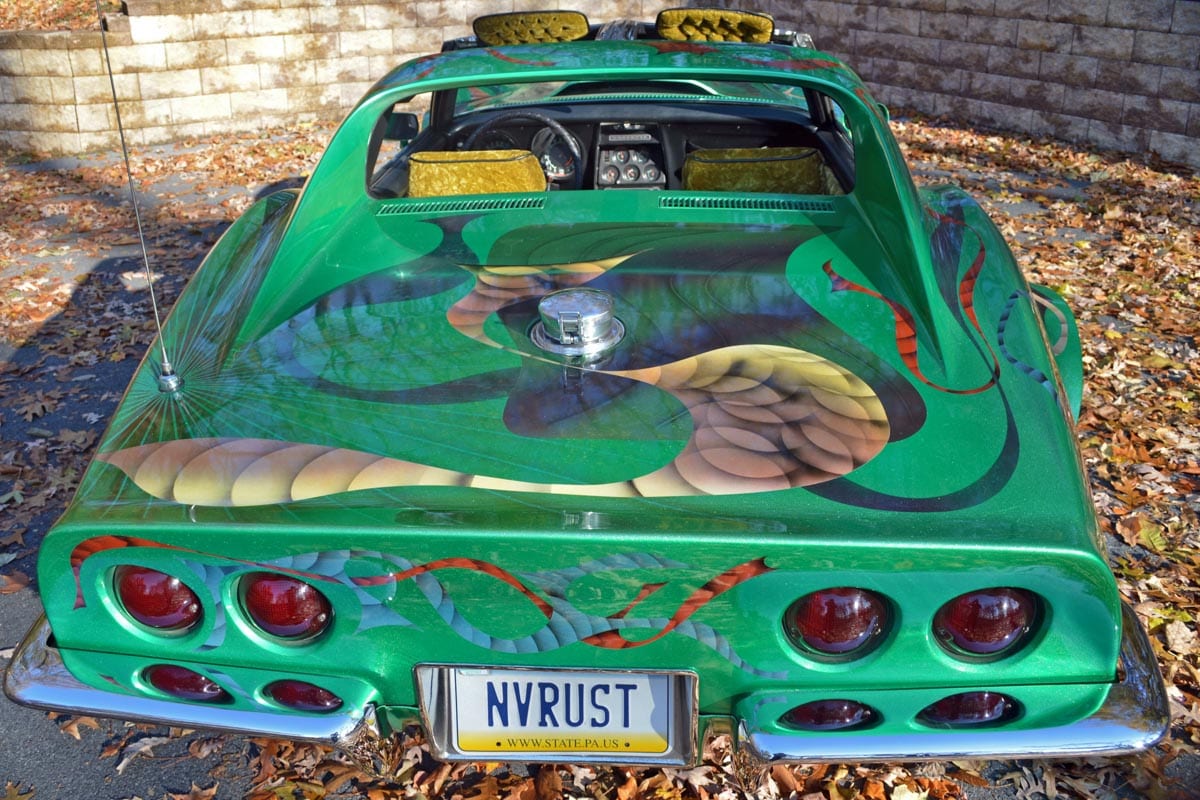 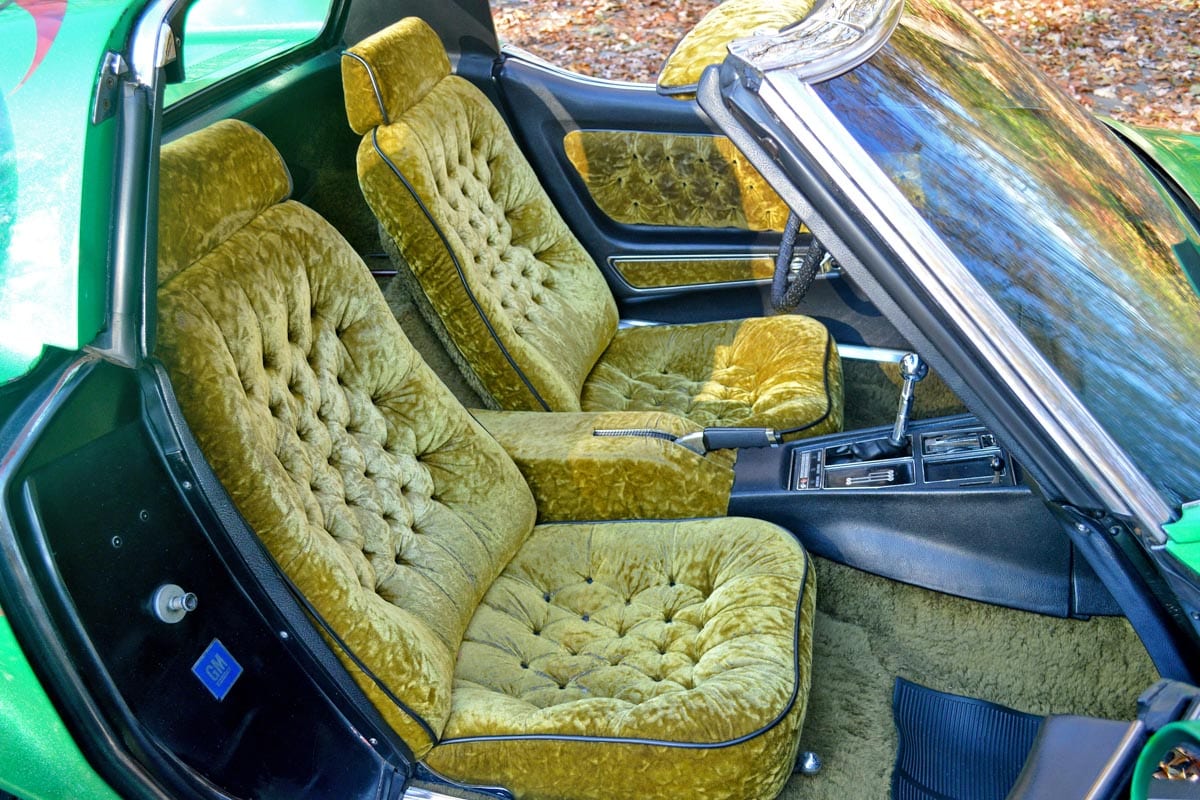 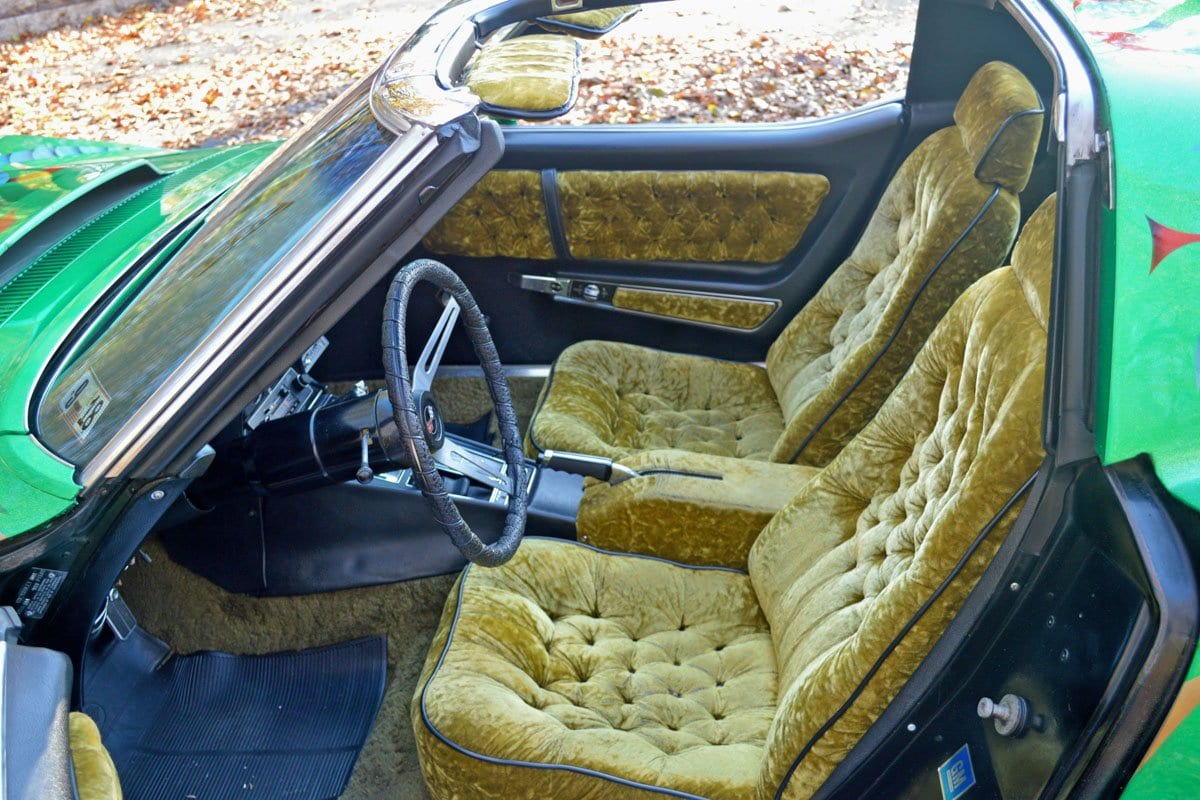 Limited use in recent decades has helped with the car’s preservation, but it was a regular driver in the ’70s. “Sometime in the ’70s the front passenger side suffered some minor damage that is barely noticeable,” Kevin says. “While driving the car in 2001, I hit a drain grate that partially tore off the driver’s side rear fender flare. A very talented friend and painter, Gary McGarvey, repaired the flared fender and was able to match the old paint.” Kevin says he treated the small-block engine to a rebuild 20 years ago, which included 10.2:1 pistons, a gear drive, aluminum heads, an Edelbrock intake with a 650 Holley double-pumper carb, Hooker side pipes, and a rebuild of the Muncie four-speed. The brakes and suspension were refreshed, and the original rear gears replaced with 4.11s. 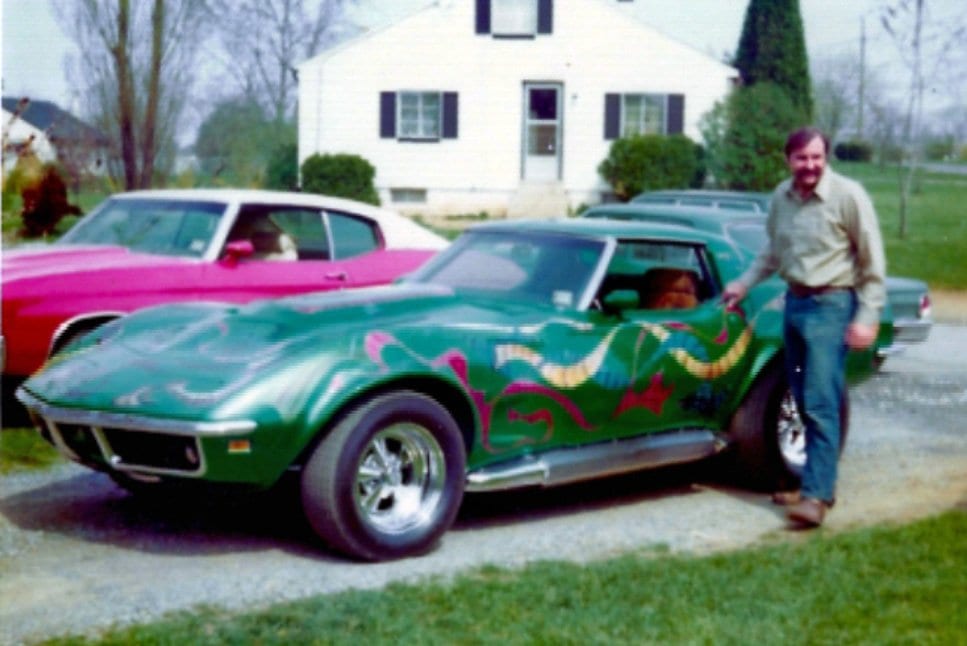 Kevin met the Corvette’s original owner during Corvettes at Carlisle back in 1990. Nearly 30 years later, shortly after the original owner passed away, one of his friends gave Kevin a stack of old photos of the car – both before and after it was customized, plus some of it competing in World of Wheels shows in the 1970s. He even passed along some old trophies.

“Although the paint’s clear coat is cracking and showing signs of age, it still looks relatively good,” Kevin says. The car has received increased attention in recent years as ’70s nostalgia grows, with showcases on a number of websites and in several magazines. It earned a spot in the Hershey Antique Auto Museum in the Age of Aquarius show last year and was featured at Corvettes at Carlisle in 2019. It’s also the August feature car in the 2021 Snap-On calendar.

“I have found that most people either love it or they hate it,” Kevin says of the psychedelic Vette. “People share their opinions with me either way! I never allowed the pressure or criticism to influence my love for the craftsmanship and work that was put into this car.

“No matter where I go, there is someone that has a story about the car or remembers the car from years gone by,” he continues. “I love hearing the stories and all the nostalgia. It makes me happy when I can bring a smile to people’s faces.” 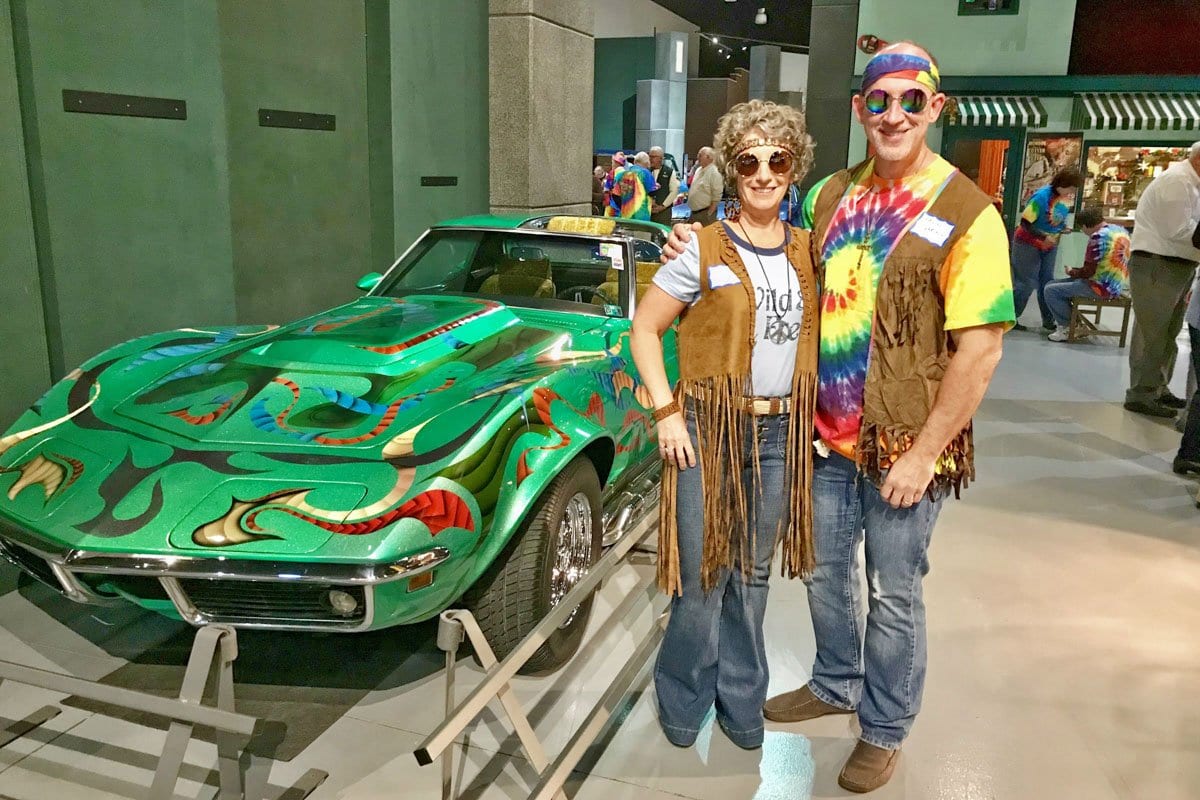