It’s rare for a drag racer to think farther ahead than the next quarter mile. The nature of competition is such that they focus on the next run, the next round, or the next race in front of them, not on the years and decades to come.

The same is true for race cars. Through the years, very few drivers or teams have ever wondered if their cars would become collectible or historic. If a car wasn’t going to be rebuilt for the next season, it was usually sold, parted out, or left to languish in the back of the shop – or the field behind it. So, imagine the time capsule you’d have if a Funny Car was rolled out of its trailer at the end of a season, placed in a dry, temperate building, and just left there for a few decades. That’s what you’re looking at on these pages.

Most readers don’t need an introduction to the late Tom “Mongoose” McEwen, the driver who piloted this bright red Coors-sponsored Corvette Funny Car in the ’80s. He was a legendary racer who had a decades-long career and became a household name when he and Don “The Snake” Prudhomme had their Funny Car match race wars in the ’60s and ’70s, complete with a Mattel sponsorship and matching Hot Wheels diecast cars. McEwen was a larger-than-life character with a gift for conversation and promotion equaling his driving skills. He was voted number 16 on the NHRA’s list of Top 50 drivers from its first 50 years. Ralph Haga grew up in central Illinois reading about the Snake-versus-Mongoose rivalry in rodding and racing magazines. Though he never got to see them at his local track in Cordova, Illinois, he did his best to support them with toy purchases. “I probably tore through 30 of those Hot Wheels cars,” Ralph laughs. 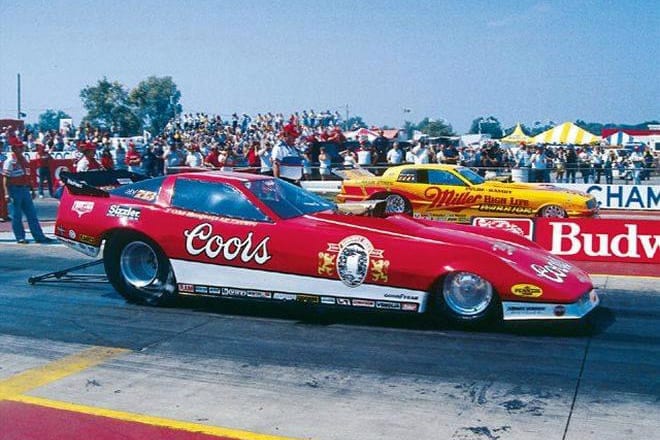 As a Chevy guy, Ralph says he became a bigger “Mongoose” fan when McEwen switched to Corvette-bodied Funny Cars in the late-’70s, like his legendary silver English Leather-sponsored ride. By the mid-’80s, that car had been traded for a new C4 Corvette-style body and McEwen’s primary sponsor was Coors, thus the bright red finish on this beauty.


The Coors Corvette ran in the NHRA, IHRA, and AHRA, and it’s what McEwen drove to win the 1984 IHRA Winter Nationals, the ’84 AHRA Finals, and the prestigious Big Bud Shootout that same year. He ran the car for two more seasons, retiring it at the end of 1986 in preparation for his ’57 Chevy-bodied car introduced in 1987 and sponsored by Danchuk, the classic Chevy parts company based in Santa Ana, California. In fact, Danchuk headquarters is exactly where the Coors ’Vette landed when it was retired. “It’s literally been sitting there since they pushed it out of the transporter in the late-’80s, which is pretty cool,” Ralph says. “This thing was so lucky – it got pushed into a dry building in California.”

That’s where it resided for more than three decades. Unlike many race cars that undergo painstaking restorations, this one is a survivor – one that had the good fortune of being stored in a facility where it was well-preserved. You might be wondering how Ralph, who now lives in Indiana, came to own this incredible piece of drag racing history. A second-generation hot rodder and enthusiast, Ralph has had some pretty cool cars pass through his collection, including a couple of Troy Trepanier’s early efforts and the classic “Tom & Jerry” Funny Car. “You buy a Funny Car because everybody needs one of those,” Ralph laughs. “They’re just so cool looking when they’re in the garage.”

As you might expect, Ralph has some pretty good connections in the hot rod world and just happened to be speaking to one of them earlier this year when he learned that Danchuk wanted to sell the Mongoose Coors Corvette. It was one of those out-of-the-blue, right place-right time things that Ralph is still pinching himself about. “The whole thing went down in about two weeks,” he says.

In fact, in part due to COVID, he sealed the deal and had the car shipped to Indiana without actually seeing it in person – just watching a FaceTime walk-around on his phone. He wasn’t disappointed when it arrived. “When they unloaded it…you could see how nice it is,” Ralph says. “I’m overwhelmed by how cool it is.”

Beyond having all of the original equipment it raced with, Ralph marvels at details of the era like hand-painted sponsor logos (this was way before vinyl wraps) and the cool machined “Mongoo$e” valve covers. Ralph is excited that renowned motorsports artist Kenny Youngblood did the lettering on the car, and he’s in awe that his hero Tom “Mongoose” McEwen was once strapped in the cockpit. “He touched this steering wheel, and grabbed that brake,” Ralph says. Ralph says he’s surprised by the number of people who have contacted him after learning he had the car – including many collectors who’d been looking for it and never knew where it was. “Everybody comes out of the woodwork with information,” he says. “I’m starting to get some cool memorabilia to kind of tag on the wall around the car.”

Unlike the past three decades, Ralph hopes to get the car out so others can enjoy it and reminisce, too. “I think that’s what you’re supposed to do,” he says. “To me, these cars need to be seen.” He thinks it would be cool to take it to the NHRA U.S. Nationals in Indy, “so the next generation of kids can look at it.

“I’m a very nostalgic guy,” Ralph continues. “I can be the caretaker and leave it alone and make sure it gets kept safe. I’m not making history, but I can help keep it for the next generation.”