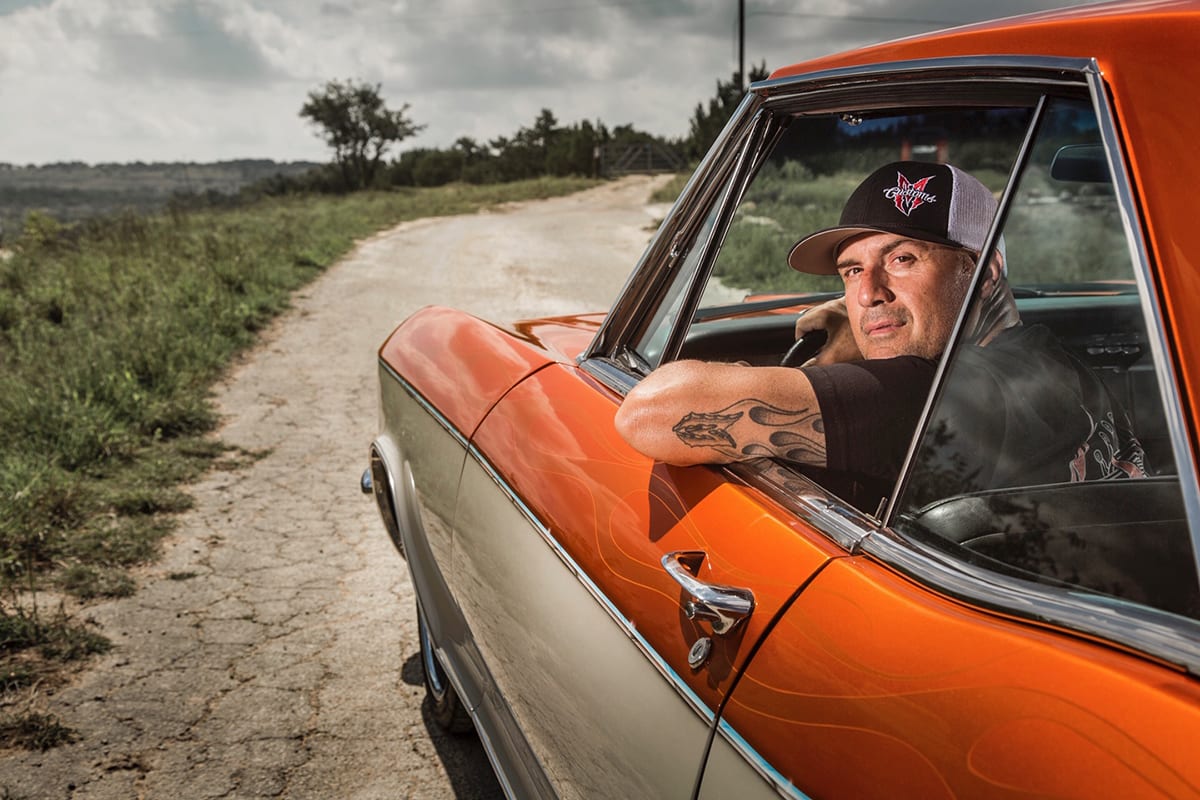 Joe Martin is not your typical automotive reality TV star. He hates drama, doesn’t have a lot of fighting going on in his Texas-based hot rod shop, and would rather be elbow-deep under the hood of a car than mug for the camera. Still, though, Joe and his crew at Martin Bros. Customs have managed to make their show, Iron Resurrection one of the top-rated programs on the Motor Trend channel (formerly Velocity).

“What you see is what you get on our show,” Martin said. “There aren’t a lot of antics on it. We refuse to do that. Our viewers like the educational side of things. We’re not actors. We think that added drama is ridiculous, and we refuse to do any of that on our show.”

Martin, who stars on “Iron Resurrection” alongside his wife Amanda, his best friend Jayson “Shag” Arrington and the rest of his shop crew, has been building and restoring cars and motorcycles since he was in high school. He originally started working on cars, but jumped into the motorcycle craze of the 1990s, making his first reality TV appearance on Discovery’s “Biker Build Off.” Eventually, the bike craze died down, but Martin’s passion for crafting vehicles didn’t, so he turned back to building classic cars.

We chatted with Martin about how he resurrected his shop, what it’s like to be ‘famous,’ and if we’ll see him on another season of “Iron Resurrection.” Goodguys Gazette: How did you go from a regular hot rod builder to reality TV star?

Joe Martin: I had done “Biker Build Off” years before, and those producers approached us because they needed automotive content for the Velocity channel. We made a teaser reel and presented it to them and it stuck! They liked it, and now my brother is actually one of the producers on the show. We’re three seasons into the show and it’s been really good for us. The TV schedule is tough but it’s the best advertising we could ever ask for!

GG: You work with your wife, brother and friends. Is it hard to separate family from work?

Joe: The work/life balance can be tricky. My brother works on the production side now. He’s out getting location releases signed and things like that. My wife does all the financials so she’s in the office the whole time, so we don’t see a lot of each other. We all have our roles, which luckily keeps us from working on top of one another and getting on each other’s nerves. We are so busy we honestly don’t have time to fight!

GG: You see a lot of fighting and drama on other automotive-themed reality TV shows, but not really on “Iron Resurrection.” Why is that?

Joe: Just like any shop, we have our guys playing jokes on each other and stuff like that, and a lot of that makes it onto the show. We don’t need any of that dramatic crap. We want our show to be educational and funny, and make the average guy want to go out and learn more about cars. I feel like the viewers can definitely tell when the drama is staged. Viewers are not stupid, and sometimes we have to remind our producers of that. We are the viewers of these shows, and we know what those people want to see.

GG: Do you ever regret your decision to do a TV show? Joe: When we’re in the middle of the season, and we’re crazy busy, we always think, ‘What did we get ourselves into!?’ The schedules can be tough. A lot of times you start to second-guess your decision to do a show because of the long hours. We don’t want to sacrifice the quality [of the build] just to get a car done for the TV show. We’ve learned to put our foot down and not rush things, regardless of what the production team says.

But honestly, no, we feel so grateful to have the show. It’s been priceless to us. Being featured on TV automatically puts hundreds of thousands of eyes on our shop and our work. It’s given us the opportunity to work with great customers on amazing cars, and set us up to be busy for years to come.

GG: Do you get recognized when you go out these days?

Joe: It’s really strange to go to a car show, or SEMA now. That’s really where we get recognized. We walk through and people stop us every 15 or 20 feet. It’s really bizarre. It’s strange to me because we’re so normal, and there are people who do the same thing we do but don’t have a TV show. There are so many talented people who aren’t on TV, so sometimes I feel like, ‘Why do I deserve a show?’ It’s very humbling!

GG: When your bike shop closed during the Great Recession, you reinvented yourself and opened a custom shop. What advice do you have for shop owners who are struggling?

Joe: The most important thing is to get customers to believe in you. To do that, they have to see something from you. You may have to sacrifice and build one of your cars to the best you can afford and then take it to events, just to get your name out there. Go around at shows and look at what other builders are doing and set a standard for yourself. My advice is to use your imagination and maybe pick an oddball car to build. Take a chance and do something different so that you stand out in the crowd and are remembered. It’s a tricky road but if you have a genuine love for cars, it’s not going to feel like work.

GG: What’s your favorite car that was featured on “Iron Resurrection?”

Joe: One of my favorites was a ’67 Nova. It was a car I always wanted all of my life but never really ran across the right one. That car was traded to us by a customer. We shot the whole thing and I ended up with the Nova. Another favorite is probably the ’50 Merc we did. We chopped it and it ended up being a rust bucket, so we got to hand-make everything which was kind of cool. We were really proud of that car.

We live vicariously through all these cars. They’re all different and you learn something from each one. Some projects aren’t as well-financed as others so you have to use your imagination to make it stand out. You can’t always just throw a bunch of money at it. I think that’s why people relate to the cars we do on our show. Joe: I like so many kinds of music, but on a long trip, I like to listen to something like Lynyrd Skynyrd’s ‘Whiskey Rock-A-Roller.’ That’s a great traveling song.

GG: Will there be another season of “Iron Resurrection?”

Joe: We are signed up for Season Four. We signed a five-year deal so, after that [runs out] we’ll decide if we want to do another couple of years or whatever. Fortunately, the show is very well-rated and everyone seems to enjoy it. [Motor Trend] is doing a lot of digital, online content too. That’s good for us because it keeps us relevant with viewers between seasons.

GG: Outside of the reality show, what’s next for you and your shop?

Joe: We’ve got some cool cars lined up that we’re really excited about. They may not be on the show, but we’ve got some great customers stepping up to do neat projects. Eventually, I hope that we get to the point where we don’t have 25 cars in the shop at a time. I’d like to do three or four high-end cars a year that we can really take our time on. We just want to keep doing the best we can do, and stay in the business as long as we can, because this is what we love to do.