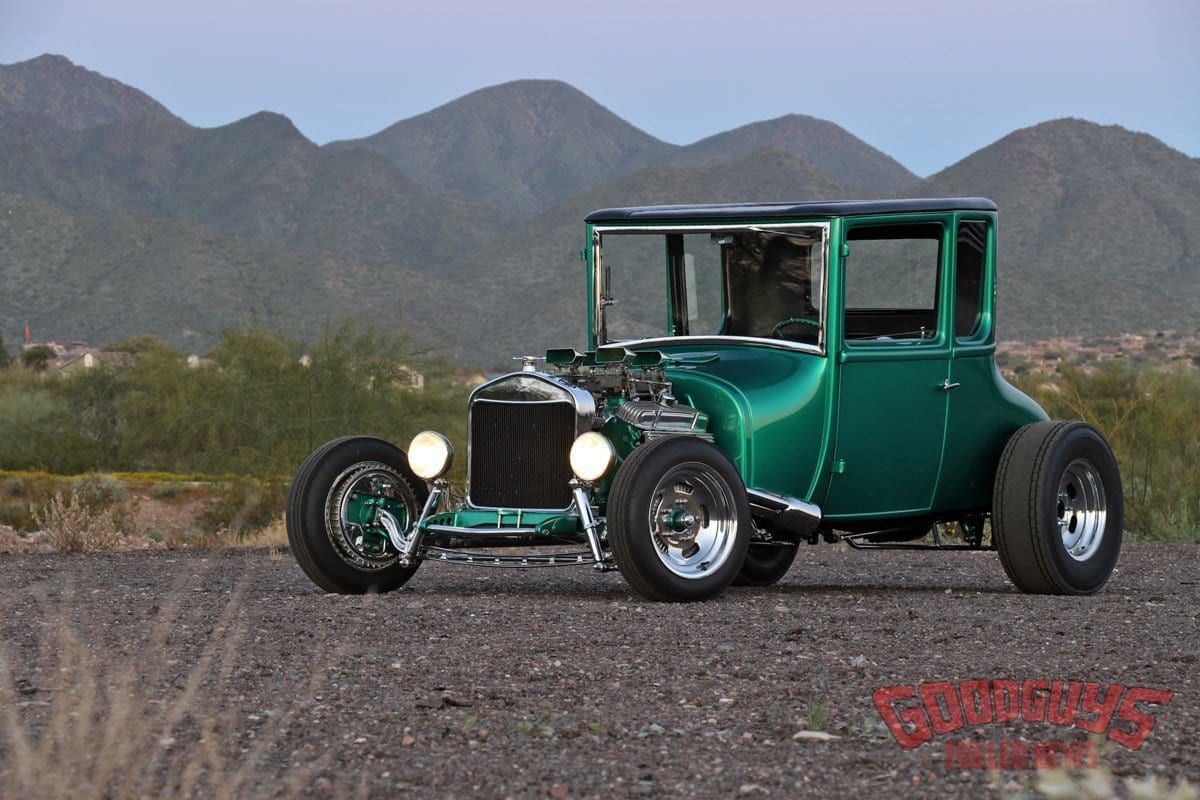 In the 1960s, early Fords were still abundant. While the ’29s and ’32s have been elevated as more popular choices, anything Henry Ford built was hopped up and showcased in the earlier rodding days. Admiring that style, the Haifley brothers, Doug and Kelly, have cultivated a Phoenix-based shop that specializes in early hot rods and choppers. The Haifley Brothers have developed quite a little following. They are also avid swap meet junkies and sourced many parts for this coupe from them.

While the build of this ’26 T coupe is relatively new, the chassis was actually the first frame young Kelly built in the brothers’ backyard. He was just 23-years-old at the time, though he was well into his 30’s when this car came together. The frame had been filled and smoothed and then painted (along with the juice brake components) with free DuPont paint found during a clean-up job on a construction site Kelly was working. Kelly originally built the chassis for a T sedan, but the project sat dormant for many years as life rolled on and their business grew. Eventually the sedan body was removed, and the bare chassis slumbered for a few more years in a corner of their shop.

The Haifley brothers’ dad became interested in hot rods as a result of their activity and purchased this un-chopped ’26 T-coupe body from the Midwest, after getting a guy’s number at a swap meet. He began building himself a hot rod in his spare time. He roughed it out over a running chassis, but eventually decided to sell the running gear to somebody else, and Doug scooped up the body for their green frame. Doug wanted to stick with a ‘60s style like those cars in his old magazines, and he collected parts as he went, mostly from the aforementioned swap meets. The chassis was set up on a ’57 Ford 9-inch rear from a swap meet with a transverse leaf spring and a set of homemade ladder bars.


The Haifley brothers drop their own front axles the old-fashioned way, with heat and a huge hydraulic press, and they dropped this 1936-vintage beam themselves. They also slotted the center of the I-beam very liberally, competition style, instead of the more common hole-drilling. Doug says it may look questionable, but it’s held up so far. Split ’36 wishbones were used, along with a reversed Corvair box and ’40 Ford juice brakes with real finned Buick brake drums. In true ’60s fashion, they’ve kept the chrome platers busy. The slotted steel Keystone wheels were about $29.99 when new, and in every magazine ad and department store of the era. Due to their less-than-stellar chrome plating, they are very hard to find these days. Diligent swap meet hunting turned up the wider set for the rear, while the narrow fronts came drilled for a four-lug Volkswagen pattern. The brothers simply welded up the VW holes and re-drilled them. They were sent out for chrome plating and wrapped in BFG Silvertown bias-plies. The cool re-capped cheater slicks were special ordered from Towel City and are more mid-’60s proper than a pie-crust sidewall. The brothers are huge Pontiac fans and stuffed the rails with a 400c.i. Poncho pulled from a local guy’s ’72 Lemans. To keep things cool, Doug used an adapter from Butler Performance that lets him run a Chevy water pump. He also went with a chromed Mopar alternator. A quartet of Rochester two-barrel carbs are fed through Cal Custom Badger scoops. They sit on an early ’58-’62 Edelbrock 6×2 intake that was modified to fit the 400. Two wooden bucks were carved and sand-cast by a friend to cap the center carb openings. They not only reduce the fuel quantity, but also feature pedestals that support the linkage assembly. The valve covers are early Weiand pieces and Doug modified a set of finned aluminum Buick Nailhead spark plug covers to tidy up that area. Close attention was paid to the handmade headers. They feature early-style square flanges, sweeping competition-style pipes, and a large bell collector. Each collector is fitted with a baffle flange that holds a shorty Cherry Bomb muffler gut. The potent Pontiac is backed with a TH350 trans and cooled with a chromed T radiator. The headlights on either side are attached old-school to a pair of Ford F1 shock mounts. 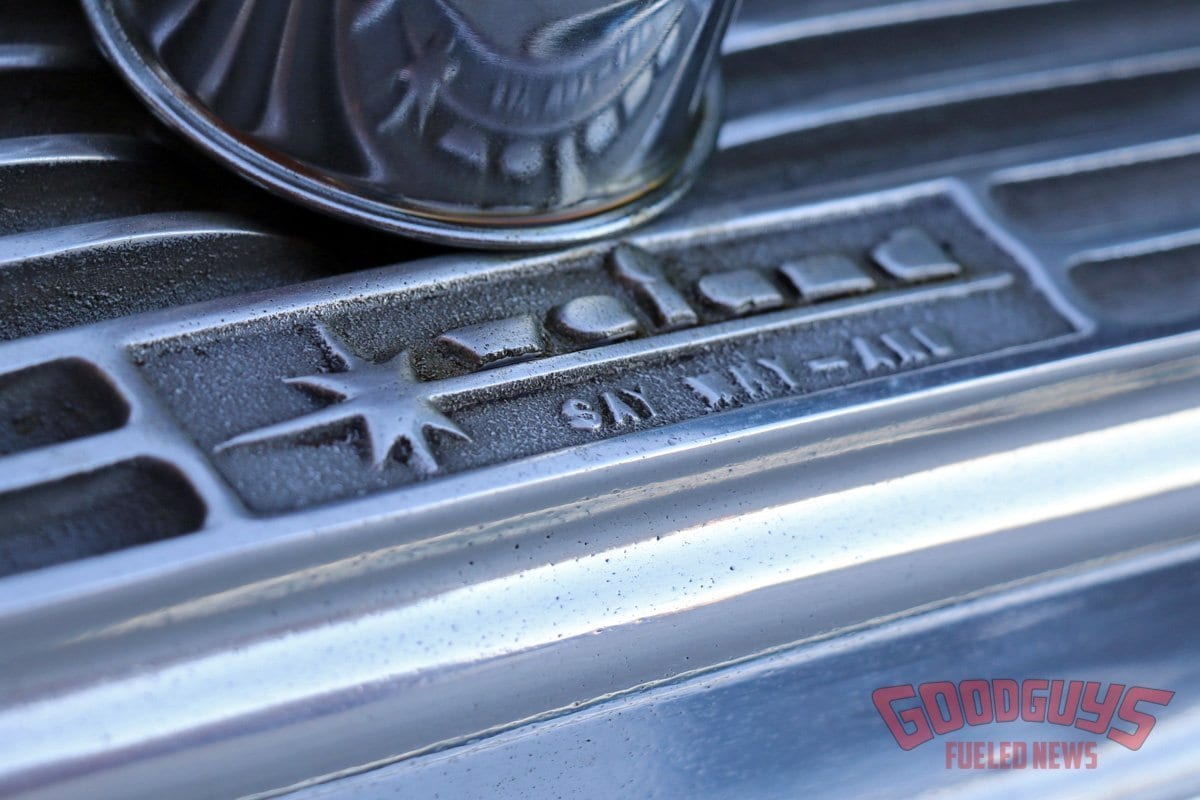 The coupe body was left un-chopped, but keen eyes will notice the lack of a visor. Doug stretched the windshield and frame up another three inches to eliminate it. This makes it and the side windows the same height. The swing-out mechanism still functions, as does the cowl vent, which houses the brake master cylinder. The padded top was stitched in-house for the plywood roof. A rare NOS Hollywood license plate light was added to the rear of the body, along with a custom tube bumper and ’48 Ford taillights. The vintage paint on the chassis and engine was a close match to House of Kolor’s Amazon Green and the body was prepped and sprayed to tie things together.

Inside, a 1936 Ford dashboard was welded to the T rail to pick up the stock mounting bolts. It was filled with a swap meet collection of early Stewart Warner gauges and topped with a vintage green metalflake Moon wheel. Another vintage part, a Hurst shifter, was set in a fabricated housing in the floor. The black vinyl on the seat and door panels was given the biscuit pattern that matches the top insert, again, sewn in-house. The Haifleys have taught themselves how to sew and are known for their chopper seats. When the car was finished, it was taken for a short test drive, where it was determined the transmission was missing a gear or two. It was swapped out that night, and the next morning they loaded up and drove the T from Phoenix to the Grand National Roadster Show in California with no further problems. The brothers recently made the trek back to California to attend The Race of Gentlemen and the green coupe continues to be frequently driven. The un-chopped top and bigger cowl of the ’26-’27 body make this one a very comfortable road cruiser and the power-to-weight ratio makes it pretty peppy. A clean ‘60s style and road trip dependability will always be a winning combination in our book, and the Haifley Brothers nailed it.