“Back in the day, I did a lot of sand drags and Jeeping,” is how Jim Martin answered when queried about his ’78 J10 Jeep. It’s amazing how many hot rod stories start with, “back in the day,” though it makes sense when you set about searching for a project to build with your teenage son. Jim was familiar with Jeeps from his days beating them on the dirt strips and through the desert. And as a classic dirt bike restorationist, a Jeep pickup made perfect sense. Jim stumbled upon this rare Golden Eagle model on an eBay listing in eastern Oregon. The ad showed the J10 Jeep as a low-mile farm truck that hadn’t run in years, but was loaded with options including a 401, air conditioning, full-time Quadra-Trac four-wheel drive, and to top it off it was a Levi edition. That’s right, the jeans manufacturer had two interior options for Jeeps in the late-’70s; a denim version in blue and a tan version in corduroy complete with Levi buttons on the door panels and seat inserts. 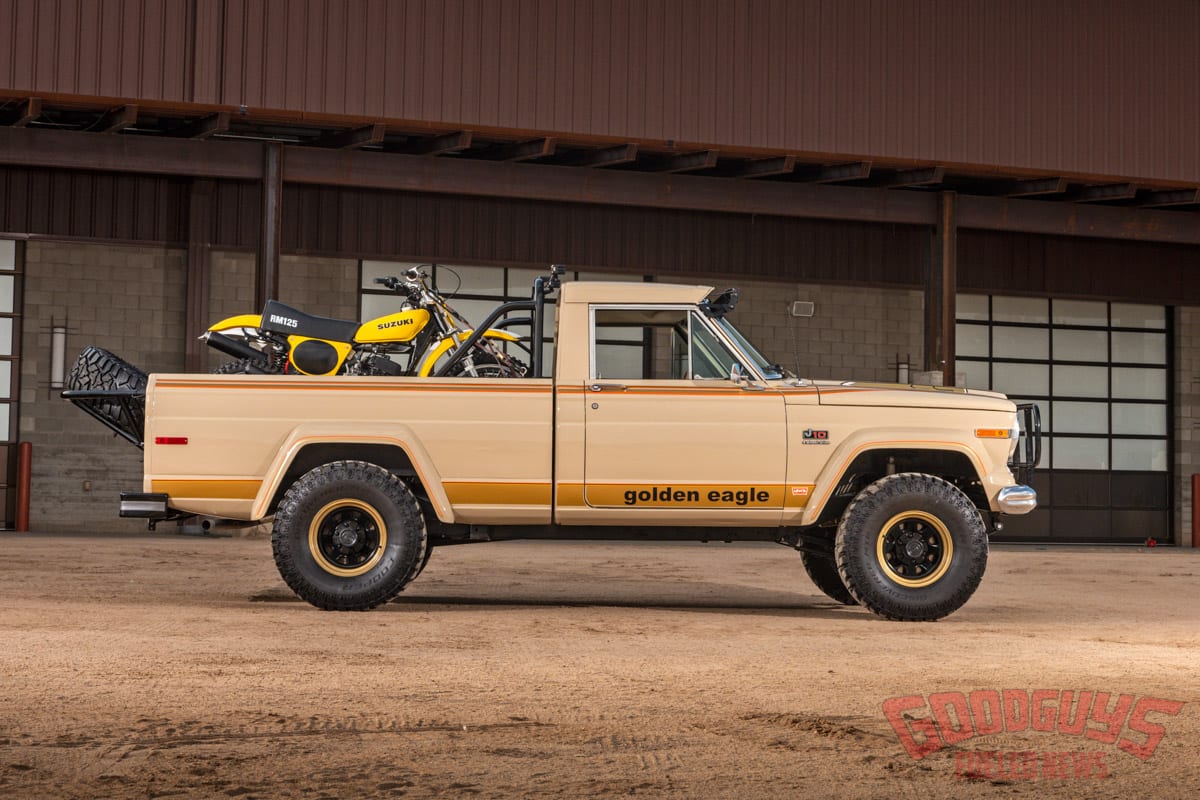 Why the low miles? Like so many farm tools, if they have a major mechanical failure, they’re generally pushed aside until the issue can be repaired, which a lot of the time is never. It seems that the 401 lost a cam bearing right around 30,000 ticks and the once proud, hard-working Golden Eagle was left outside until there was time for a repair. Of course, that day never came until Jim won the auction for the forlorn Eagle. “It had low miles, but it was beat,” Jim explained. “It was truly a farmer’s work rig since it was new, but it was in east Oregon, which is dry, so it was rust free.”


Once the J10 made it to Phoenix, Jim and his son William tore into the rig. The wounded 401 was placed in the capable hands of AZ AMC Restorations for a complete rebuild that included a set of Edelbrock aluminum heads, an Air Gap intake and coated headers from Hedman. The body was never lifted from its original chassis, but the father-and-son team did add a Rancho Suspension 3-inch lift kit. With a little height added, there was now room for meatier 33-inch MTP Cooper tread on the original Golden Eagle 15-inch wheels. The factory sheet metal was smoothed and brought back to life with the factory color and Golden Eagle decals were applied, which of course includes the soaring hood eagle. Modern LEDs, a brush guard, and a custom tiregate are the only real updates. The interior received a similar treatment in blending the original with subtle updates. Dickerson Upholstery surrounded the corduroy inserts (and Levi buttons) with leather and the factory gauges were freshened with modern electronics by Dakota Digital. The J10 Jeep build took Jim and William about four years to complete and when they rolled it into our fall Scottsdale show, loaded with an original ’75 RM125 Suzuki and CR250 Honda, our Fuel Curve team was blown away and quickly named it their pick of the show. The execution of blending stock with a touch of modern in a uniquely optioned J10 is just spot on. Now, let’s roll that rig out to the desert for an afternoon of fun in the sand!