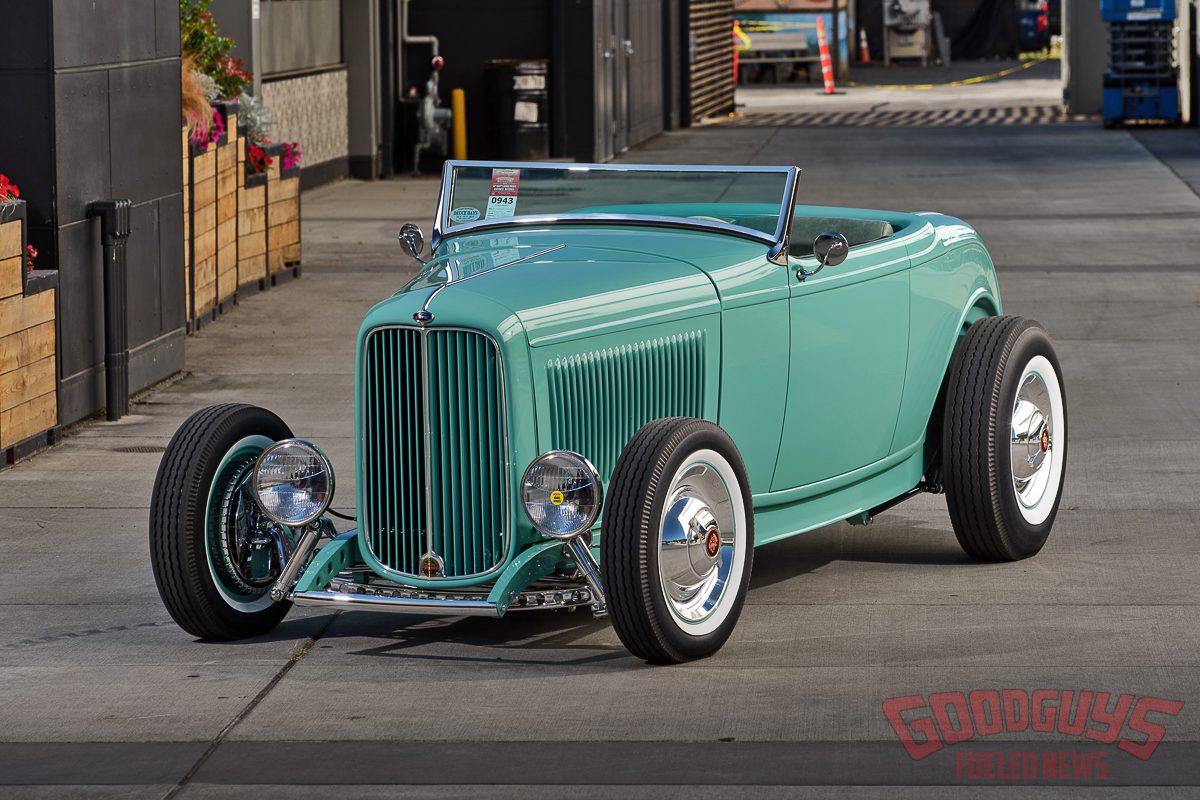 In his many decades as a hot rodder, shop owner, and car builder, Don Richardson has had his share of cool cars and trucks. You might recall his rare ’38 Ford convertible sedan, which was a Goodguys America’s Most Beautiful Street Rod finalist a few years back. And you’ve probably seen his ’39 Ford panel truck in photos from Northwest events in more recent years.

Like many enthusiasts, Don has a list of “someday” cars, and one that had eluded him was the quintessential hot rod, a ’32 Ford roadster. Finding an original Henry steel example is the goal for many rodders, but Don actually sought something even more rare: a Dearborn Deuce. Built for many years by a company of the same name, the Dearborn Deuce was a reproduction steel roadster with a twist. Its soft top folded down into a compartment behind the cockpit, concealed by pop-up body panel. It also had roll-up side windows, offering more sound and weather protection for long-distance driving. Yes, purists will note that the roll-up windows dismiss a Dearborn Deuce from the “true roadster” category, but with a bolt-on windshield and fold-down top, it’s close enough for many rodders, with the comfort and practicality out- weighing any perceived lack of purity.


Don and his wife Irene saw the Dearborn Deuce display at the Grand National Roadster Show when the cars first came out and were impressed with the concept. Don believes the company ended up building less than 400, making them scarcer than original Henry roadsters. So, when a friend of Don’s found an unbuilt example for sale online on the East Coast, Don jumped at the chance to buy it. The car had been stored in bare metal for years, leaving it with a coat of surface rust that spooked the previous owner. Don wasn’t fazed. Once the body-and-chassis package was rolled into his Washington shop, Richardson’s Custom Auto Body, some cleanup work with metal prep solution had it ready to work on in short order. Don set himself a goal of having the car built in time for the 2022 Northwest Deuce Days event in Canada, which was about 14 months away. It was an ambitious schedule considering the car was a nights-and-weekends project separate from customer work. “It was quite a push to get the car done in the timeframe I wanted,” Don says.

The car came with a TCI chassis, which Don updated with an Anson 5-inch dropped and drilled axle and wishbone-style radius rods from Johnson’s Hot Rod Shop. A four-bar rear suspension with RideTech coil-overs locates the 9-inch rearend, while So-Cal disc-in-a-drum front brakes help bring things to a stop. A defining element on any hot rod is the wheel-and-tire package, and the rollers on this Deuce truly set it apart. Don worked with Zac Zamudio at Pyramid Optimized Design to create 16×3.5- and 16×6-inch billet aluminum wheels machined to resemble Cadillac Sombrero hubcaps. Screw-on center caps hide the lug nuts, while the wheel edges are painted body color to look like steel wheels. The 5.50-16 and 7.50-16 whitewall tires are from Diamondback Classic. The neo-retro theme continues with the LS Classic engine, an LS3 crate engine dressed to look like a vintage Corvette fuel-injected small block. Outfitted with Sanderson headers, a Holley ECU, and a Walker radiator, the engine provides modern efficiency and power with the help of a 4L65E transmission. The appearance is even more distinctive thanks to a custom air cleaner designed by Pyramid and 3D printed from aluminum. Starting with relatively fresh sheet metal certainly gave Don an advantage with the body, but he still spent many hours tightening the gaps, fitting a Rootlieb hood, and building a custom curved fuel tank reveal to better match the body lines. A Pines Winterfront grille adds a little more distinction, as does the color – a seafoam green hue that looks like it could date back to the ’40s or ’50s, but actually came from an old PPG fleet col- or book. Large ’33 commercial headlights and ’50 Pontiac taillights help capture the classic hot rod look. Pairing the seafoam paint color with distressed green leather upholstery was a bold choice, but the trim work by Charlie Rowell at Holcomb Upholstery works perfectly with the overall appearance of the car. The material covers a Wise Guys seat and custom door, side, and trunk panels. The dash is fitted with an Auburn Classic panel filled with Classic Instruments gauges, while a column-shift Ididit tilt column provides a great mounting point for the beautiful Crestliner wheel from Limeworks. Vintage Air helps keep things cool or warm, depending on the outside weather. Keeping an eye on his deadline, Don worked right up until the time he had to depart for Deuce Days in Victoria, British Columbia. “I probably had 20 miles on it,” he says. “I drove it over to Port Angeles, put it on the ferry, and then drove it on the Poker Run.”

A week later Don brought it to Puyallup, where the car immediately caught our attention. Since then, it has seen local miles around events, even getting rained on at the Colorado Nationals. “I’ve driven the car in the rain, and it doesn’t leak,” Don says. “They designed that car really well.” While it will get pampered a little until it’s shown at the 2023 Grand National Roadster Show, Don says the long-term goal is many more road miles. That was the primary appeal of the Dearborn Deuce – to have a car with a fold-up top, roll-up windows, and climate control for more comfortable road trips. As a painter, Don isn’t obsessed with keeping the finish perfect – he knows it can always be touched up if necessary.