There’s certainly no shortage of automotive-themed reality TV shows these days, thanks in good part to Jesse James.

James – whose life and career as a motorcycle and custom car builder was first documented in the Discovery Channel documentary “Motorcycle Mania” before he became the star of the channel’s “Monster Garage” – was a bona fide reality TV star before there even was such a thing as “reality TV.”

“There was nothing like that on TV back then,” James said. “[The documentary] was in 2000, when the only other reality show was ‘Survivor.’ I had nothing to gauge it on. When I started on ‘Monster Garage’ [in 2002], it was the first time they had chronicled someone’s business and life, no holds barred.”

James starred on several other reality shows after “Monster Garage” but says he has no interest in returning to the world of reality TV. These days, he’s content to be building cool cars and bikes at his West Coast Choppers shop near Austin, Texas, while also working on his Jesse James Firearms Unlimited brand of custom guns.

We spoke to James about his early years as a builder working under Boyd Coddington, his craziest followers, and the only reality TV show he likes to watch.

GG: If you hadn’t become a car and motorcycle builder, what kind of career do you think you would have pursued? Jesse: I don’t even know what I’d be doing. I have been into cars since before I even got my license because my dad was in the car scene in the ’50s, so it was an easy thing for me to get into. I always wanted to play football, but I think I would have probably ended up doing something with my hands, for sure.

GG: In the beginning of your career, you worked for Boyd Coddington at his shop. What did that experience teach you?

Jesse: I was building some cool bikes and had already been on some magazine covers, so I really thought I was going to go in there and show Boyd what’s up! (laughs) I went in there and realized I was run-of-the-mill. I really learned how to push the boundaries of cleanliness from Boyd. He had this incredible eye for lines, hardware, texture and colors. Working there was the best experience I could ever imagine; to be 24 years old and working at the best hot rod shop ever! I still look back, almost 25 years later, and see some of the stuff we did there, and think it’s just awesome. I made lifelong friends there who I still rely on to this day.

GG: All these years later, do you still get excited to walk into your shop every day? Jesse: Definitely. I get up at 5a.m. and can’t wait to get in the shop. I usually stop working when I am bumping into things and starting to get delirious. I can’t get enough of what I’m working on, whether it’s building cars, bikes or guns. I love the challenge.

GG: You were basically the custom industry’s first reality TV star. Do you watch any of the car-themed reality shows that are on now?

Jesse: I think reality TV has morphed into this crappy, horrible genre. I think it does more of a disservice to the auto industry, honestly. When I came around, they were trying to put the cream of the crop, the best of the best, on shows. Now you just have to be a loudmouth who really wants to be on TV to get a show. It’s just unwatchable most of the time. I want to learn stuff. I think the networks consider car people to be stupid, so they really dumb-down the car shows. The only one I’ll watch is [‘Counting Cars’], the show about Count’s Kustoms. They’re not building over-the-top spaceships there; they’re just making cool custom cars and trying to make their customers happy.

GG: What do you think is the biggest misconception people have about you?

Jesse: I think the people who have the strongest opinions about me have never met or talked to me. They judge me by my TV soundbites and think I’m some monster or something. I couldn’t be farther from that, honestly. I probably don’t do a good job of defending myself because I don’t care what people think.

GG: Do you ever get a chance to go to any car shows? Jesse: Not really. That’s one of the downfalls of being on TV – all the normal stuff I used to do is harder to do now. It bums me out that I can’t really just walk around a car show and look at cars. I went to the car show in Paso Robles with my son and some guy started trying to fight me. I wanted to just look at cars and spend time with my kid. Some people respect that, but some people don’t and get really mad if I won’t take a picture with them or something.

GG: These days you work on cars, motorcycles, knives and guns. If you could only pick one thing to build, what would it be?

Jesse: Motorcycles…and guns! I can’t pick! Motorcycles are my calling, and I’ve been doing it for so long. I started West Coast Choppers 30 years ago and it was my vision. But guns seem to be what I’m supposed to be doing. They have a deeper meaning than cars and motorcycles. I don’t care how cool a bike or car is, those are the first things a person will sell when they need money. It’s not like that with guns. The only time I’ve seen guns go up for sale is if someone is going to prison and has to sell off their collection. I love the importance of guns. GG: You’ve been in the public eye for a long time. Do you have any crazy fan stories?

Jesse: I hate the word ‘fan’ because I’m not a rockstar or anything; I’m just a welder. I’ve been pretty lucky, though. Sometimes people get crazy on the Internet, and I’ve had people want to fight me…and then they meet me and realize I’m 6’3’ and 225 lbs. and it’s not a good idea. I’ve had a few crazy followers. I’ve had people make voodoo dolls with their hair. I had someone try to run me over with their car in front of my house. We had one woman who was arrested six times trying to jump over the gate at the shop. She was this professional lady with a rich doctor husband, so it was really weird.

GG: The Roadster Shop is currently working on your radical ’64 Dodge Polara. Why did you want that car?

Jesse: I’ve never seen one done in the modern style with different power. Every single one of them I’ve seen is red or white, with American Torq Thurst wheels and that’s it. So, I wanted to do one. I love the body style. I collected parts for this car for 10 years before we finally found a donor car. Jeremy [Gerber] is jamming on it now so hopefully it will come to a few Goodguys shows next year. 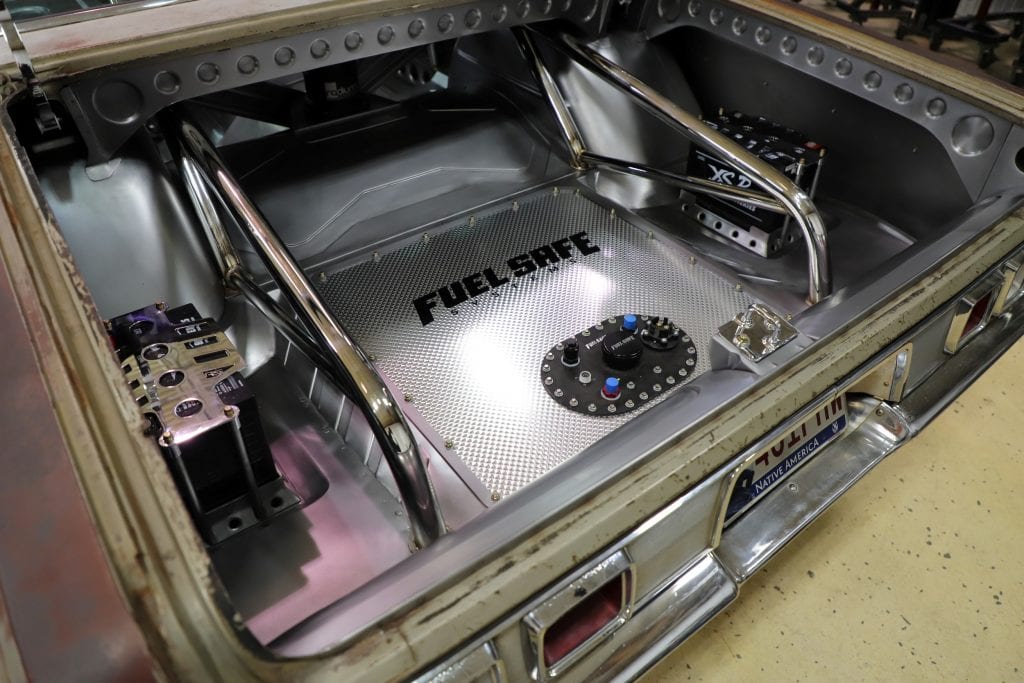 Jesse: We’re finishing a ’49 Merc that was built at Barris but never finished. That’s being done in Nashville right now. We have a few cool bikes that we want to take to the Goodguys shows. I’m over the motorcycle shows. I think the Goodguys shows are a better market for us, honestly. I think they’re a better venue for us to sell our stuff. We have a lot of cool stuff to bring. 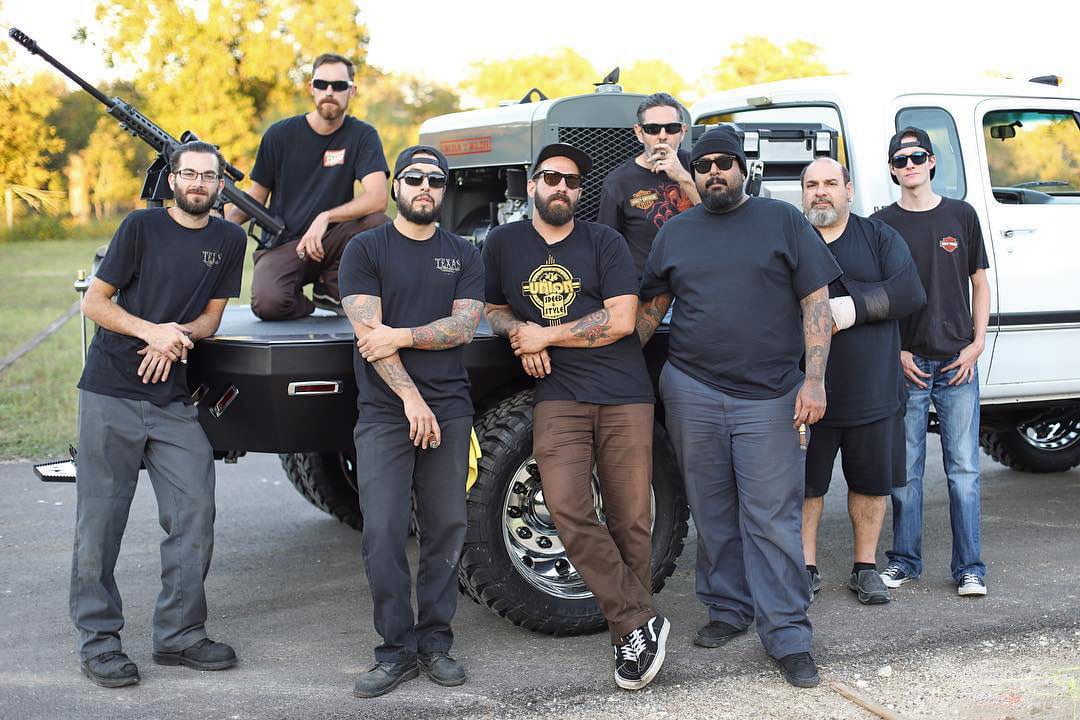