The California Kid – Movie of the Week, Car of a Generation

Since the Legends column began alternating between famous hot rodders and famous hot rods, we have showcased the ZZ Top Eliminator Coupe and Norm Grabowski’s “Kookie” T, both lifted to prominence by the mainstream media. Thus, they were feted not only by car guys but by the general public. They became part of popular culture.

This month’s legendary hot rod followed a similar path to fame. The iconic black-and-flamed, chopped ’34 Ford three-window coupe, known as the California Kid, was built by car crafter extraordinaire Peter Chapouris. As luck would have it, the Kid earned national celebrity by starring in a 1974 ABC Movie of Week, “The California Kid,” which featured a leather-jacketed and pompadoured Martin Sheen as the outlaw interloper who rumbled into town with a worrisome hot rod.

But the car’s history is more nuanced than a turn on film. It involves a forsaken T-bucket, a friend’s concurrent ’34 coupe, and arguably the most famous street rod magazine cover of the 1970s.

The late Pete Chapouris was obsessed with cars his entire life, especially rods and customs. In the early 1970s Chapouris owned a T-bucket, inspired by the ’buckets of Grabowski and Tommy Ivo. But he wanted a “real” car, one that would harken back to hot rodding’s formative decade, the 1950s. 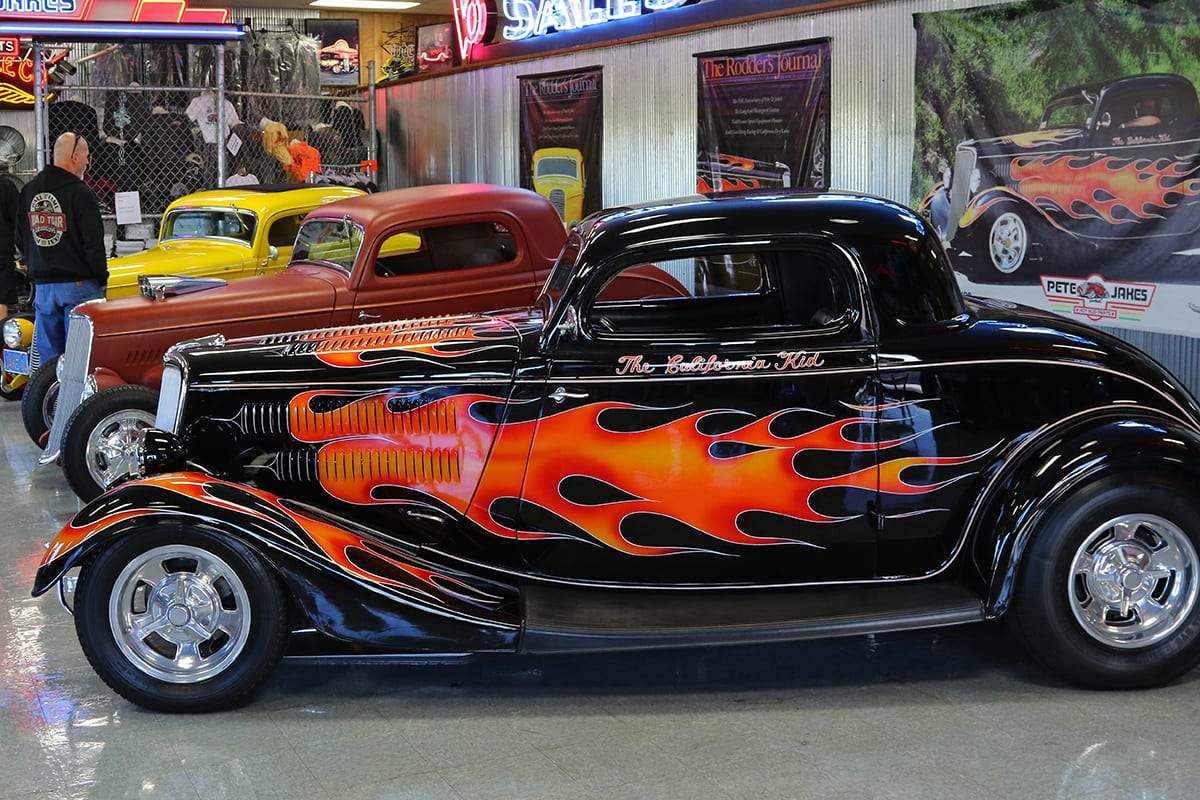 A friend of Chapouris, local drag racer and rodder Randy Troxel, tipped Pete off about a full-fendered ’34 three-window stashed in a nearby garage. After a few days of haggling, Chapouris owned the coupe; he hauled it home on New Year’s Day 1972. Pete promptly sold the T-bucket, but not before purloining the powertrain for the coupe. Coincidentally, a few months later he turned passion into profession when he caught on at the famed Blair’s Speed Shop in Pasadena.

Enter journalist Gray Baskerville, a feature writer at Rod & Custom who came to visit the ’34 project, bringing along fellow R&C staffer Jim “Jake” Jacobs. Jacobs was a prominent old-school hot rod builder who had spent time working with Ed Roth before joining Rod & Custom. Jake was working on a ’34 coupe of his own, a bright yellow fenderless version.

As luck would have it, R&C was planning an issue on the art of top chopping. Jake’s ’34 was completed a couple months after the Chapouris coupe, so publisher Tom Medley and editor Bud Bryan decided to pair the two on the cover.

The cover image featured the coupes in front of a weathered barn, with chickens and goats roaming in the foreground and a winsome model wearing a puzzled expression. The top blurb shouted, “Chopped Top Issue.” Another blurb asked, “Are Coupes for Chickens?” And Stroker McGurk came off a sketchpad to “chop” the Rod & Custom masthead (to the dismay of Petersen Publishing brass).

The cover was a newsstand success and changed the careers of Chapouris and Jacobs. It also positioned the black coupe for ride toward immortality by catching the attention of movie producer Howie Horowitz, who was searching for a car to play a key role in a Martin Sheen flick. With only four days before shooting, Horowitz saw the R&C cover. He immediately called Pete. The next morning Pete and Jake headed out to Universal Studios. By day’s end, “The California Kid” had earned a starring role.

A recent chat with Jim Jacobs revealed interesting tidbits about the filming experience. “The producers told us up front,” Jacobs recalled, “that if we care about the car, you’ll be on the set every day of filming. I had to babysit the car and protect it from the film crew. To prove the point, the one day I missed, they bent a rim, blew out a tire, and ruined a running board!”

Jacobs also revealed a couple movie-making nuggets. The coupe’s Ford V8 was mated to an automatic, but the rumbling sound you hear on screen is actually from a big-block Corvette with a four speed.

The film execs also wanted a really “hot” car, and the coupe didn’t always meet their expectation. In one scene, Sheen is pulled over by a cop, who asks to see the engine. Sheen throws open the hood. The camera zooms into the engine — and reveals not the 302, but the four-carb Chevy engine from the famous yellow “American Graffiti” coupe. Creative license?

“The movie showed off a traditional hot rod to a nationwide audience,” Jake said, “and showing it perform drew interest in hot rodding. But more than that, the two cars together and the Rod & Custom cover helped build enthusiasm for street rods and the growing aftermarket, of which Chapouris and I were soon members: we launched Pete & Jake’s Hot Rod Parts, and we even got permission from Universal to use the image of the California Kid in our logo.”