Nearly every town and neighborhood back in the day seemed to have one car that all the local gearheads knew and admired. Harris Kern’s straight-axle ’69 Chevelle was one such car in South San Francisco in the mid-1970s. Featured on the cover of the July 1975 issue of Hot Rod magazine – towing a matching big-block-powered Sanger boat! – the Chevelle was a shining example of the Street Freak era. It had a jacked-up stance with Cragar S/S wheels, straight-axle front suspension, and a chrome-plated 12-bolt rearend. It had 396 cubic inches of big-block power. And it wore vivid candy red paint with glimmering gold flames, all sprayed by local gunslinger Mike Farley. 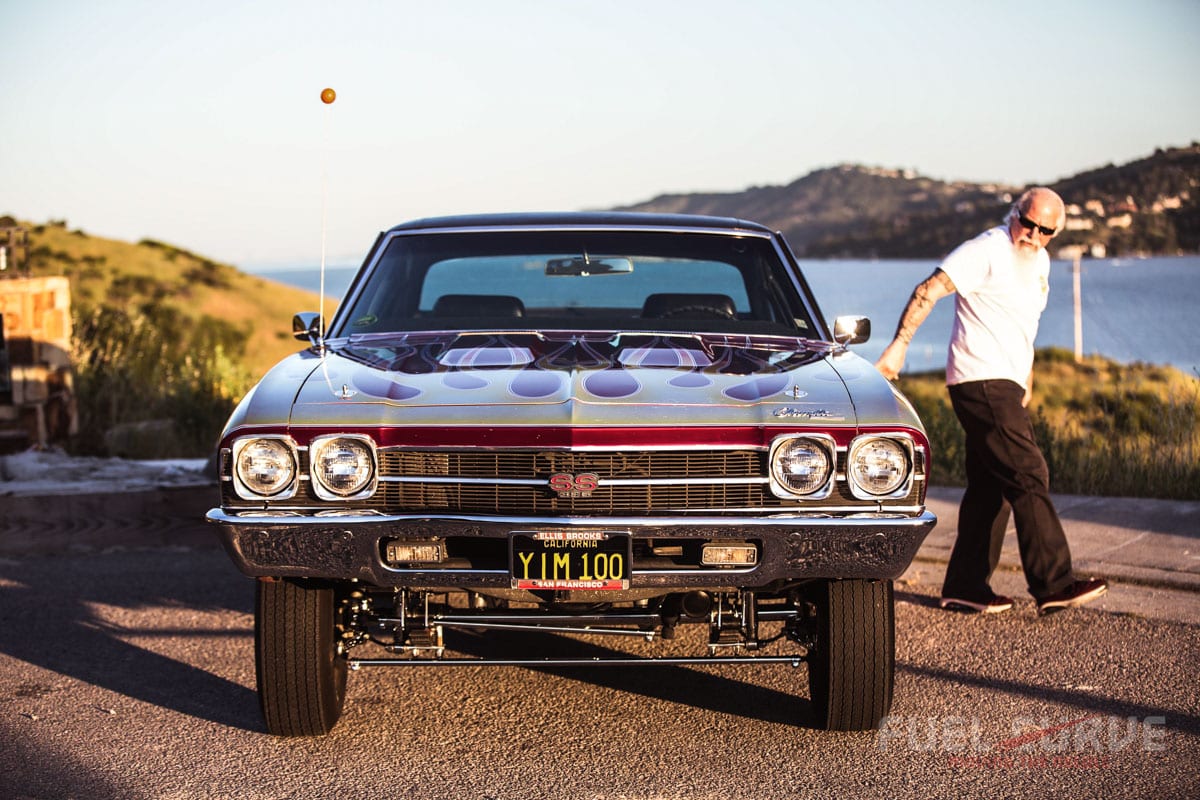 Lou Lafon, his friend Craig, and their buddies cruised the area streets in their own Chevelles and muscle cars during that time and all of them admired Kern’s flamed, high-riding Super Sport. “When it got into Hot Rod magazine it was really popular,” Lou says. “It was the first Gasser with a flat-bottom boat that matched.” Through a stroke of good luck and timing, Craig learned that the straight axle Chevelle and boat were both for sale sometime in the late-’70s. He was quick to pull Lou in on the deal. “Craig is like a brother to me,” Lou says. “He bought the car and I bought the boat.” Both men enjoyed their respective toys for years, with the Chevelle racking up car show awards (and a few more magazine appearances) into the early-’80s. As is so often the case, though, the car became less of a priority as time and life moved on. It became harder for Craig to maintain it in show condition, and it eventually ended up under a cover in a carport. “He called me up one day and said, ‘why don’t you come and get the Chevelle,’” Lou remembers. That was sometime in the early-’90s.

Lou kept the Chevelle safe and secure, but it would be another two decades before it saw a rebirth. When Lou’s brother Tony introduced him to Bill Ganahl and his team at South City Rod & Custom, he knew he’d found a shop worthy of working on the Chevelle. Everyone involved felt the car deserved to be resurrected while retaining as much of its original Street Freak flavor as possible. “I have been involved with a number of historic restorations,” Bill says. “This was along those lines, which is meaningful to me. It’s the first thing we’ve done that’s anywhere near that time period or genre. “The cool thing about that car is that it has Mike Farley’s original paint on it in such good condition,” Bill continues. “You can tell it’s candy right when you see it.” Leaving the old-school paint intact was a primary goal of the car’s rebuild. You can find a few blemishes in the finish, but it still polishes up in a way that’s different from modern materials. Tony Parker touched up some of the pinstriping, but the body was otherwise left alone. Similarly, the South City team cleaned up the original vinyl upholstery on the interior. “Underneath, we didn’t leave any stone unturned,” Bill says. The team stripped the chassis down and rewelded the front frame stub, which had been done by Al’s Automotive (of Al’s Lift Bars fame) back in the early-’70s. They modified some of the straight axle pieces to improve the handling and had many of the plated parts re-chromed. They also had the 12-bolt Posi rearend rebuilt and filled with more street-friendly 3.55:1 gears, though the plating on the housing remains from the ’70s. The Cragar 15×6- and 15×10-inch wheels were outfitted with fresh Firestone F70 (front) and Pro-Trac N50 tires. When the straight axle Chevelle finally rolled out of the South City shop a few years ago, it looked almost exactly like it did in the mid-’70s, which was precisely the point. “We just wanted to leave it like it was,” Lou says. “It was so well known. We didn’t want to do anything to it.” As an added bonus, Lou’s wife Patty tracked down original painter Mike Farley, who came by the shop to see his old handiwork and share a few inside tales. “That was a really neat moment,” Bill says. “Mike saw the car for the first time since the early-’70s. He said it was the first candy job he’d ever done, and it took multiple tries to get it right.” He definitely got it right. Lou says the candy red finish and vivid flames are keys to the Chevelle’s enduring appeal. “It’s the paint job,” he says. “It gets everybody. “Back in the day it was that flashy stuff. Nice paint jobs, chrome, and big motors.”