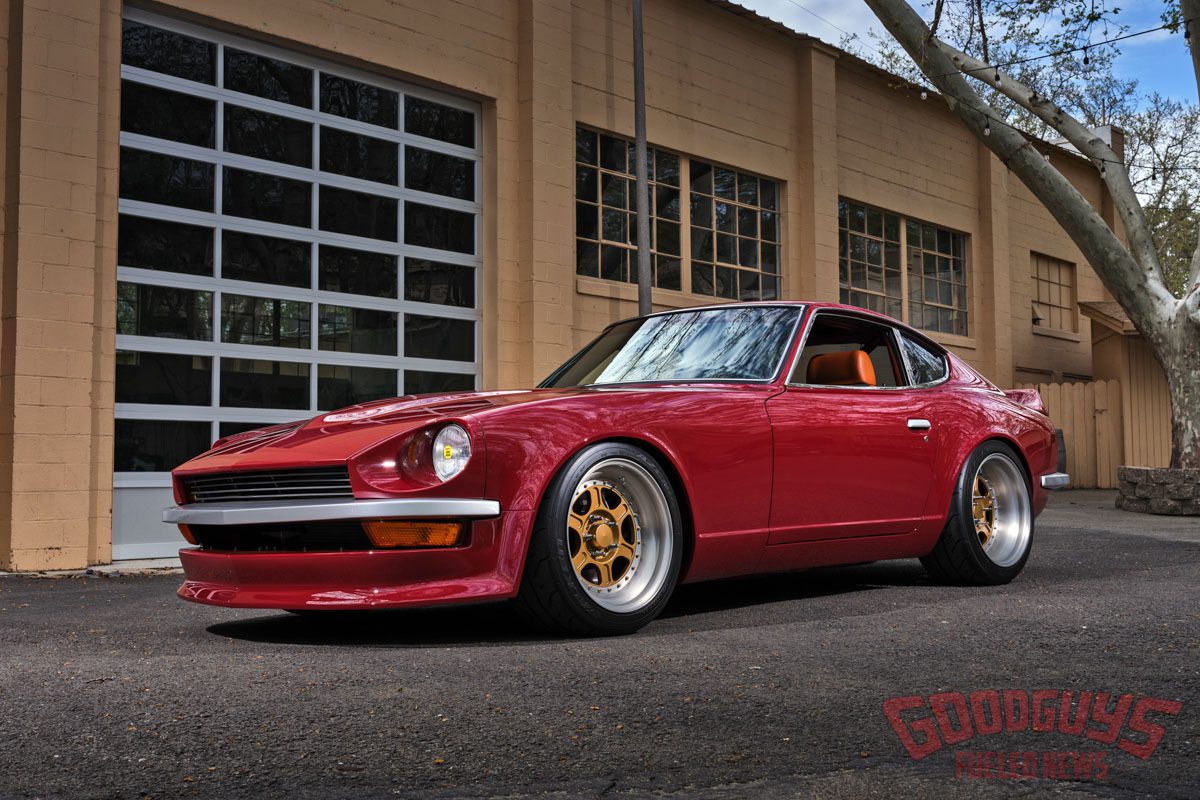 Women are Finding a Place at the Top of the Hot Rod Industry, and Sammi Frazier’s Datsun 240Z is Proof They’ve Earned It

Though intended to showcase new products and services, the SEMA Show – the annual event hosted by the Specialty Equipment Market Association in Las Vegas – has become the preeminent place to debut high-end builds. The organization created a competition in 2014 to showcase these builds. Judged by a panel of the industry’s top names, Battle of the Builders promises to single out the highest-caliber vehicles displayed at the event. The list of prior winners reads like a who’s who of the industry: Kyle Tucker, Bobby Alloway, Troy Trepanier, and brothers Mike and Jim Ring to name a few. To be considered just a candidate is a high-profile quill in any builder’s cap. And to make Top 3, well that’s something on which to build a career. Last year, judges made BotB history by nominating not one but two women to the ranks of three semi-finalists. It wasn’t a matter of two women who partnered to build a car. Rather, it was two women who fielded two entries independent of each other—from two different countries, nonetheless. This ’73 Datsun 240Z was Sammi Frazier’s entry. Working for a six-year period at Campbell Auto Restoration, she and her dad Mark and family friend Mike Kamimoto transformed her once-modest Fairlady into a trophy-getting autocrosser. They disassembled the body to its shell, filled unnecessary holes, and relocated the strut towers 1-3/8-inches rearward to increase caster. Then Mark bent up 1-5/8-inch tubing into an eight-point cage that ties the front and back of the car together by way of the strut towers. The engine began as an ’06-vintage LS2. They tore it down to grind and fill the block and heads for paint and buttoned it back up with a COMP Cams XFI camshaft and a Speedmaster eight-stack manifold. Trimming the velocity stacks lets the assembly hide under the unmodified hood. Hotwire Auto made the engine a plug-and-play installation with one of its harnesses. The engine feeds a Borg-Warner T56. TBR Garage wrung an impressive 420 horsepower from it. “(It’s got) good bottom end and midrange power,” Sammi notes. “Great for an autocross car.” To accommodate the wide tires, the crew replaced the fenders and quarters with wider ZTrix “Subtle Z” fiberglass. To improve the transitions, they reshaped the bottoms of the doors and the flared panels. The crew eliminated the front-bumper’s rubber filler and tucked the bumper closer to the body, a job that required extending the bumper pockets deeper into the Subtle Z fenders and air dam. They also extended the upper bumper flange back to the grille and fabricated a chin panel to duct most of the incoming air directly at the radiator. That radiator sits in a similarly bespoke tray and its fans mount to a shroud built to efficiently use every inch of precious engine bay. They bobbed the rear bumper’s ends and splayed them to make it fit the wider quarter panels. The shorter ends meant reducing the length of the quarters’ bumper pockets. The rear spoiler started as a Brock Racing Enterprises piece that they notched.

A second exhaust opening cut from the rear apron restores symmetry and accommodates a pair of pipes. Given the girth of the transmission and the relatively narrow tunnel, it’s amazing that they could fit 3-inches of pipe on each side, much less an X pipe under the tailshaft housing. Replacing the spare tire well with a flat trunk floor gave up room for a third-gen F-body fuel tank that mounts in a specially shaped saddle. Sammi describes the custom blended Glasurit paint as either a rich maroon or a black cherry depending on how light plays on the surface. The interior’s apparent simplicity belies countless hours spent trying to hide a grip of work. Steel panels, some with flared holes, cover the rocker boxes, rear strut towers, and even the gaps created by running the cage’s A-pillar tubes through the dash. Laminated fiberglass covers conceal the cage bars and close out the interior’s many cavities, including the ones that accommodate the JL Audio components like the 8-inch subwoofer enclosures tucked behind the rear wheel wells. Some modifications were born of pure function. For example, they moved the driver’s side Corbeau seat forward to fit Sammi’s 5′ 5″ frame but made the bottom cushion removable to fit her 6-foot dad. And some tweaks are purely clever. “My nickname is Chapstick,” Sammi reveals, “so we put a Chapstick holder (in the console) and made it look like the sub dial.” Vince Dubuque trimmed the cabin in Canyon-colored Avion-series Garrett Leather, duplicating the diamond-pleated pattern that Datsun used on the rockers and flat panels. He also trimmed the dash in Alcantara microfiber. Classic Instruments supplied the Velocity-series gauges that fit in the dash’s modified openings. Simple body-colored panels mount the Alpine head unit and the Vintage Air control unit for the in-dash heater. We wish we could report that Sammi Frazier and her crew won the 2021 Battle of the Builders with her Z car – by all accounts it was worthy, and we don’t envy the judges’ position. But what Sammi and fellow semi-finalist Chelsie Lesnoski pulled off is nothing short of a coup. And if their entries – both original and each exceptionally rendered – are a sign of things to come, then some of you boys better start stepping up your game.