With several projects from Kindig-it Design in his garage, Goodguys regular Ron Meis decided it was time for an open-wheeled car with a little more agility than his GTO and ’59 Buick. After hashing out a build plan they decided to use the redesigned ’27 T roadster from Dynamic Corvettes and Shadow Rods in Saginaw, Michigan. The XL27 has two more inches of room and sits low over a matching ’32-style frame. The chassis is set up on a cantilever front suspension by Greening Auto. This allows the I-beam to hang out in front of the grille and frame ends. A Currie 9-inch on coil-overs resides out back, and Wilwood brakes back the custom one-off wheels that were designed by Dave Kindig and machined by Billet Specialties. Excelsior tires wrap the 16- and 18-inch rollers in style. Greening made the 9-inch headlights and ’39-style taillights, while Kindig-it made the hood and sides. The paint is called “Bubbly” from a new Modern Classikk line now offered by Kindig-it. Power for the roadster is an LS3 from GM Performance. It’s been topped with a Hurricane manifold from Harrop, of Australia. It’s a true race-inspired individual throttle body intake with long straight ports for maximum efficiency. The LS3 was also treated to a set of finned Chevy small block valve covers from Offenhauser, MSD ignition, and one-off headers with a Borla exhaust. It’s backed with a 4L60E trans. Finned air cleaners, a billet belt drive system, and bronze paint round things out. JS Interiors shares the shop complex with Kindig-it, making things easy. They custom-molded the seat before trimming it, and the other surfaces, in Terracotta leather from Hydes Leather. Highlights include ribbed door trim inserts, storage pockets, and a center console with cup holders. There’s also a full audio system, as Ron likes his drinks cold and his music clear. Dakota Digital modified one of their VHX-33F gauge units to mount in the center of the dash. It’s styled after the 1933-’34 Fords. A Lokar shifter and a smaller-diameter ’49 Ford wheel from Kochs were chosen, and of course it has full heat and air. It’s called the Grocery Getter, and rest assured Ron uses it to run errands, both near and far from his home. 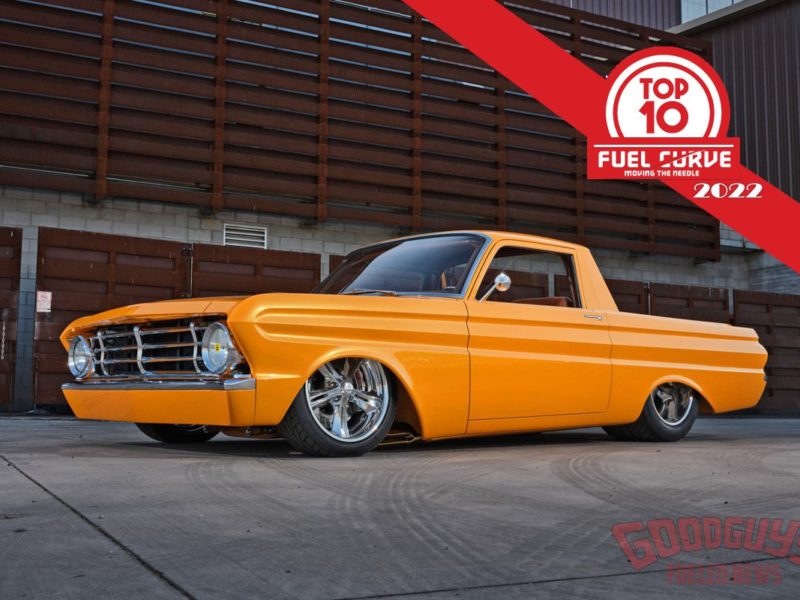