In the ’80s and early-’90s, chrome was not necessarily the preferred trim and bumper finish in the world of high-performance machines. Bumpers and trim went from shine to sheen.

If you were at Goodguys Indy, or other events like the Street Machine Nationals in Springfield or DuQuoin, you know what the deal was. Vivid pastel colors, beltline graphics, meaty rear tires, tunnel rams or blowers, wheelie bars, and in some cases, parachutes prevailed – yes, parachutes on show cars. It happened.

The hard-hitting cars of the era were a blend of strip meets street. They didn’t get driven very far back then as it was all about straight-line acceleration and excess. More was better whether it was on the radio (Motley Crue, Prince, Madonna) or at the car show. Rick Dobbertin’s Pontiac J-2000, Matt and Debbie Hay’s Olds Ciera, Rod Saboury’s ’63 Corvette, and Rocky Robertson’s high-tech Buick Somerset were prime examples of these memorable, outrageous machines. As the decade progressed, so did the build quality. The styling game shifted in 1988 when 16-year-old Troy Trepanier restyled his grandfather’s ’66 Chevelle. The car, Troy’s first real build, had all of the Pro Street essentials of the era but with a new twist. It was painted raspberry pink. Not only that, all of it was painted: bumpers, trim, headlight surrounds, even the grille’s bowtie emblem didn’t escape the spray gun. Troy’s Chevelle helped set what was to become the monochrome trend. While Troy and his dad Jack were doing their thing with the Chevelle, veteran Pro Streeter Scott Sullivan debuted “Cheez Whiz.” A stunning bright orange ’55 Chevy, Cheez Whiz was purposely devoid of multicolor schemes and featured minimal bling. While it personified the emerging monochrome look, Sullivan went with subtle amounts of brushed trim, some of which was actually airbrushed. The car blew people’s minds. It steered the scene in a new direction as far as design and build quality. Across America, weekend warriors were busy in their garages color matching their rides as a result. When asked about the look in a recent conversation, Sullivan explained he wasn’t intentionally going for the monochrome vibe. “More than anything, I was looking for a race car look, so I color matched the bumpers and window trim,” he said.


Moreover, Sullivan proved you could drive the wheels off this new breed of street machine. Although it had plenty of rake and rear tire, Cheez Whiz wasn’t a “Pro Fairgrounds” car, loping loudly and chirping tires within the confines of show grounds. Sullivan talked his friend and magazine scribe Jeff Smith into riding shotgun with him from Dayton, Ohio, to Southern California. No big back tire cars had attempted a feat like this at the time. A car that looked this good being driven across country solidified it as one of the scene’s most legendary cars. In fact, it looks just as good today as it did in the summer of ’88. It should also be noted that the Whiz’s cross-country trek and resulting headlines inspired Boyd Coddington to plan a cross country drive with CadZZilla, but that’s another story for another day. If you go back and study the hot-rodding landscape, cars come along once every decade or so that literally change the game. Cheez Whiz was it. Taking ideas and motivation from Cheez Whiz, Trepanier debuted a big-finned ’60 Chevy Impala in 1990 – a car no street machiner had attempted to mod. Cloaked entirely in bright teal green – bumpers, trim, engine, all of it – he succeeded in taking a big-finned ’60s cruiser, adding late-model power, and driving it as far and wide as he could. It was a wildly popular car and a definitive launching point for Troy’s ascension to hot rodding’s elite.

Reflecting on that seminal period, Trepanier was candid and offered a simple explanation for the monochrome days. “Scott’s car definitely had some influence on some of my decisions,” Troy said from his shop in Manteno, Illinois. “I didn’t really have the money to chrome stuff, so that kind of pushed me in the direction of painting everything. At the time it just seemed cleaner to me.”

Sullivan’s follow up to Cheez Whiz was a bitchin’ black ’57 Chevy. He went with traditional shiny chrome brightwork, essentially steering away from bright colors because Scott Sullivan didn’t really follow trends. He was content with Cheez Whiz being his contribution to the era.

On the other hand, Troy’s follow up to teal green Impala was even more outlandish and bodacious. Like the Impala, Troy built another car that nobody had ever modded into a street machine – a ’50 Buick Sedanette. It was monochrome peach with an eggplant purple top. The Buick livery was airbrushed and the famed portholes were brushed aluminium. The toothy grill was painted peach and the Boyd wheels were brushed aluminum with matching peach centers. The two tone-look was the brainchild of Troy and artist Steve Stanford. Coined “Bumongous” by Hot Rod’s Gray Baskerville, the bright Buick had classic looks with outrageous, 800hp nitrous-fed big block power. New and noteworthy was the way Troy uncluttered the engine bay by running the water pump’s lower hose through the frame and backward-mounting the air–conditioning compressor and alternator to the frame while being driven with a single-tooth belt. Further refinements included using the left fender well to house and hide the crank-triggered MSD ignition system, remote oil filter, and the dual master cylinder system. The right fender well hid other essentials. The trend of hiding engine components and turning engine bays into artwork stuck around for decades and in a lot of instances still remains to this day.

We all know where Troy went in the years following Bumongous. He drifted from crazy colors to refined, trendsetting, cutting-edge machines with incredible, coachbuilt looks and one-off concepts, pushing the envelope as far as possible. George Poteet’s “Sniper” – a radical Viper V10-powered ’54 Plymouth – became the benchmark before the clock struck Y2K.

In hot rodding, trends overlap at times. Our scene is ever evolving. While Sniper was being conceived and crafted at Rad Rides, a guy named Mark Stielow was putting together a ’69 Camaro for the One Lap of America event. He implemented road race suspension and cornering ability into a ’60s muscle car, setting the stage for today’s pro-touring scene which is still going strong.

Looking back, one might ask what the heck were we thinking with outlandish monochrome colors, painted trim, huge meats and all that? Like big ’80s hair, Oakley Blade sunglasses and elastic-waist muscle pants, it happened. Brash and bold was the goal, and we’re unlikely to see an era that colorful again. 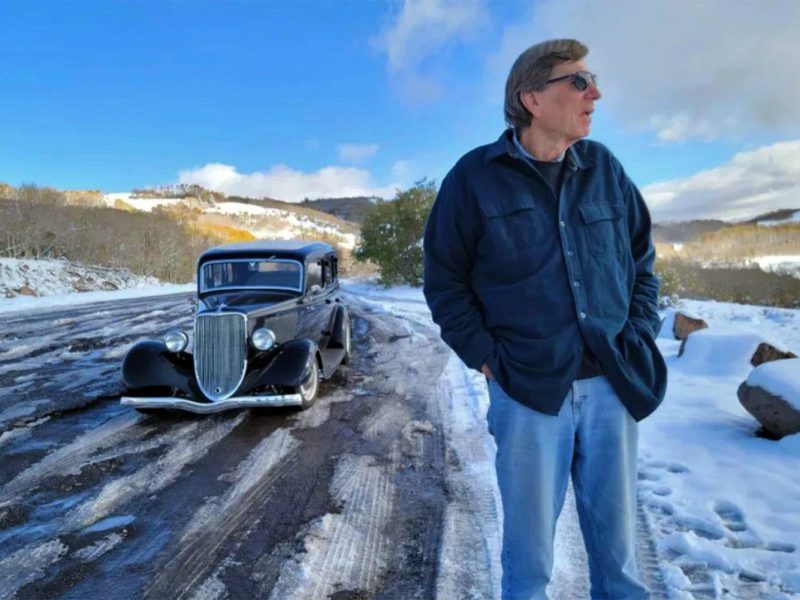