As curious as the world of beauty pageants can seem these days, many famous celebrities began their careers as Miss Whatevers. Journalist Diane Sawyer was America’s Junior Miss in 1963. Michelle Pfeiffer earned the 1978 Miss Orange Country title. Oprah Winfrey was crowned Miss Black Tennessee in 1971. And the 1961 Miss Georgia Poultry? None other than motorsports’ own Linda Vaughn.

Endowed with an engaging personality and winsome appearance, Linda Vaughn parlayed her pageantry chops into becoming synonymous with performance automotive marketing. From the early-1960s through the 1980s, Vaughn was a ubiquitous presence at major drag races, NASCAR events, and industry trade shows. Her nickname – First Lady of Motorsports – was well deserved. Linda Vaughn was born August 11, 1942 in Dalton, Georgia, to a family with a blend of bloodlines that would give 23andMe pause – German, Irish, and Native American. Always an enterprising sort, she earned a dental technician license before she even graduated high school. But she had loftier ambitions.

Keenly aware that her physical looks were above average, she took a chance and entered the Miss Dalton beauty pageant in 1961 and to her surprise she came home with the tiara. Encouraged by the potential this pursuit could provide, Linda entered a series of other of Miss showdowns, winning Miss George Poultry, Miss Atlanta and, more significantly, Miss Atlanta International Raceway.

The raceway title proved a turning point. While her responsibilities were mostly lip-locking winning drivers and presenting trophies, the track owners knew she was something special, and they recruited her to boost attendance at the annual Atlanta 500 NASCAR race. One stunt was particularly effective – dancing “The Twist” with stock car star Glenn “Fireball” Roberts. The resulting image of the duo contorting their midsections in rhythm to the vocals of Chubby Checker launched a million column inches of publicity. The legend of Linda Vaughn was on its way.


Soon thereafter she scored another beauty crown, Queen of Speed, a competition among racetrack belles. This led her to riding shotgun in the 1962 Daytona 500 pace car. At this point, Ms. Vaughn was fast becoming a fan favorite thanks to her looks and personality. Fans couldn’t get enough of the 5’1” dynamo. Her appeal did not go unnoticed by corporate marketing types.

Pure Oil Company hired her to be something called Miss Firebird. (No relation to the Pontiac Firebird, which was yet to debut.) Naturally, Miss Firebird required a Miss Firebird float, atop which Vaughn adorned with aplomb. Her fame was goosed further by a Miss Firebird photo spread in Esquire magazine.

Enter Hurst Performance, the aftermarket company best known for transmission shift levers. Hurst had a history of deploying women in its marketing campaigns and in 1966 hooked up with Hot Rod magazine for a competition to crown the next Miss Golden Shifter. Linda’s va-va-vroomness, along with her business-savvy presentation to the Hurst board of directors, easily won the day. In addition to holding the Golden Shifter title, she was also handed the keys to a new Pontiac GTO.

So began one of the most enduring marketing partnerships in motorsports, a 13-year-run that catapulted Vaughn’s fame into rock-star status and quick shifted Hurst sales into overdrive. She made her debut at the 1966 NHRA Winternationals in Pomona. She was in crazy demand all weekend. By the time the sun set on the nearby San Gabriel Mountains, she was as smitten with drag racing as its fans – and Hurst execs – were with her. What followed could only be described as LindaMania. She became in demand at dozens of racetracks across the country. At major events – Daytona 500, US National Drags, Indy 500, etc. – she could barely weave her way through the phalanx of fans looking for an autograph or a smile. This being the Vietnam era, Vaughn and Hurst’s Armed Force Club visited the troops in southeast Asia. She also represented Hurst at major trade shows, such as SEMA.

Even her wedding in 1972 to Bill Tidwell had a publicity angle, as the nuptials took place during Lions Drag Strip’s “Last Drag Race,” which was dedicated to the famous couple.

Vaughn’s Hurst Shifter reign continued through 1976 when she stepped back from her duties to branch out into other aspects of radio and television advertising. However, her fans were having none of it; they wouldn’t let her go. Heeding to popular demand, she continued a demanding event schedule throughout the 1980s. In 1989 alone she made 134 appearances and chocked up more flight miles than George Clooney in “Up in the Air.”

“The difference with Linda is her magic combination of ‘beauty plus brains,’” one industry insider explained to automotive historian David Fetherston. The industry was in complete agreement: Her tiara-filled trophy case also includes the Car Craft magazine Ollie Award and SEMA 1987 Person of the Year and SEMA Hall of Fame. She also appeared with the late Burt Reynolds in the film “Stroker Ace.” Her decades in the public eye allowed her to meet and befriend many celebrities, from Paul Newman to Gene Hackman, Neil Diamond to Bruce Springsteen, A.J. Foyt to Don Garlits. 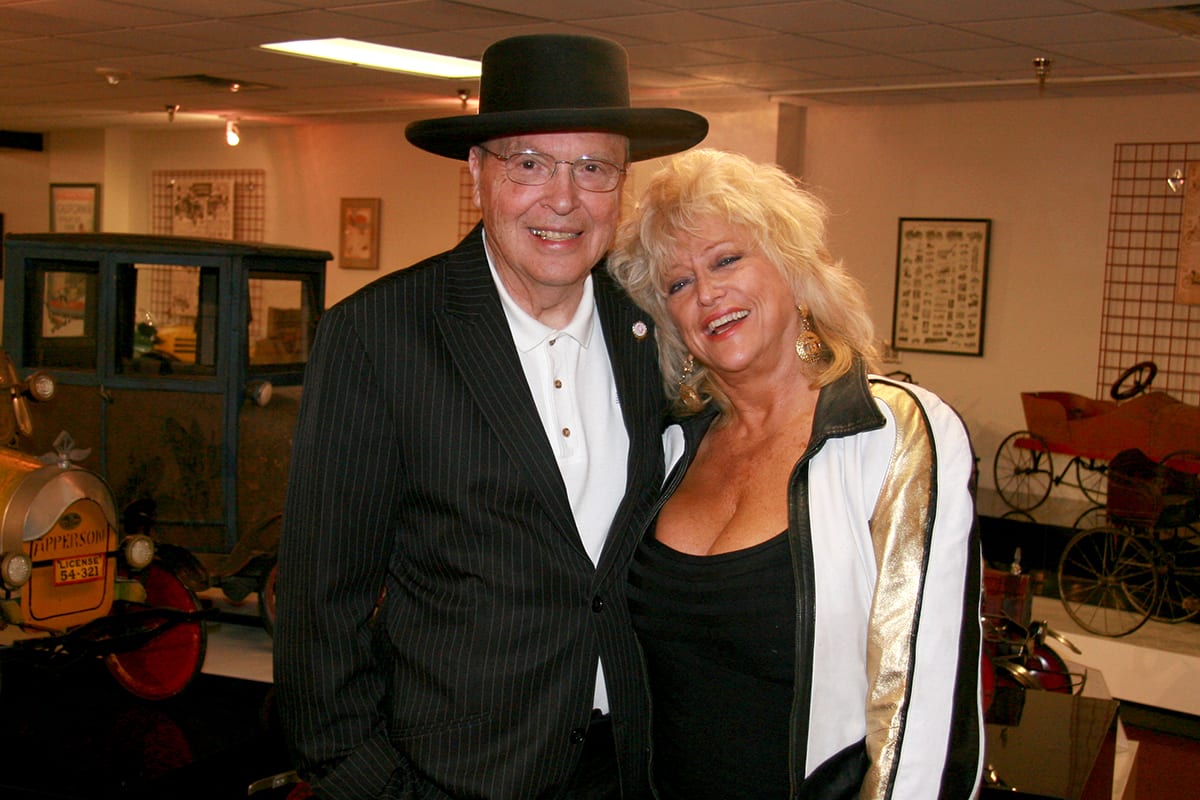 Hot rodding and motor racing is overwhelmingly male dominated. Just a fact. Still, a handful of strong women have broken through. Shirley Muldowney, Janet Guthrie, and Danica Patrick, to name a few. And while Linda Vaughn wasn’t a driver or crew chief, her impact on motorsports has been equally impressive. In other words, her status as a legend of hot rodding is assured.