That’s the way Don Hansen begins the description of his highboy 1932 Ford pickup, a street rod that has taken him to nearly every corner of the United States over the past 48 years, racking up more than 250,000 miles along the way. Don’s home is in Rockford, Illinois, not far from Chicago. But he’s never been afraid of venturing out from this central location to travel to events. It’s kind of a way of life. “I’ve been to Pomona, Scottsdale, Baltimore…five or six times to Texas,” Don says. “And all the Midwest events – Ohio, Kansas, Iowa. I’ve been to almost every coast.” It was probably hard for Don to imagine the adventures he would have in the truck when he began that first rebuild in the early-’70s. It included a 301c.i. small-block Chevy, three-speed transmission, a ’56 Chevy rearend, and full fenders. He drove the pickup like that for 100,000 miles – sometimes as daily transportation, but also going to rod runs and car shows, often with his wife Caroline and sons coming along.

Don took the truck apart again in 1989 and spent the next couple of years rebuilding it. “My friend Ken Barnhart did most of the work on it,” Don says. That included a new Roadster Shop chassis, a 355c.i. small block backed by a TH350 transmission, and a 9-inch rearend. It also included a new look as a highboy. Derek Traum finished it off with maroon paint and a nose full of bold tan scallops. A little Southwest scenery during a road trip to the left coast.

Beginning with a maiden voyage to Michigan in 1991, the truck has seen 158,000 miles crisscrossing the country to events. All that travel has led to many lasting friendships with other rodders – Don can frequently be seen on the road with guys like Dale Grau, Jesse James, John Roetzer, Greg Southworth, Bill Boland, and Dave Ruhs. The late Ron Hickman was also part of their pack. “I’ve had some good trips with some good guys,” Don says. Caroline traveled with Don through the ’90s but was unable to continue after her failing health began requiring specialized care beginning in 2001. Don’s grandson, Joshua, has also been along on many of Don’s journeys.

Traveling in a street rod makes it easy to meet new people, Don says. Not only has he met some of his longtime traveling companions at street rod events, he has also made other more casual, but equally positive connections. Don recalls a 2012 trip to Texas in particular when his old pickup introduced him to new people. Visiting the Dale Earnhardt Museum during a trip to North Carolina.

“I went 3,000 miles in three weeks, most of it by myself,” Don recalls. After attending an event near Austin with some of his regular traveling buddies, Don stayed behind for a couple extra days so he could see musician Junior Brown at The Continental Club. A chance encounter with a couple who noticed his truck at the hotel led to them all three attending and enjoying the concert together. “I was all by myself and met some strangers and had a beautiful evening,” Don says.

A similar thing happened the following weekend when Don was attending the Goodguys Lone Star Nationals in Fort Worth. He met a couple at the hotel and ended up going to dinner with them and enjoying an evening driving around and seeing the sights in the area. None of this would have happened without Don’s truck as a conversation starter. Don’s pickup in the winner’s circle at the Goodguys Southeastern Nationals in Charlotte, North Carolina.

When Don returned home from that Texas trip, he relayed his experiences to the nurse who was caring for Caroline, whose health was quickly declining. The nurse was certain a higher power was at play. “HE wanted you to have a good time,” she said. “He knew what you were going to face when you got back here.” Don’s wife passed not long after that.

You might notice a matching maroon roadster – minus scallops – on here, too. Don bought it in 2013 and, of course, it has a story. Built by Jay Carter for Scott McCollough (who was a co-owner at Rock Valley Auto Parts), it’s a clean traditional-style ride with a Roadster Shop chassis, Brookville body, small-block Chevy, and 700R4 transmission. When Scott was ready to have the car painted, he asked Don if it was OK to paint it the same color as Don’s truck, and Don obliged him. He’s convinced now that there was an ulterior motive. “Scott’s the type of guy who doesn’t keep anything very long,” Don says. “When I saw that roadster, I had to have it.”

It took a few years, but Don did eventually buy the roadster. He had his own ulterior motive, as well. “One of the biggest
reasons I bought the roadster was because I was going to the L.A. Roadsters 50th [the anniversary of the annual Father’s Day event in 2014], so I thought I needed a roadster,” Don says. The return journey from that trip to L.A. resulted in one of Don’s favorite road stories – experiencing the Moki Dugway in Monument Valley, Utah. “We were on a blacktop road up in the mountains and we came up on this wide spot in the road and a big sign said, ‘End of Pavement,’” Don recalls. “It was switchbacks, and they went almost straight down – 3.5 miles of gravel, and no guardrails. It was first gear all the way down.” 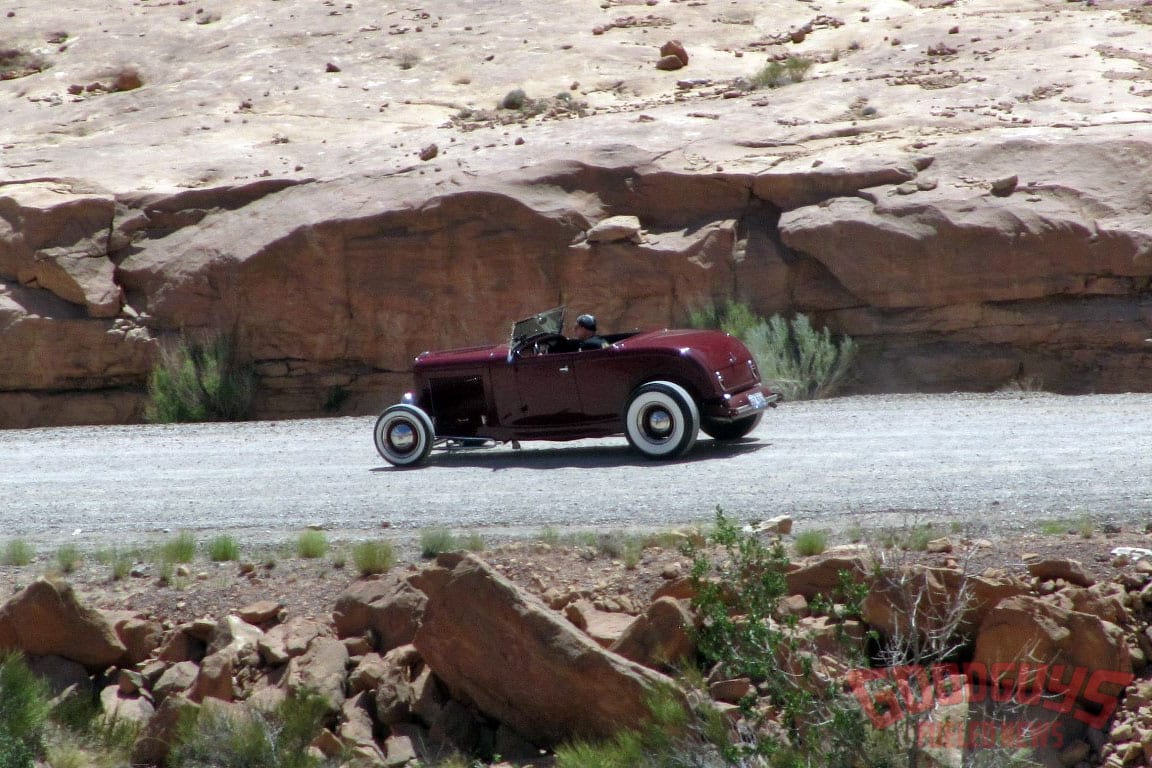 Given how fresh the car still was at that time, Don was initially a little perturbed. His tune has since changed. “After it was all said and done, it was one of the highlights of that trip,” Don says. “I’ve probably told that story 200 times.” Like any well-traveled rodder, Don has learned that surprises and breakdowns are sometimes how memories are made. It’s something that was reinforced when Don had an axle bearing go out on a Goodguys Cruise to Columbus caravan. With the help of several other rodders in the caravan – including Jesse James, John Roetzer, and Bobby and Margaret Coln – Don spent most of the day under the shade of a tree replacing the bearing. This included finding a shop to press on a new bearing and grinding the old retainer out of the axle housing, which had practically become welded in place due to the heat. Soaking in some California sun in front of the NHRA Museum in Pomona.

As Don was helping John Roetzer with the repair, he bemoaned the frustration and time lost. “It’s no big deal,” John replied, “we’re making memories.” 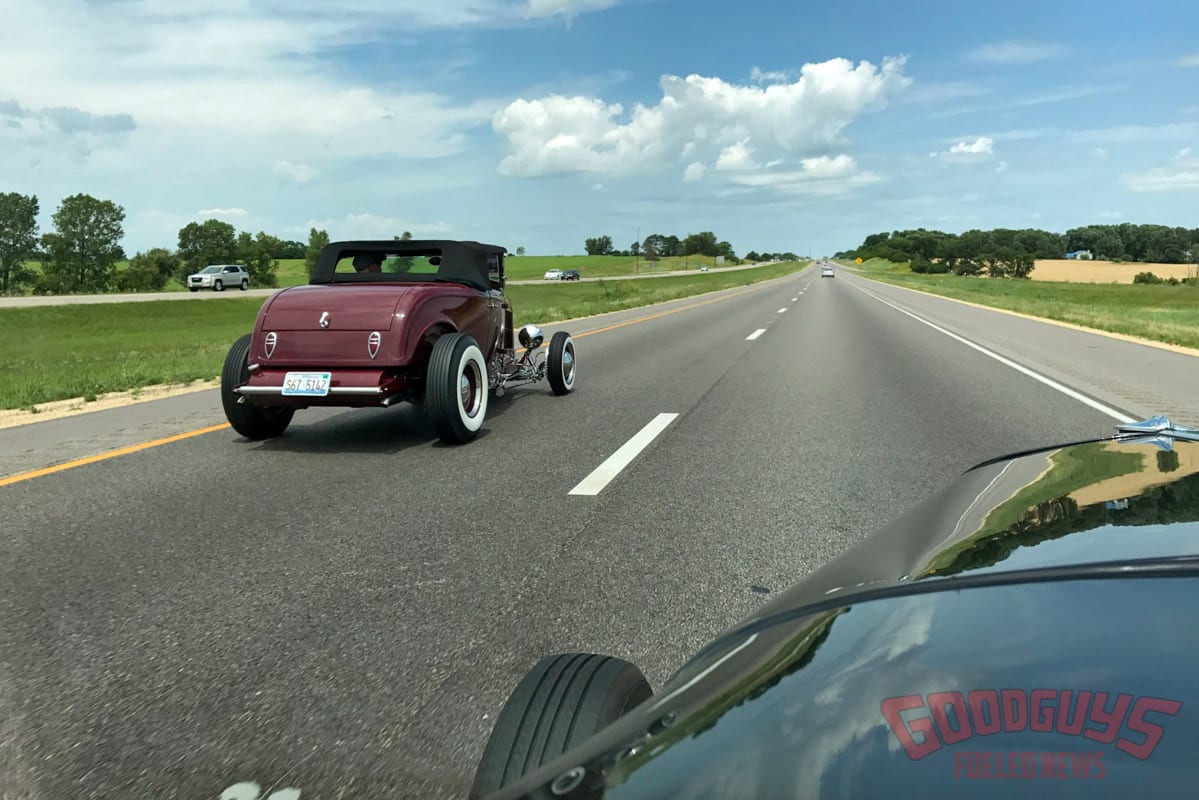 As time has passed, Don has come to realize the truth in that statement. “We were making memories,” Don says. And isn’t that one of the best parts about taking road trips in old cars? 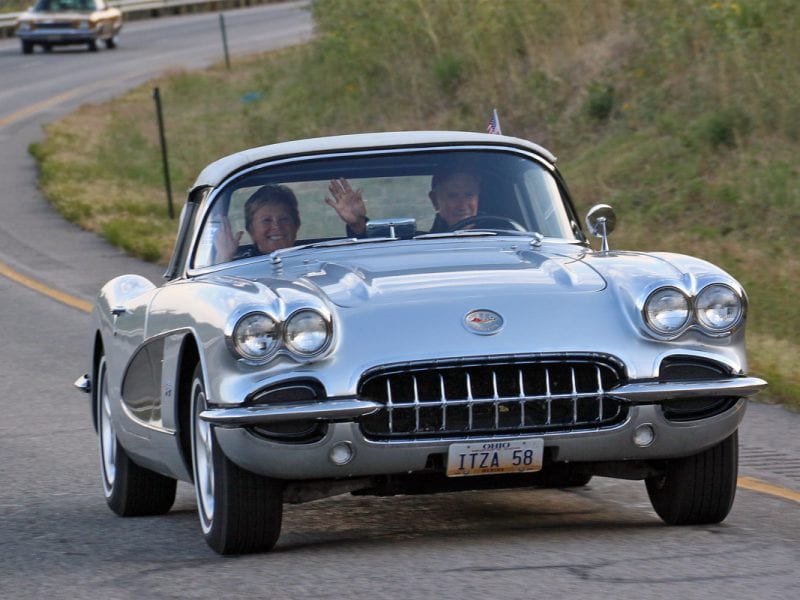