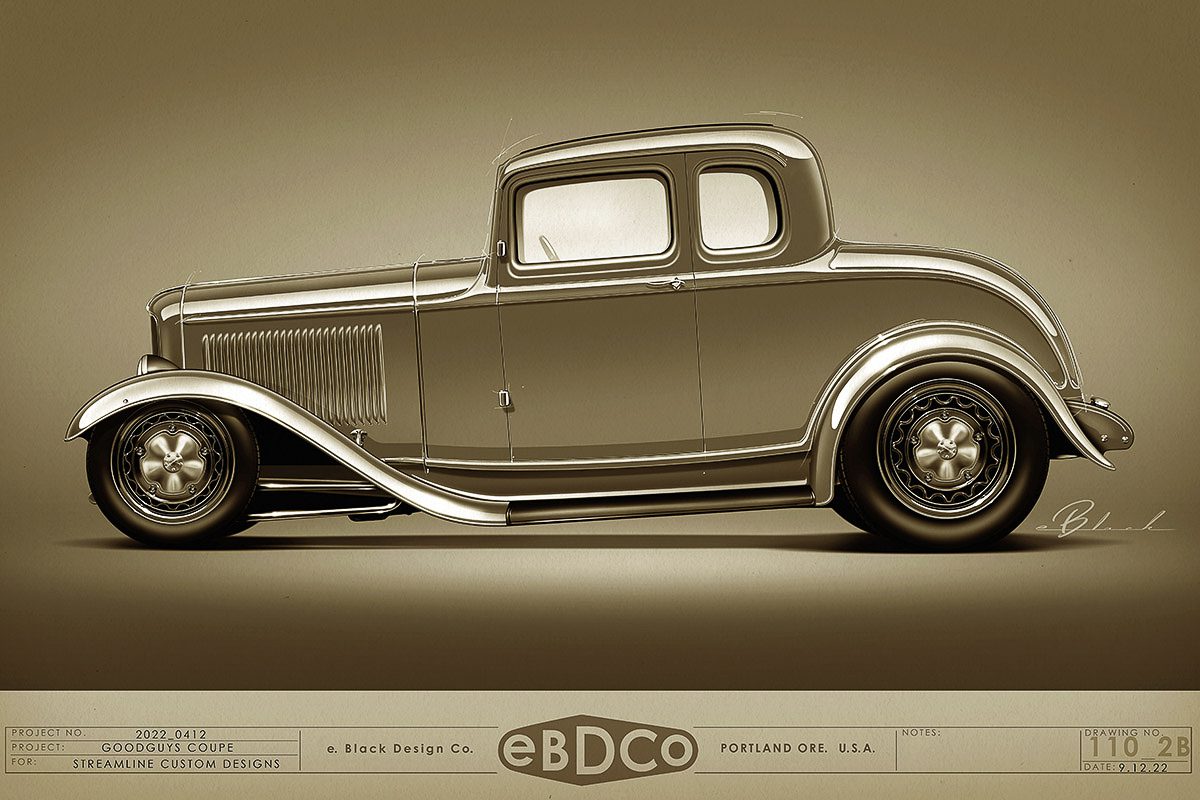 Goodguys is getting back to the roots of the association – and the roots of hot rodding – with an all-new build for the 2023/2024 Grand Prize Giveaway vehicle. We’re teaming up with Streamline Custom Designs, United Pacific, Johnson’s Hot Rod Shop, and a host of top names in the hot rod aftermarket to build the quintessential hot rod – a little Deuce coupe!

As we wind down the 2022 season and the 90th anniversary of the ’32 Ford, it seemed a fitting time to dive into a Deuce project. Truth be told, this giveaway vehicle has been in the planning stages for quite a while already, we just needed to start gathering parts and having conversations with key players to get things moving. One major factor in any giveaway vehicle is finding the right shop to build it, and Goodguys hit a home run when we reached out to Streamline Custom Designs in Tooele, Utah. Not only has this young shop demonstrated high standards in design and construction, but its co-owners – Isaac Gonzales and Donnie Hall – are both second-generation rodders with a strong interest in hot rod tradition.

“Being car guys, and knowing about Goodguys, we’ve always been tuned in and aware of the giveaway car and the shops being tapped for those builds,” Isaac says. “They were always phenomenal builds. We’re honored to be a part of this process.”

Not only that, but Isaac says Donnie has always been a fan of ’32 Fords, making this project an especially good fit. “When Goodguys called and asked us if we’d be interested in building a ’32 Ford coupe, it was just a slam dunk,” Isaac says. “Sometimes the universe just aligns.

“We focus on building turn-key ’32 Fords, as well,” Isaac continues. “We’re trying to cultivate this next generation and keeping this culture alive. We want to make sure this legacy continues.”

Another company that is working to keep the hot rod legacy alive is United Pacific, which has been offering all-steel reproduction ’32 Ford five-window coupe body panels for several years. Built using precision tooling to replicate original Ford panels, these all-new sheetmetal panels recreate the classic five-window coupe and retain stock-style features like the cowl vent and open roof with wood framework for a cloth insert. As any builder will tell you, starting with fresh steel is a major advantage compared to first fixing damaged, rusty, or deteriorated 90-year-old metal. There’s nothing like starting with fresh, clean metal for a hot rod build! The ’32 Ford five-window coupe body assembled with all-new panels from United Pacific is a dead ringer for an original and is just begging for a little hot rod attitude. We look forward to the touches Streamline Custom Designs has in store!

Beyond the basic body shell, doors, and trunk lid, United Pacific has supplied a stock-style firewall and floor to complete the assembly. We also had them ship fenders to the shop, as the plan is to build a full-fendered hot rod. Just like shoes can make or break an outfit, wheels and tires can really define a hot rod. We’re excited that this Deuce will be getting a set of Classic Wide Five wheels from Johnson’s Hot Rod Shop, which combine the vintage look of ’30s-era Ford wide five wheels with modern materials and construction.

The more we talked with Isaac and Donnie, the more adamant they were that the car absolutely had to sit right and incorporate a cool wheel and tire combination. The duo frequently works with artist Eric Black for design renderings, and when they pulled him into the conversation, one name kept coming to the surface for a chassis and wheels that would put this project on the right course: Alan Johnson from Johnson’s Hot Rod Shop.

“I’ve done quite a few giveaway car projects,” Eric says. “They’re always a bit of a challenge because you’re dealing with specific vendors. With this one, we’re hooked up with Johnson’s Hot Rod Shop for a chassis and wheels and tires. The fact that they’re involved is huge. I have full confidence they’ll set the stance up well. That’s key on a ’32. They’ll put the wheels in the right place, that’s for sure.”

That “right place” on the front wheels is usually an inch or so forward from stock. “It just puts the front wheel in a nice little pocket in the front fender,” Eric says. Of course, the stance will be nice and low, too, thanks to the dropped front axle and signature tweaks and modifications Johnson has developed in building award-winning rides through the years. After building many award-winning Deuces, Johnson’s Hot Rod Shop is well versed on building chassis that deliver a great stance and road-proven performance. This starts with custom boxed frame rails and continues with a host of suspension parts from the JHRS product line.

Not only will the wheels be in the right place, they’ll also be the right wheels to really set this coupe apart from the crowd. We’re talking about the new Classic Wide Five wheels, which also come from JHRS. It’s a “modern vintage” approach to the traditional artillery wheels long used by hot rodders. The wheels deliver that traditional look but are available in conventional modern bolt patterns, or to fit 1936-39 Ford wide five hubs. The 16×5- and 18×7-inch sizing will help deliver a classic hot rod rake when paired with the right tires. 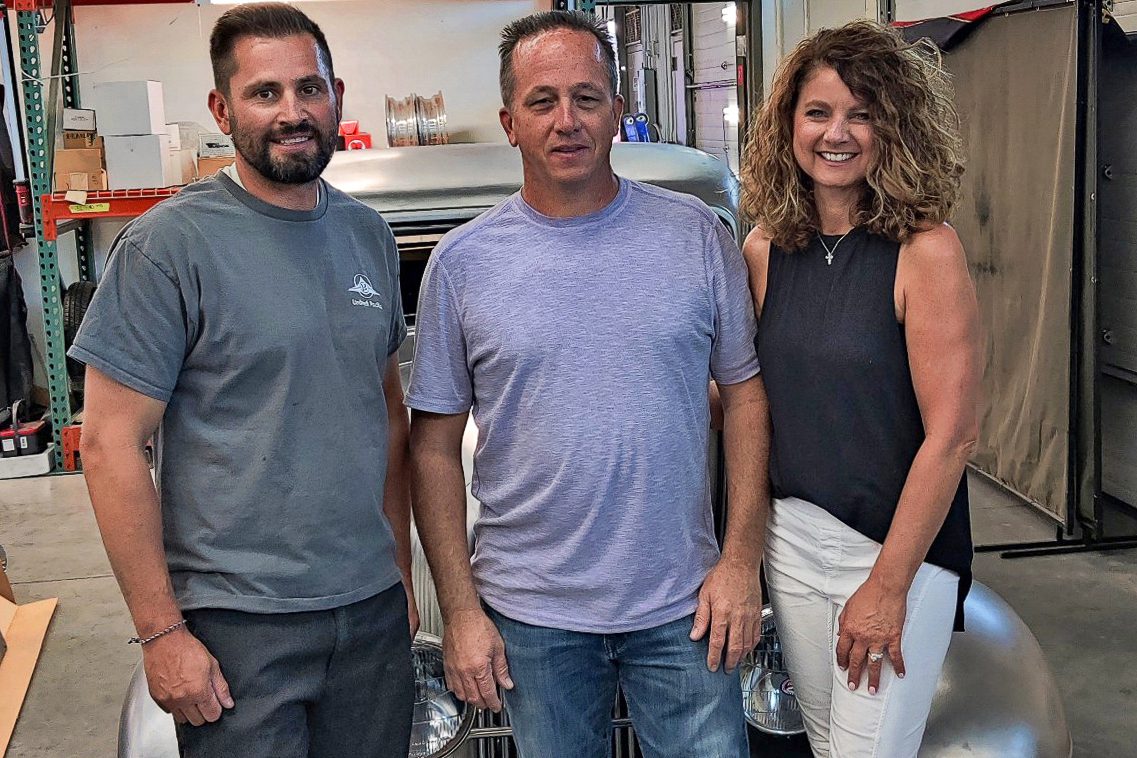 Streamline’s Donnie Hall got to discuss the Goodguys Grand Prize Giveaway project with Alan and Angie Johnson from Johnson’s Hot Rod Shop earlier this year during the rained-out Bonneville Speed Week. Alan liked the shop’s vision and direction provided by Eric Black’s illustration and will be providing the frame, suspension, wheels, and related parts for the project.

So, we’ve got the “dropped” part, but will this cool coupe be chopped, too? “We’ve been playing around with chop, or no chop, or how much chop,” Eric says, noting that, from his perspective, a full-fendered car doesn’t beg for a significant top chop the same way a highboy might. The latest rendering as of press time incorporates a slight slice – maybe an inch-and-a-half. “A lot of people won’t notice it, they’ll just wonder why it looks so good,” Eric says. Is it Christmas already? Here’s a pile of parts that would get any hot rodder excited to start a new project! A brand-new ’32 Ford five-window body built using United Pacific parts, plus great supporting pieces like a Roush crate engine and more! We’re sure there will be plenty more boxes and deliveries arriving at Streamline Custom Designs in the months to come.

Other details, like color and interior elements, will be sorted out in the coming months. Eric says he plans to use a lot of restraint on the interior design while relying on high-quality materials and well-considered details for impact. “Even with a restrained design, we like to throw in some sort of nugget that changes things up,” he says. “I don’t know what that is yet.” One thing we do know is how this Deuce will be powered. Roush Performance has already stepped up to supply a 347c.i. stroker small block crate engine – a great choice for Ford-in-a-Ford motivation. With forged pistons, a roller cam, aluminum heads, and other premium parts helping to produce 410-horsepower, it should be an ideal powerplant for this hot rod. Plans are to incorporate an automatic transmission, but details are still being determined.

Other component commitments so far include engine and transmission mounts from Pete & Jake’s and a Johnson’s Radiator Works radiator to cool the healthy Ford V8. JHRS will also be supplying their Kinmont-style brakes, which use Wilwood calipers and rotors inside vintage-style enclosures. There’s a new fuel tank from Tanks, Inc., Quick Change rear end from Winters Performance, the rails came from Shadow Rods, and a set of Classic Instruments ready to go in the dash during final assembly.

Needless to say, we’re excited about this new Grand Prize Giveaway project – and even more enthusiastic about the great shops and companies that are getting involved. Work will begin soon on turning this cool coupe concept into a reality, and we’ll be bringing you updates in the coming months as the Streamline team works toward unveiling this fine five-window at the Summit Racing Nationals next summer in Columbus. Stay tuned – this one’s gonna be cool!