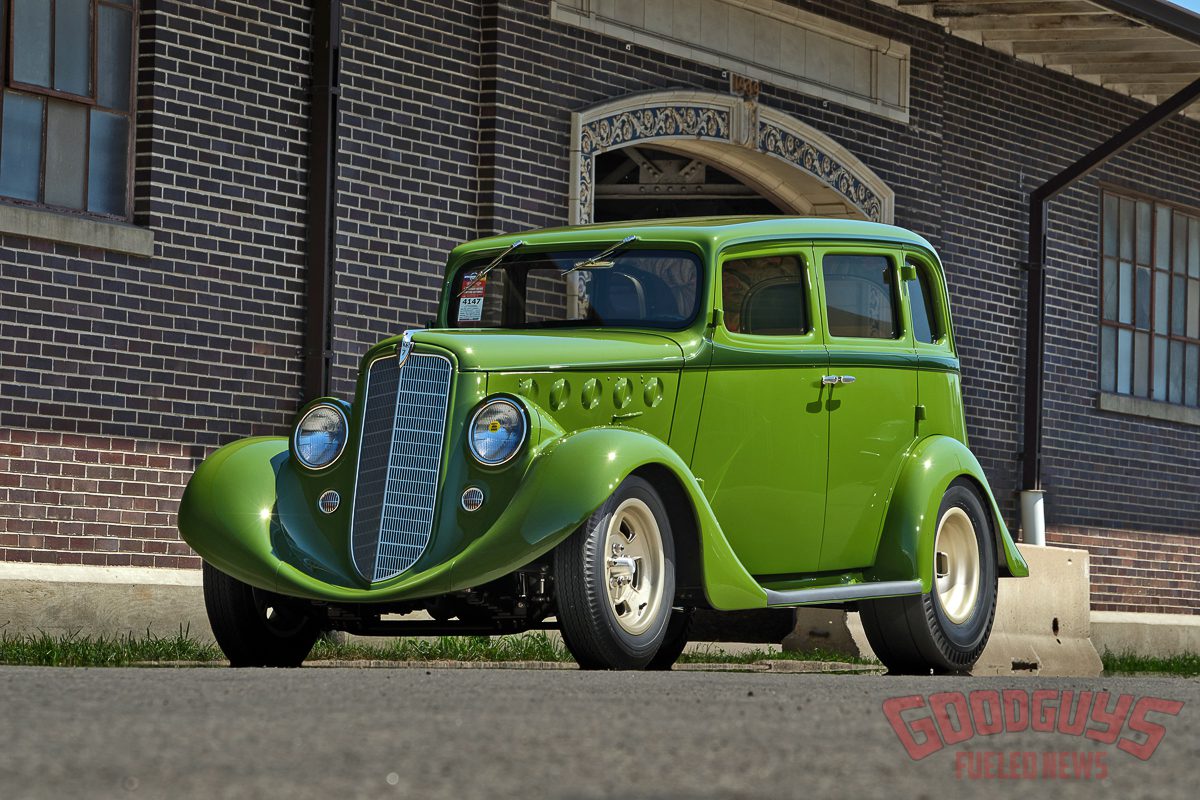 Ron Ernsberger has a thing for early Willys, magnesium wheels, and unusual engines. So, when he showed up at The Tin Man’s Garage with a 1936 Willys sedan, a set of vintage Halibrand magnesium wheels, and a Red Ram Hemi, Brian Limberg and his team weren’t surprised. After all, they were already working on a Gasser-influenced ’36 Willys pickup with an Arias V6 Hemi for Ron, which went on to win the inaugural Al Sloanaker Award at the 2020 Grand National Roadster Show before becoming a 2021 Goodguys Truck of the Year Early finalist. Other than his wheels and engine choice, Ron pretty much left the plan up to Brian and his team. They hit a homerun with the Gasser truck theme and wanted this one to be a bit more hot rod with a bit of street rod refinement blended in. As an overall picture came to shape, the crew set about creating a chassis with an ideal stance for the big ’n little mag wheels. The chassis was straightened and squared, and then boxed with a slight back half in the rear to fit the 10-inch wide rear tires. The front end was treated to a custom 8-inch dropped tube axle and pair of leaf springs to get the intended rake just right. Strut bars were added along with round tubing braces for the ladder bar and trans mounts, which also added strength. With the frame complete, it was time for metal work on the body, which started with all new floors from the cowl to the rear. The most obvious custom touch is the removal of the B-pillar, or more accurately, blending the B-pillar into the rear suicide-opening door. The rear doors were completely cut apart and redesigned, which included making the original door handles and windows to function properly. There’s even a safety latch that only allows the rear doors to open when the front door is opened. The crew cut an inch out of the windshield pillars, which resulted in reworking the entire roof to achieve a lower profile, including designing new drip rails. The wheel openings were modified to follow the diameter of the vintage piecrust slicks. The steel running boards feature fabricated fiberglass covers wrapped in leather, while the front fenders were reshaped to flow better into running boards and incorporate a redesigned chin panel in front. Once the major mods were complete, J. Miller Restorations worked their magic to prep the 1936 Willys Sedan for basecoat of custom-mixed green PPG paint followed by their Vibrance clear so the Gangrene Willys always looks wet. Without a B-pillar, entrance into the front and rear seats is much easier. Customs by Vos was enlisted to complete the interior, starting with one-off door panels wrapped in Italian Eureka leather in an off-white color. The custom seats followed suit and a one-piece fiberglass headliner was fabbed and wrapped in a joyous floral pattern to complement the paint. The dash was left stock and the original handles were replated, while a custom set of gauges was assembled by Classic Instruments to keep tabs on the little Hemi. The Red Ram block and heads were machined and rebuilt by Missile Enterprises. The engine was fitted with a rare Offenhauser three-pot intake topped with a trio of Demon two-barrel carbs. A set of valve covers and carb scoops from O’Brien Truckers were vapor blasted, resulting in a raw, cast finish that stays clean. A Mezerie remote water pump was used to provide enough space so the Tin Man’s team could retain the stock firewall. A custom radiator from C&R provides cooling, while Sanderson headers flow into a custom exhaust built around a 727 Torqueflite transmission. There are loads of other custom touches throughout the car, from the CNC-machined headlight bezels and stainless grille, to the slight difference between the primary custom green color with a gold pearl compared to the beltline molding which received a touch of metallic. The Willys is one of those cars that the more you look, the more you see, which is the sign of a highly detailed build that achieved its goal of blending a vintage hot rod with a classic street rod. Gangrene has never looked better.