Has the Goodguys 1979 Fox Body Mustang caused you to take a second look at these 1980s stallions? The Goodguys Mustang is making the rounds, teasing you with its cool vibe and great proportions, so you may be surprised at how great a start the 1980s Mustang can be for brewing a cool project. What’s so good about these Mustangs, anyway? And, why do they call it a “Fox-body”? Ford’s Fox-body architecture, developed in the 1970s, allowed for a versatile unibody platform they could use for a range of cars from a Continental Mark VI and Thunderbird, to a Fairmont and Mustang. McPherson strut front ends were a departure for Ford, but they marked the beginning of its wide acceptance in American-made cars. If you’ve ever tried to shoehorn a big block into an early Mustang, Falcon or Cougar, you’ll appreciate Ford’s decision to go this route and eliminate those intrusive shock towers in the engine compartment. Supposedly, Ford used the VW Fox as the basis for engineering a “world-class chassis”, and the name Fox stuck. 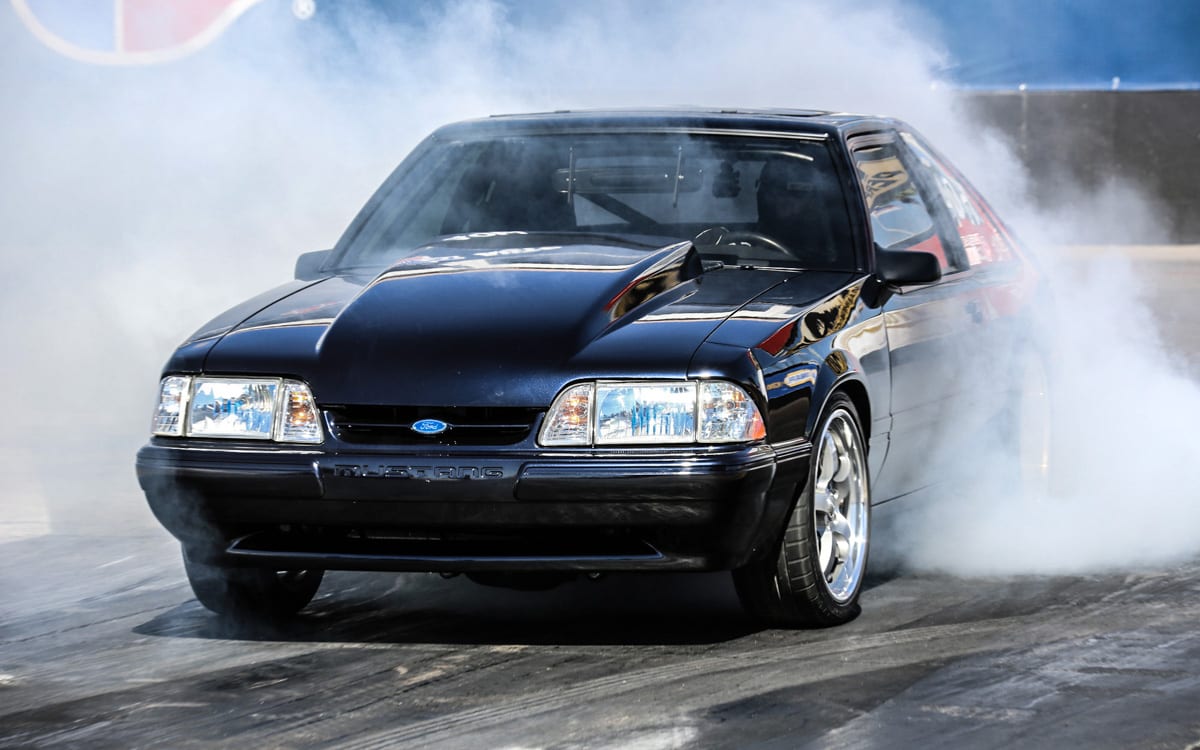 Design-wise these 1980s Mustangs featured the hard-edge styling in vogue at that time. Softened features crept into the Mustang’s body as it progressed through the 1980s, but you have to admit the severe folded edge styling of the early Fox-body Mustangs like the Goodguys Pace Car look really good from our 2018 perspective. Size-wise; design-wise; parts availability including the aftermarket; high production numbers; bodies that include a coupe, hatchback, convertible, and fastback Cougar—these all weigh in favor of good project fodder. And they’re still inexpensive to snag. Are there downsides to Fox-body Fords? Yep. So let’s look at them. Being unibody construction, there is no full frame, but instead, a subframe that cradles the engine and attached front suspension, which ties into the unibody at the cowl. With 300hp 5.0 liter V8s, it wasn’t long before the body took a beating. Sheet metal bracing found throughout the unibody structure was kept to a minimum to save weight and expense, resulting in twisted bodies. Puckers and cracks in the A-pillars and around the rear window are evidence of a body torqued too many times. The torque boxes under the floors can separate from the floors or show evidence of cracks—they are another indicator of a weakening body. There are both kits to replace the torque boxes and also subframe connectors that tie the front frame to the unibody, which help to reduce torquing fatigue. Uneven gaps or misalignment at the hood and door shut lines are yet another visual clue to a twisted unibody.

But! Roadster Shop solved this problem for Goodguys by custom designing a full perimeter chassis for the Goodguys Pace Car. The floors were cut out and the firewall was relocated making it a full custom Pro-Touring build which we understand might be beyond many of our means but the mold has been cast on how to set up a furious Fox-touring machine. Naturally, many readers will opt for more financially friendly suspension solutions for their Fox which could range from lowering springs, Caster Camber plates – a lot of options are available online from a wide range of suppliers.

In the rust department, you need to look no further than the strut towers. If rust is present, they can be repaired or replaced, but factor that into your purchase price. Typical rust prone areas like the rockers, lower portions of the floors, and also around the lower corners of the rear window need to be paid attention to. Basically, you want to start with the cleanest body you can find, unless you’re a great body man and can score your Mustang cheap. Engines are the stout 221/260/289/302/351 Windsor Ford small block, but there are things to look for. The 351 has a higher deck and a different firing order from earlier small blocks. In general, 1973 and earlier engines have a front sump oil pan, while 1974 and later engines feature rear sump oil pans.

On the fuel injection front, before 1994 engines used speed density to determine fuel regulation, while from 1994-on Mass Air Flow sensors were used to determine how much air the engine was taking in. Make sure you know which is which if you’re stabbing a junkyard motor into your Mustang.

You don’t have to be into Windsor small blocks to have a Fox-body Mustang. GM LS engines are finding their way into many a Mustang, and you need look no further than Holley’s LS Fest or Hot Rod magazine’s Drag Week to see numerous examples of this oh-so-wrong yet familiar Ford/Chevy union. Ford produced the Fox-body Mustang through 2004, with major improvements occurring in 1996. The very similar Mercury Capri ran from 1979-1986, and can sometimes be bought for less because not so many are looking for “Capri” on Craigslist, so demand is much less. The 2.3 Liter SVO Mustang ran from 1984-1986, and in addition to the turbocharged 4-banger, it features suspension, brakes and body modifications from a typical Mustang of this era. If you’re into the more obscure and less popular, the Fairmont and Mercury Zephyr are showing up at drag strips because of their cheaper prices and lightweight. Believe it or not, the 4-door sedans are the lightest of this group. The bottom line is that as enthusiast cars increase in value, and cars from the 1970-1990s start looking more removed from today’s angry, busy styled SUVs, you can’t go wrong starting a relatively inexpensive, easy, and fun Fox-body Mustang project. And you’ve got a good roadmap by following what’s been done on the Goodguys Mustang.