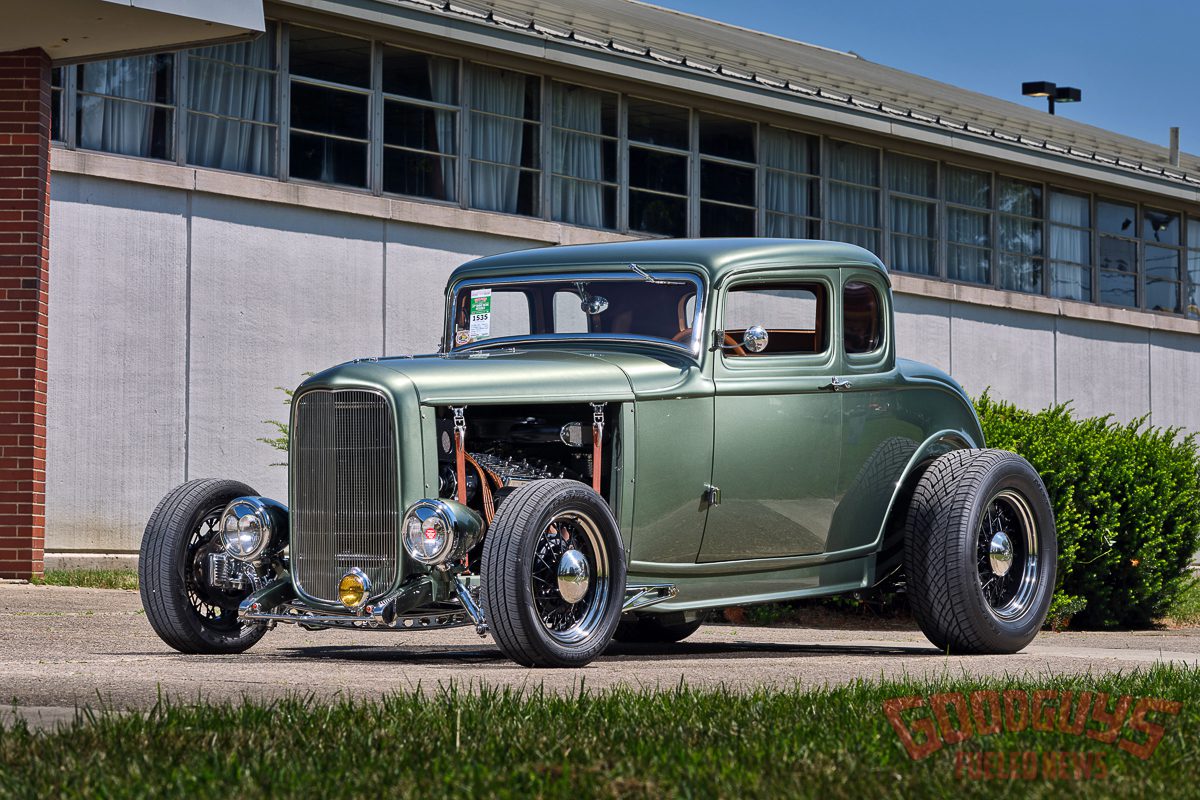 With a casual glance you’re probably wondering why a Deuce coupe with a Flathead was awarded the Chevrolet Performance GM Retro Iron Builder of the Year finalist pick during the 24th Summit Racing Nationals. Upon closer inspection, you’ll notice a unique exhaust port pattern and headers, then finally see that those aren’t really finned heads, rather a stealthy valve cover assembly bolted atop a set of Chevy small-block heads!

But wait – why is there a distributor in the front? Just what exactly is going on here?! Dan Timmons got the idea to mask the Chevrolet Performance ZZ4 crate engine in this ’32 Ford five-window coupe after his buddy Leonard Wood (as in Wood Brothers Racing of NASCAR fame) gave him grief about running a big-block Chevy in a previous Ford roadster build. So, when Dan started on the coupe, he decided to get creative about disguising the engine. Of course, it doesn’t hurt to have a shop full of machining tools at your disposal, plus years of NASCAR experience, as Dan owns Nitro Manufacturing in Moorseville, North Carolina. The project started with a partial body and doors from New Age Motorsports followed by a lot of custom aluminum work on the firewall, floor, hood and drip rails. The custom gas tank is covered with a louvered plate highlighted by a custom rear bumper. Once complete, the body was carted over to Detroit Speed where they sprayed the custom PPG green finish. Dan and the crew at Nitro Mfg. built the entire chassis starting with a set of Deuce rails, an aluminum front axle and custom suspension followed by a 9-inch Ford with quarter-elliptical springs in the rear. A set of Wheelsmith 16- and 18-inch wires are wrapped in Nitto tread with chrome V8 enter caps. The custom touches and machine work continue inside as the Nitro team whittled the trick pedals, steering wheel, mirrors, brackets and door handles. An American Autowire harness, Moal Bomber gauges from Classic Instruments, and a Vintage Air system were installed before Paul Atkins crafted a custom seat and panels and covered them in a comfortable leather. Getting back to the front drive distributor, Dan remembered a Summers Brothers conversion assembly offered decades ago to put the distributor up front on a Chevy V8. (In racing engines, having the distributor driven off the front of the cam helped achieve more accurate ignition timing at higher rpm.) When he couldn’t find an original kit, he designed and machined his own version – all in the name of adding to the Flathead appearance and confusing his friend and hero, Leonard.