In 1964, Ford developed an engine that promised to dominate NASCAR. At its core was a side-oiler 427, an engine that already led the pack. But instead of mounting the camshaft in the valley as its overhead-valve brethren did, it mounted two: one in each cylinder head. Though bigger and heavier and beset with a complex chain-drive system, the design eliminated a bunch of reciprocating weight – tappets and pushrods – giving the engine greater high-speed potential. While commonplace to the point of pedestrian anymore, Ford’s single-overhead-camshaft (SOHC) was revolutionary at the time and Ford planned on dominating the market with it. And it would’ve had the company planned to sell at least 500 vehicles with said engine, a prerequisite for NASCAR to recognize an engine viable for its so-called stock car racing program. But Ford didn’t and everybody else (that being Chrysler since Chevrolet dropped factory race backing the year before) rightfully protested until NASCAR outlawed the engine on what seems to be reasonable logic. 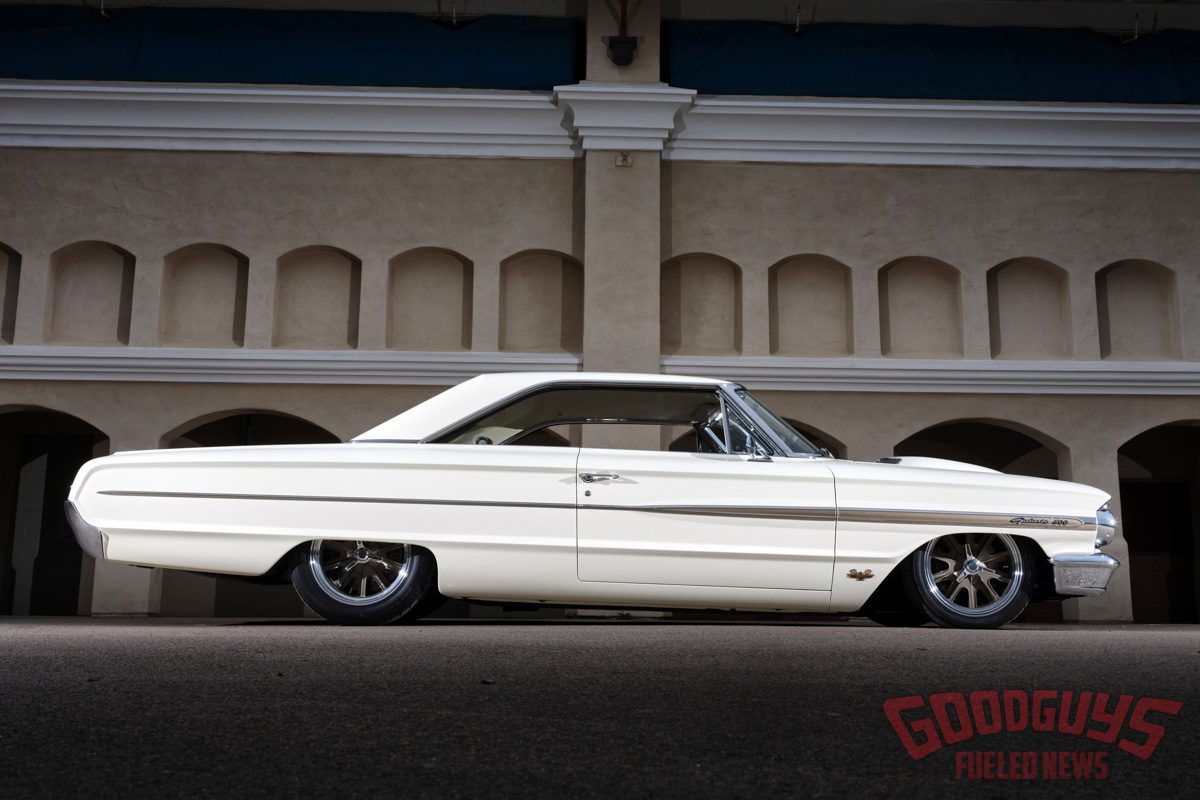 But what if? What if Ford actually built enough cars to meet NASCAR’s homologation requirements? It’s a question that a handful of enthusiasts have answered by building faithful examples of cars that Ford could have – and may well should have – built. But few have risen to the level that Bob Matranga achieved with his fantasy Ford.


We don’t know who got the peanut butter in the chocolate, but this car existed as one of those era-correct Pegasus unicorns prior to Bob’s stewardship. Joe Kugel at Kugel Komponents bought it from a collection of muscle cars in an Arizona warehouse. He took it to a So-Cal Speed Shop open house, where Bob saw it. Oddly enough, it wasn’t the combination as much as the engine that appealed to Bob, who said he wanted it for a project that he hadn’t thought of yet. He bought the car and basically shelved it while the crew at Matranga Hot Rods finished up his Brute Force ’55 Chevy.

Meanwhile, they caught wind of a similar combination, a ’64 Galaxie that Ford itself built with a Cammer as an engineering mule and to appeal to NASCAR owner Bill France. The idea resonated with Bob and his crew, who began to fantasize about his Galaxie as a homologation special – basically a vehicle built in numbers sufficient to be considered a production car – but with a contemporary twist. 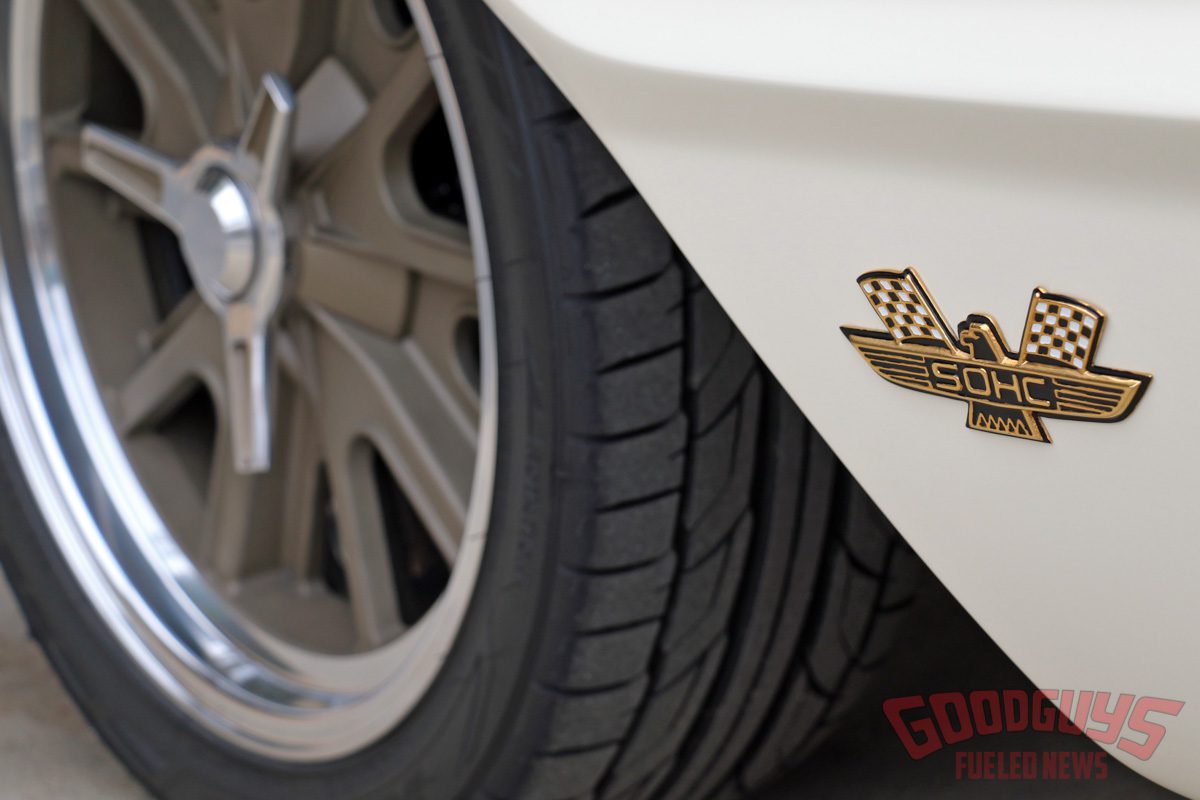 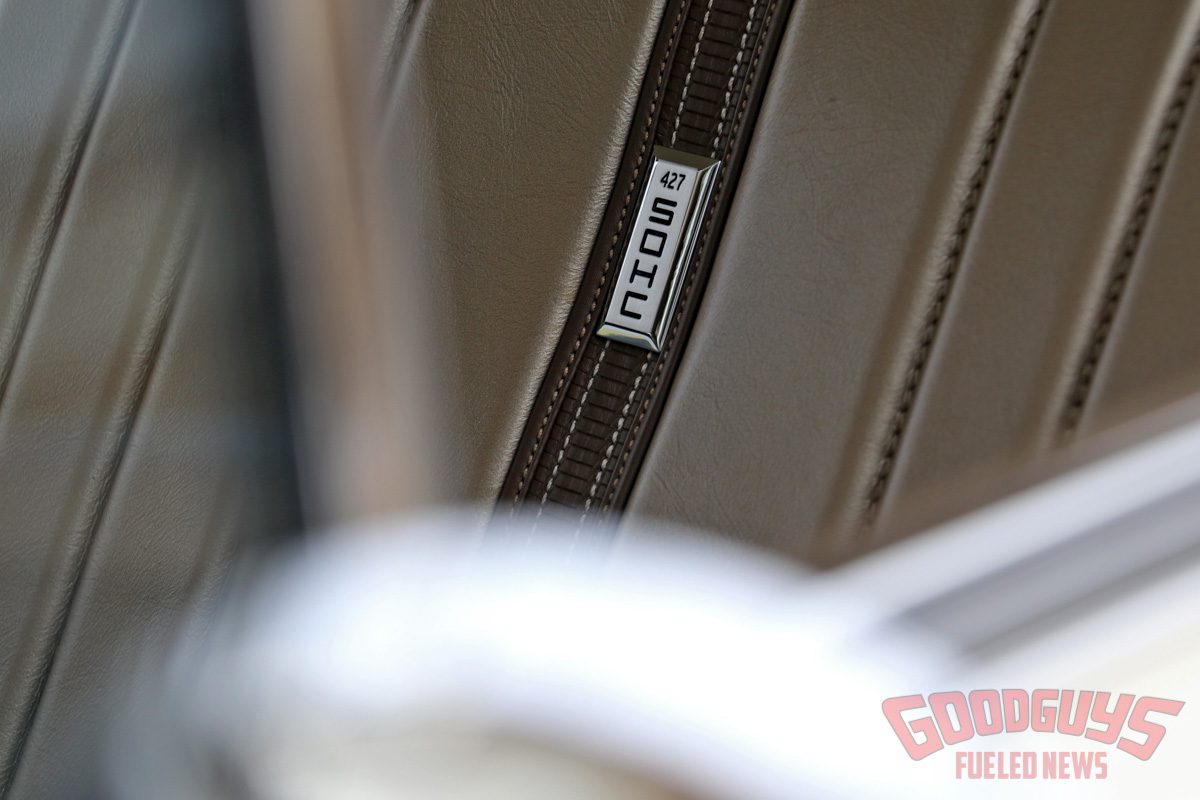 To give the car a fighting chance with Cammer power, Bob’s crew based the project on a Roadster Shop Fast Track Stage III chassis. This one differs from standard by incorporating RideTech air springs, a Woodward Racing steering rack, and brackets for the FE-based engine. Though restored, the engine remains basically stock in the sense that Ford built it that way. It features the optional dual-quad manifold with a pair of Edelbrock carburetors. Paul Hattrup milled off the badge from the R-code air-filter housing and EVOD Industries machined a replacement with SOHC in lieu of 427. Paul also built the headers and exhaust system with Spintech mufflers. Bill Brakman fabricated the radiator shroud and modified a coolant-expansion tank to fit the unique application. A Centerforce clutch couples it to a Tremec T56 transmission. 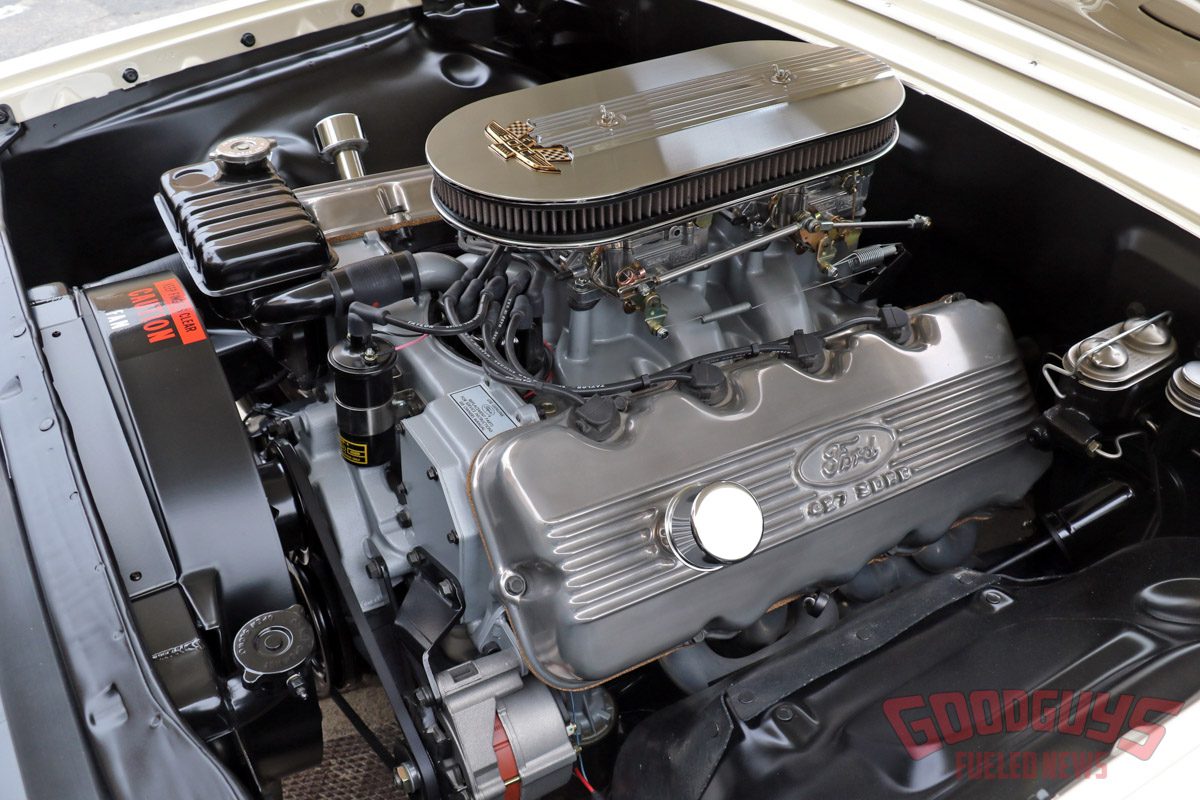 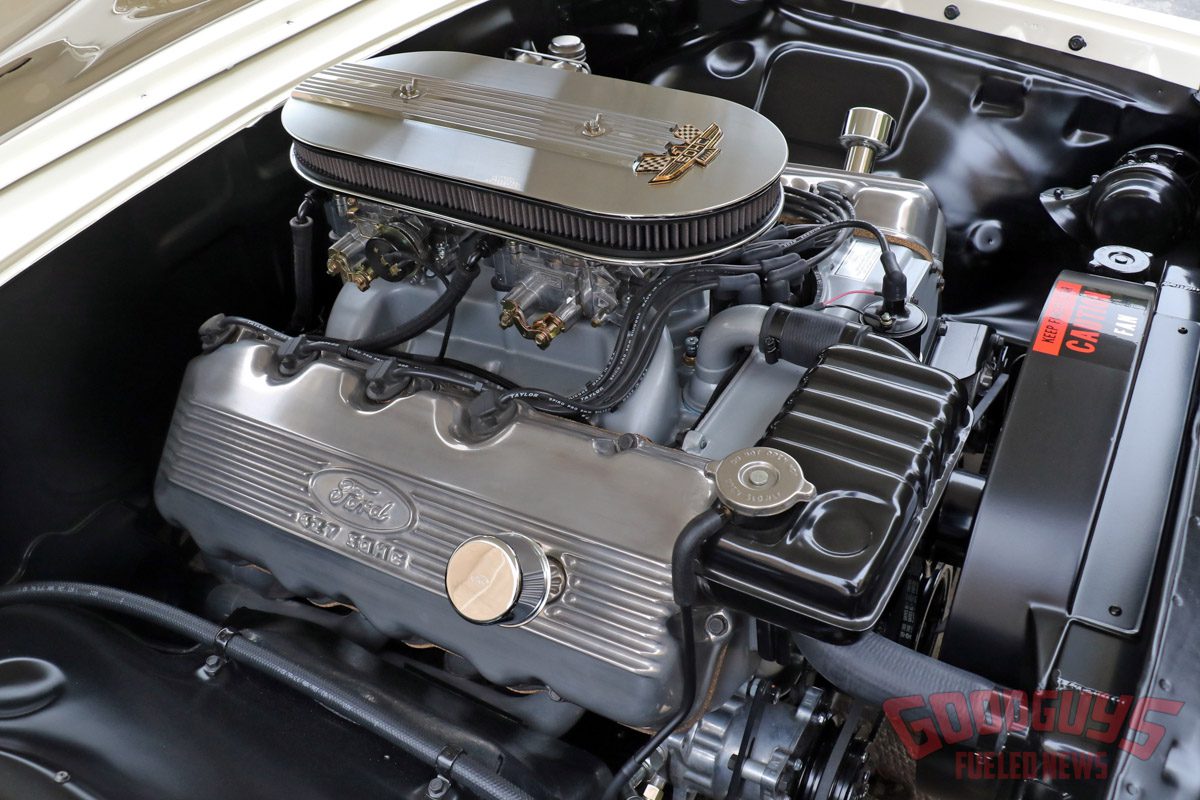 The body remains almost entirely stock. The only significant changes: shaved fender trim and the hood, which Bill Brakman made by fabricating a teardrop from steel in the likeness of the fiberglass ones Ford laminated for its lightweight cars. Mick’s Paint tightened the gaps and brought the sheet metal to a higher grade of finish before covering it all in PPG‘s modern formulation of the Wimbledon White that clad the car since new. 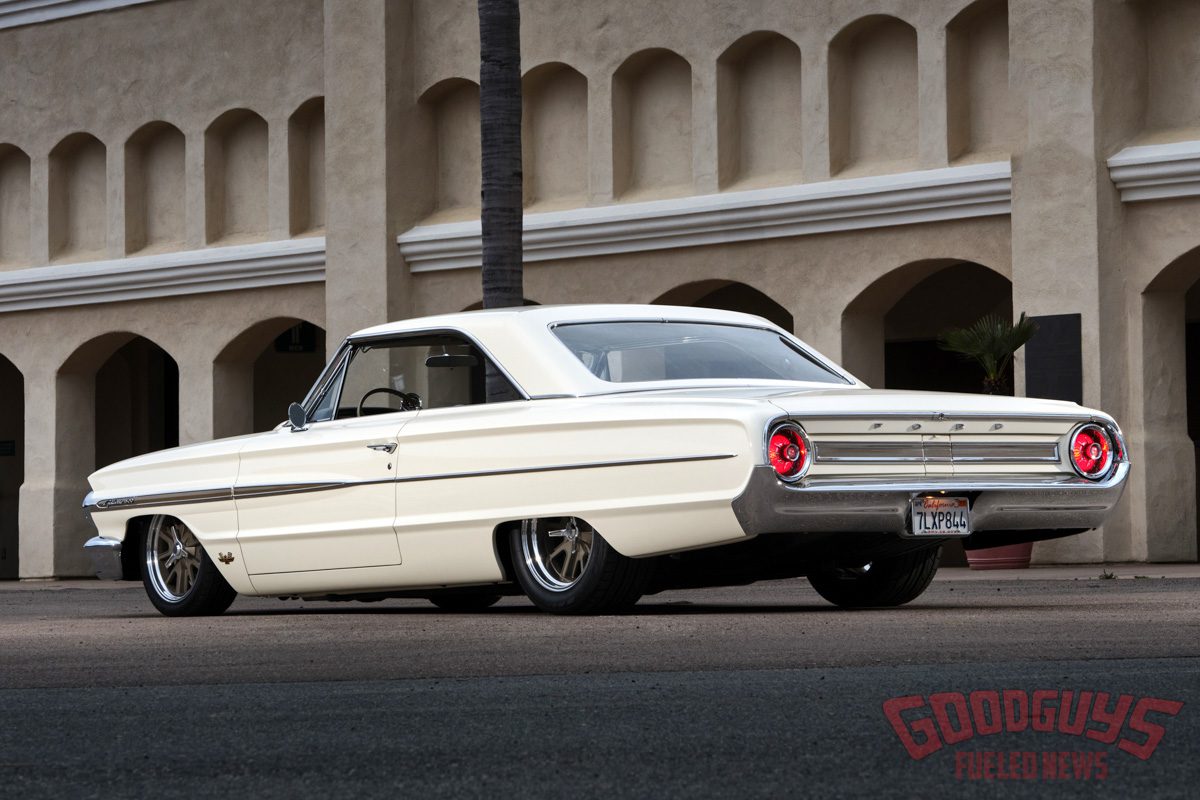 Oddly enough, the bumpers underwent the most surgery. Bill tucked and narrowed them, streamlining the front by reshaping it at the corners.

Chris Brown designed the interior to look stock. The factory Selectaire crotch cooler merely serves as a plenum and switch panel for the climate-control system. The Vintage Air unit that feeds it mostly eliminates the glove box, but Bill Brakman fabricated another to exploit the space that remains. Ford riveted a disclaimer badge to the glove-box doors on its lightweight production cars; Chris redesigned one to better suit this application. 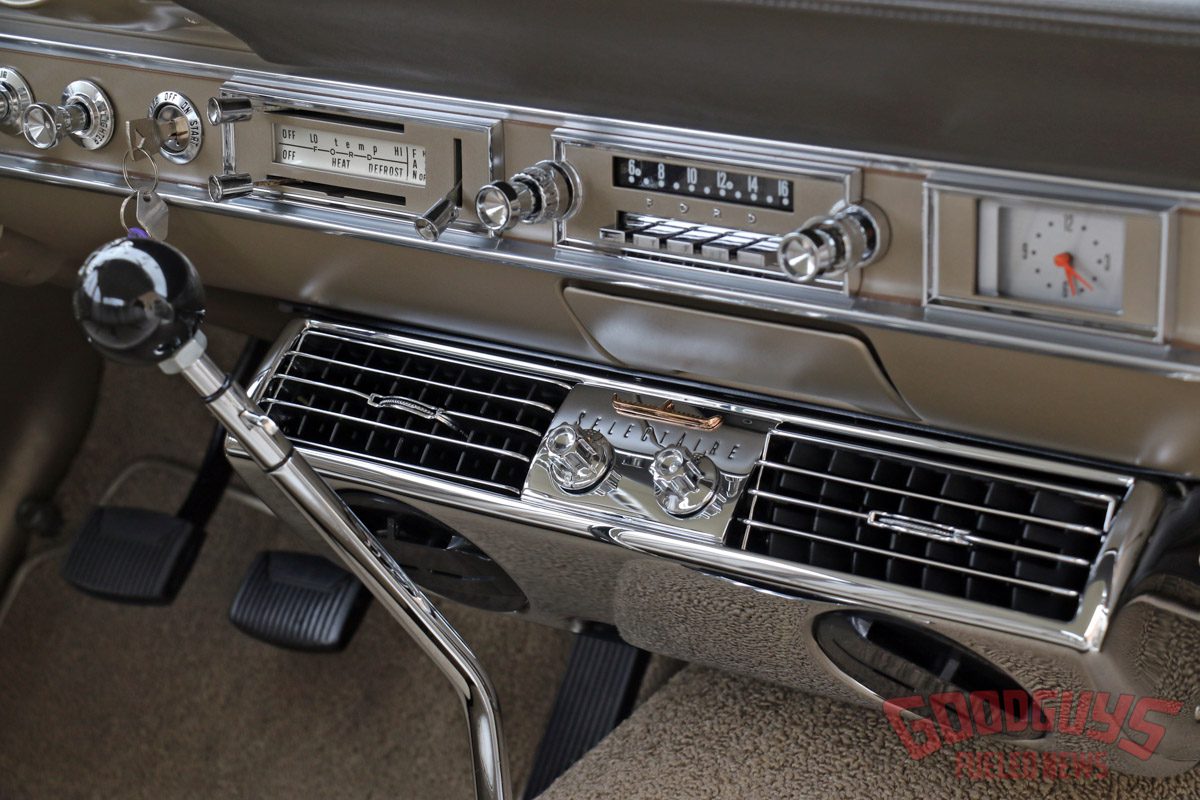 Bill modified the factory steering wheel with a GM broach to make it fit the Flaming River column. That wheel features a horn button designed by Chris Brown, machined by EVOD Industries, and painted by Chris. Classic Instruments updated the gauges with electronic mechanisms, duplicating the factory fonts and finishes. Phil Whetstone detail painted the dash insert and Ryan Rivers machined the knobs for the newer components to resemble the factory ones. 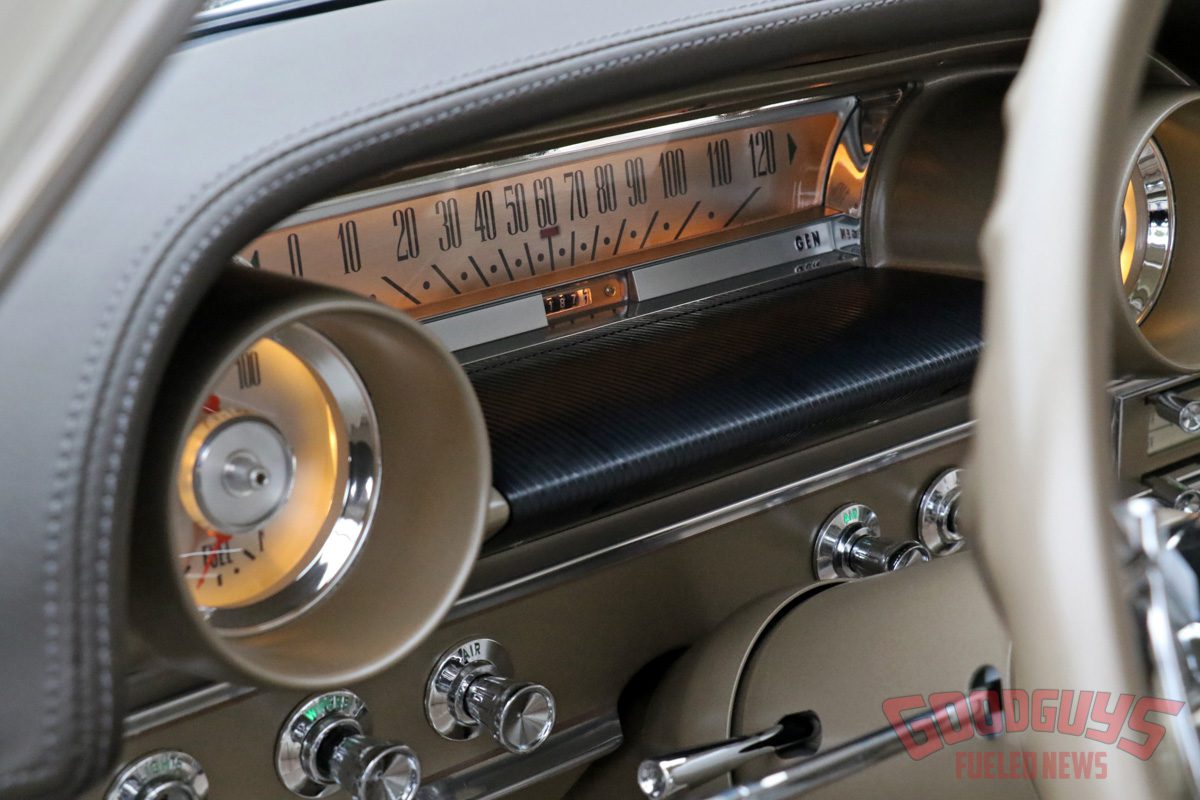 Gabe Lopez at Gabe’s Custom Interiors replaced the seat springs with elastic webbing and carved foam to give the seats the level of support that modern butts like ours have come to expect. He trimmed them and the rest of the interior in leather that SMS Auto Fabrics dyed to match Ford’s pearlescent beige and cream vinyl. The door panel trim looks stock but it isn’t; it’s extrusions from Krist Kustoms that Gabe’s hand-bent for the application and repeated in the trunk. EVOD Industries machined the 427 SOHC badges that adorn the seat and door panels. They chose ET Mags‘ AC III wheels for their likeness to the Halibrand wheels used on Shelby Cobras. Though they measure 18-inches in diameter, they had to trim the Baer Extreme 14-inch rotors and relocate the calipers to fit within the wheels. The 7-inch fronts run 225/45/ZR18 and the 10-inch rears 295/45/ZR18. They used the tire sidewall rather than wheel diameter to create the rubber rake as an homage to how they did it back then. But what if? What if Ford actually homologated the Cammer? It likely would’ve changed the engine landscape forever. Whatever the case, the one Bob Matranga owns would still likely be the nicest of them all.