Quad-cab pickups with two rows of seating have been ubiquitous on American roads and highways for decades now, but we likely have Volkswagen to credit with the concept. The German automaker began offering a Double Cab version of its Type 2 pickup back in the late-’50s, long before the extended-cab platform gained traction with domestic manufacturers.

The VW Double Cab was based on VW’s versatile forward-control Transporter, which had previously been available in panel van, passenger van, and single-cab pickup configurations. The utilitarian Double Cab simply extended the regular pickup’s cabin and used a single van rear door on the passenger side to access the rear bench seat. It was a handy, compact setup, but never a big seller in the U.S., making Double Cabs rare today – and especially desirable among VW fans. James Steele has been a Volkswagen guy ever since his father bought him a ’70 Beetle for $300 when he was 15. “I have two loves in my life – my wife and Volkswagens,” James joked, noting that he and his wife went on plenty of dates in high school in that first Beetle.

Like many VW enthusiasts, James always thought Double Cabs were cool, though he didn’t specifically go hunting for this one – you could say it found him, instead. A friend mentioned an “old, ugly Volkswagen truck thing” that a neighbor had stashed in her Georgia shed. It turned out to be a 1964 VW Double Cab, a proverbial barn find that had been tucked away since 1980. “I was hooked when I saw the picture,” James said. “I had just completed a restoration on a ’66 convertible, so I really wasn’t looking for another project. But when a unicorn falls in your lap, you want to buy it!”

It took months of negotiations with the owner, a woman who had brought the pickup to Georgia from Colorado in the late-’60s. “Every time I went to look at it, she fell back in love with it,” James said. She finally relented and agreed to sell on two conditions: that James continue to call the truck by the name she had given it – Gordon – and that she would be the first passenger to ride in Gordon once he was restored. James agreed and brought Gordon home, starting a 13-month rehab that resulted in this cool and classy custom that draws admirers from across the automotive spectrum. Stance is key on any custom but seems especially critical with Volkswagens. Rusty Bottom Garage in Smryna, Tennessee, helped to get things down with a narrowed adjustable beam front axle and flipped spindles, along with offset drop plates in the rear. Combined with 15×4.5- and 15×6-inch Empi Fuchs wheels wrapped in Kumho 175/55 and 195/65 tires, the mods provide a low, comfortable cruising altitude. Braking comes from Porsche 944 front disc brakes and VW Type 1 rear discs. As you might expect, a stock engine was not going to provide enough power for this pickup’s new custom stature. Steve Cole at Cole’s VW set James up with a 2110cc engine he had built with the help of Steve Sands at Pro-Flow Performance. The mean mill has a Scat crank and rods, Mahle cylinders and forged pistons, an Engle camshaft, CB Performance Street Eliminator heads, Pertronix ignition, and dual Weber IDF 44mm carbs. A Vintage Speed stainless steel exhaust helps the healthy four cylinder breathe and sound better. The engine is connected to a ’68 swing-axle transmission with a Kennedy clutch. James turned to his friend Shane Braggs for help with the Double Cab body. Shane performed the minimal rust repair, installed a new bed floor, and massaged everything back in shape to prepare for paint. Originally white, James opted for an early Mango Green finish in honor of the decades the pickup spent on that Georgia pecan farm. The body is dressed up with Deluxe stainless trim polished by Grumpy’s Metal and front and rear pop-out safari windows. Tigerwood slats finished by Ken Hippensteel enhance the cargo bed, which is easily accessible thanks to the hinged bed sides – a distinctive feature of the VW pickup design. 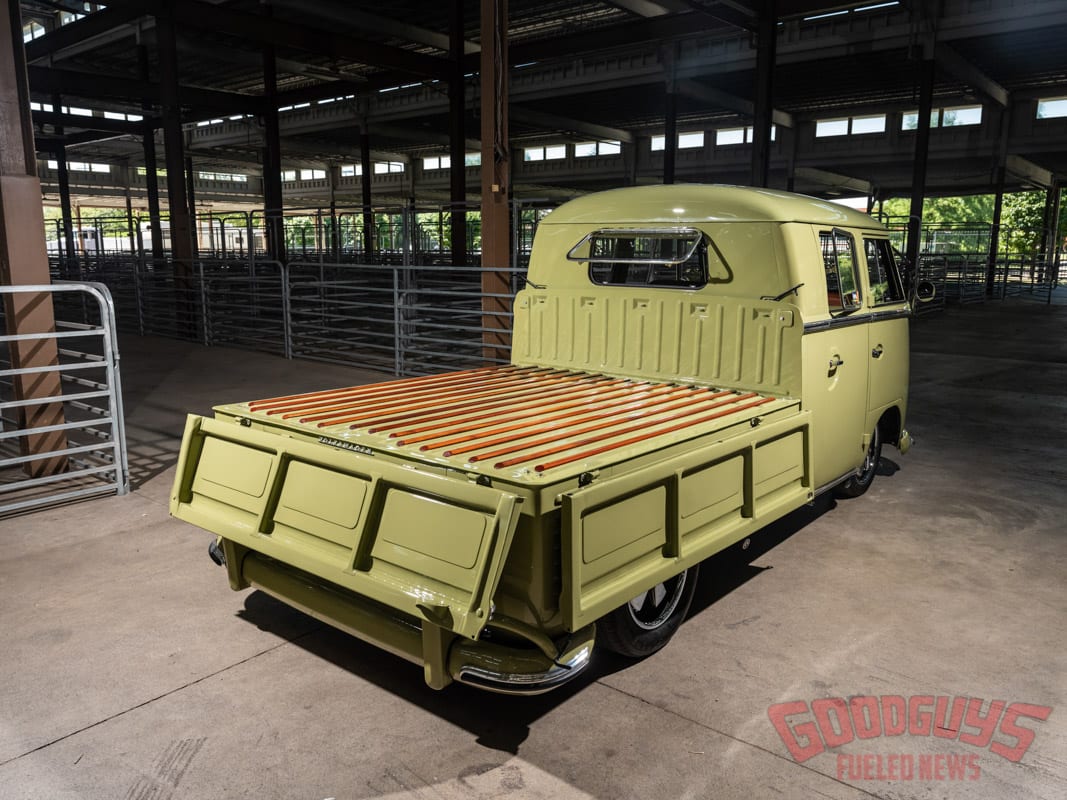 The blend of original elements and custom touches continues inside the double-size cabin. The painted dash and restored gauges are stock, while the black three-spoke wheel is from a barndoor van. Clay Poole covered the split front bench seat and original rear in saddle-colored vinyl from Sew Fine Interior Products, complemented with two-tone door panels and headliner incorporating tan tweed inserts that match the square-weave carpet. A Vintage Speed Quick Shifter adds a performance-minded touch, while a Retro Sound stereo with Memphis speakers provides tunes. James credits Clay Poole for the Double Cab’s assembly and the obsessive attention to detail that gives the truck an exceptionally clean and refined finished appearance. Combined with the vivid color and just-right stance, the Volkswagen garnered a lot of attention from all types of enthusiasts in Columbus – including renowned painter Charley Hutton, who made the Dream Car selection. 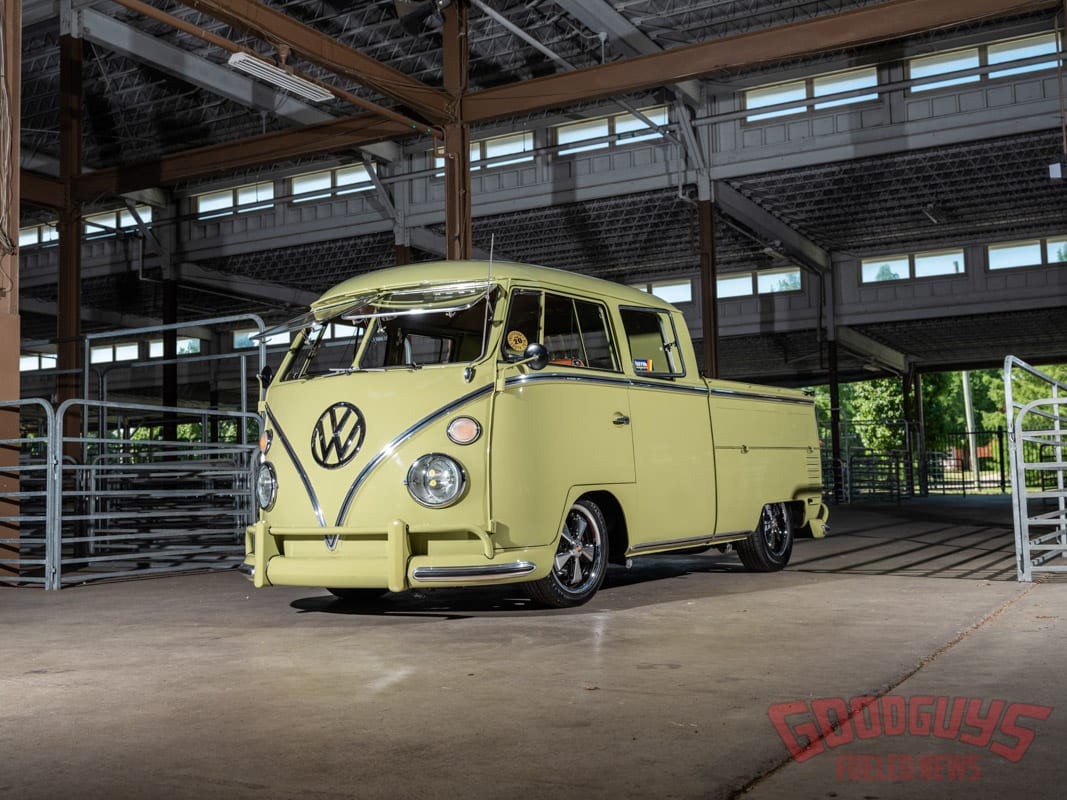 From barn relic to Dream Car, this Double Cab has experienced a dramatic transformation. Perhaps nobody is more aware of that than the previous owner. James kept his promise and returned to her farm to give her the first ride in the refinished pickup back in late-2017. There’s little doubt she was happy to see Gordon on the road again, looking fantastic, and generating smiles wherever he goes.