One of the hottest trends in the hot rod and vintage vehicle scene in recent years has been ’90s-style sport trucks. This not only includes the red-hot ’88-’98 Chevy and GMC OBS trucks, but also involves older trucks built in a ’90s-period style. Alan Button’s ’87 Chevy Custom Deluxe is one custom pickup that perfectly captures the ’90s vibe, and with good reason: that’s when Alan actually built it! Yes, this bitchin’ yellow Squarebody is a bit of a time capsule from a quarter century ago, from the vintage Boyds wheels, to the lowered stance, shaved trim, and bright paint. It’s one of those rides that proves if you keep something long enough, it’s sure to come back in style. The truck dates even further back for Alan – way back to late 1986 when he ordered it new from his local Chevrolet dealer. “I ordered this truck with the options I wanted,” Alan says. “I ordered a Custom Deluxe because I didn’t want the body side moldings that came standard on the Silverado. So basically, I ended up with a Silverado pickup in a Custom Deluxe body.” The Silverado-style extras Alan checked on the order sheet included the quad headlight package, gauge package, tilt column, power windows and locks, cruise control, intermittent wipers, and a dome light. He also opted for a V8 engine and automatic transmission. “This was my daily driver for about 10 years,” Alan says. “Then I decided to blow it apart and made it into the truck I wanted it to be.”


That vision included an even smoother body, so Alan removed the front side-marker lights and filled the holes, filled the stake pockets, built an aluminum rolled rear pan, and extended the bed sides in the rear to match the custom pan. He also smoothed and extended the tailgate and built a fabric-covered aluminum tonneau cover. Once everything was as slick and clean as he wanted, he sprayed the body in that warm PPG Wheatland Yellow finish. 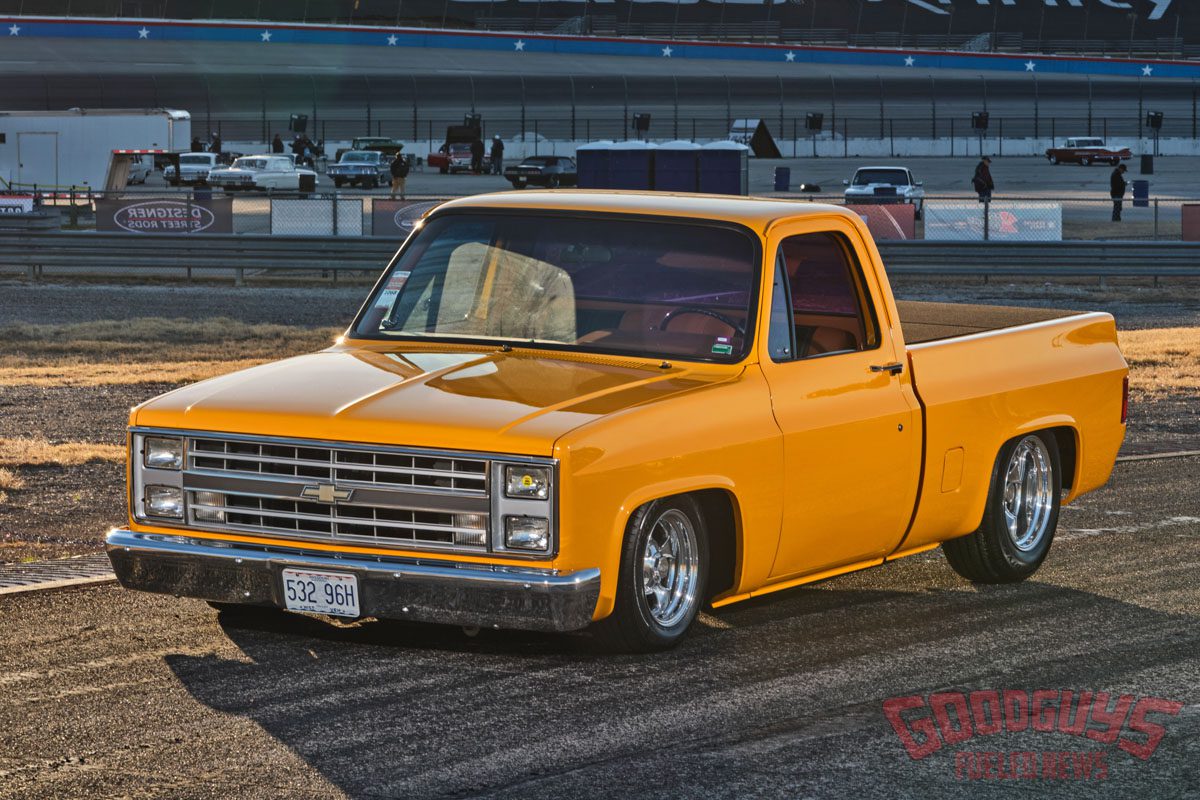 Alan initially lowered the truck the old-school way, using cut coil springs and modified lower control arms (modeled after those sold by Eric Vaughan) in front, and a flipped rear axle with lowering blocks in back, with a C-notch in the frame for clearance. When he freshened up the chassis around 2005, Alan upgraded to RideTech tubular control arms and spindles, along with air springs at all four corners. Alan is an old-school hot rod guy at heart, so it was natural for him to go with a big ’n little wheel and tire combination to emphasize the truck’s down-in-front stance. Those 15- and 17-inch Boyds Vintage billet wheels date back to the late-’90s and are a great reminder of an era before larger 20s, 22s, and 24s came into vogue. The billet rollers are shod in thick-sidewall BFGoodrich 215/65/15 and 275/60/17 rubber. Under the hood is a conventional small-block V8, just as Chevrolet intended back in 1987. Alan has left it stock, from the OEM throttle-body injection, to the factory exhaust manifolds and ignition. The dual exhaust flows through a pair of Flowmaster mufflers. The TH350 overdrive automatic transmission is also stock – original, simple, and reliable. Alan originally drove the truck with its stock interior but sprang for custom upholstery in the late-’90s using the era’s favorite fabric: tweed. He admits the tweed didn’t age particularly well, so a few years ago the truck went to Don Taylor for a cabin refresh that included Hydes Allante material covering a ’90s Chevy truck bench seat, door panels, and garnish moldings. Don also covered the dash in leather, though it still retains the stock Silverado gauge package and the Carriage Works billet aluminum instrument trim Alan added back in the day. After a quarter century, the clean ’87 Chevy Custom Deluxe still turns plenty of heads – at least that’s what we witnessed as it cruised through the Goodguys 2022 Spring Lone Star Nationals event grounds in Texas. That bright Wheatland Yellow finish no doubt stands out among the subtler hues worn by many more modern builds, but the appeal of this pickup extends beyond the vivid hue. There’s something to be said for the clean body and classic simplicity of this back-to-basics sport truck. The ’90s style it represents may be coming back in vogue, but we’d argue that a truck this clean and cool will always be in style.