Small block performance options for a 305 V8? Stop laughing. What if the current migration of next gen muscle (’73-’87) really takes off which we think it will? What can GM car guys and gals who can’t afford a new LS motor do for more power?

Consider for a moment that 1987 was 30 years ago. Let that sink in for a few seconds. Time waits for no one and the Goodguys Rod & Custom Association recently announced a forward leap to the year 1987 for show entries. Fox-body Mustang fans and General Motors V8 rear-wheel drive adherents can now rejoice as 1987 and earlier G-body and F-body rides now have a legit classic and custom road to drive down into 2018 and beyond. The late Seventies were not the best of times for American V8 performance but things were looking up moving into the mid-Eighties. The Chevrolet 350 cu-in TPI V8 made its debut as the fuel injected future, but the de facto V8 across the entire General Motors corporate panoply of automotive brands and models was the oft-maligned 305 cu-in small block. The corporate 305 was installed by the millions in everything from F-body Camaros and Firebirds to any number of G-body variants from the sleek Monte Carlo and boxy Malibu to sport utilitarian El Camino and its GMC Caballero counterpart. Performance was climbing up out of the doldrums and the 1987 305 V8 was up to 150-170 horsepower in the Caprice, 180 horsepower in the Monte Carlo and crested the 200 mark with 215 horsepower in the IROC Camaro – not so far behind 225 horsepower 350 cu-in V8. While 200-225 horsepower might not seem like much in today’s world of 800+ horsepower production muscle cars, 305 numbers were on par with the 1987 Mustang and 140 horsepower 318 cu-in V8 in the Chrysler Fifth Avenue. Squeezing some more performance out of a decent running 305 is possible, but the small bore long stroke engine design has its limits. Conventional wisdom says the best path to 400-plus horsepower G-body and F-body motoring is to yank out the 305 and start over with a 350 or any number of available LS-variants but engine swaps never go as easy or inexpensive as they appear on TV and forums are littered with unfinished engine swap threads. A solid 305 with some proven upgrades can deliver 250 horsepower, wicking things up to 300 horsepower and 300 lb-ft of torque is achievable and power adders can open the window to even bigger numbers. 300 horsepower in a 3000 or so pound car makes for 13-second/100 MPH quarter miles and plenty of power to have a wicked good time in an F-body or G-body rear-wheel drive modern classic. Untold numbers of 305-equipped F-body and G-body cars came with a wheezy single exhaust and pellet-filled catalytic converter. Uncorking the factory pipe is a great place to find performance and a no-brainer especially if the exhaust has rusted into oblivion. Headers, high-flow mufflers, and a modern catalytic converter can bring performance gains and provide a V8 stereo soundtrack to compliment that mint Metallica cassette. Choose from any number of bolt up systems for DIY glory or turn to your local tubing and muffler shop for help. And even though all those trips to Five Guys and/or In-and-Out may quickly negate any performance benefits, a lighter aftermarket exhaust can help drop a few pounds of body weight. 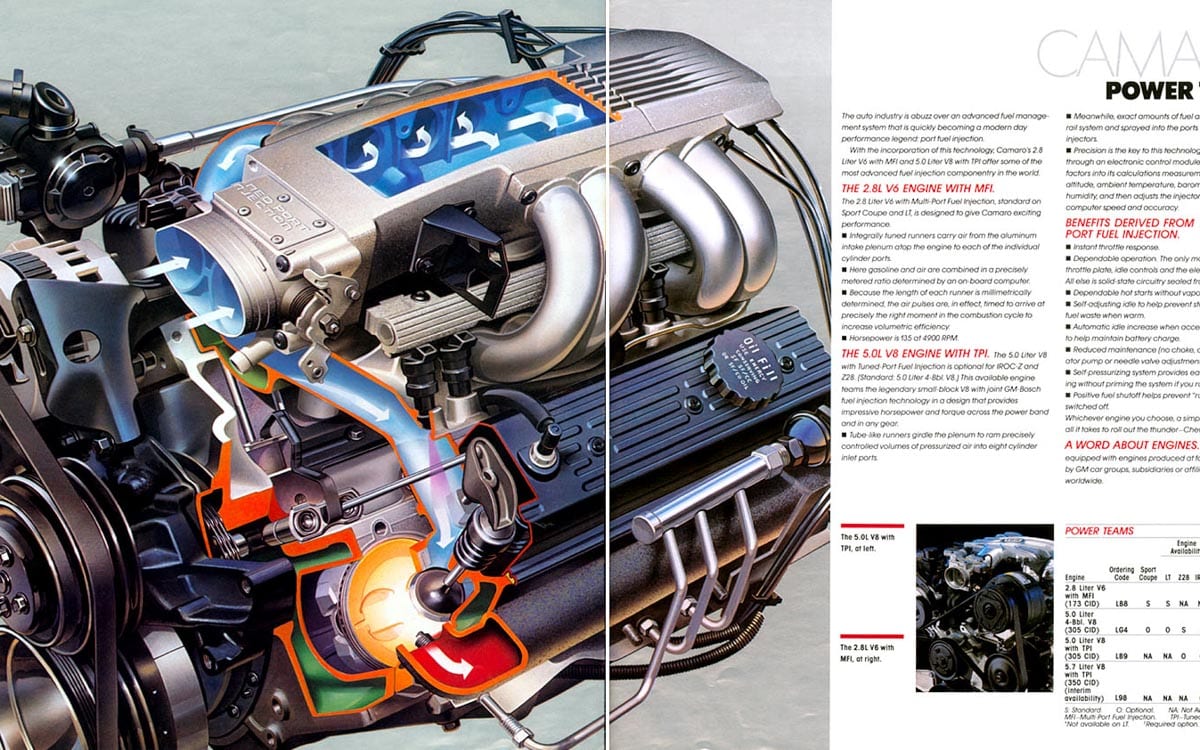 Stock 305 cu-in carburetors ranged from a miserly 2-bbl to a Rochester 4-bbl. Stepping up induction with any number of carburetor and intake combinations can bring more power and improved throttle response especially when combined with the aforementioned exhaust upgrade. Throttle body fuel injection systems that bolt up in place of the stock carburetor are another modern innovation to consider. Screwdriver-toting carburetor devotees may disagree, but tunability is a great advantage of the electronic fuel injection. Intake and injector modification combined with ECU fine tuning can yield power gains. Tuned Port Injection or TPI made its debut in 1985 and found its way into Camaros as electronic fuel injection set the small block Chevrolet on the path to horsepower success it enjoys today in numerous LS-trims.

BUMP STICK TO THE HEAD 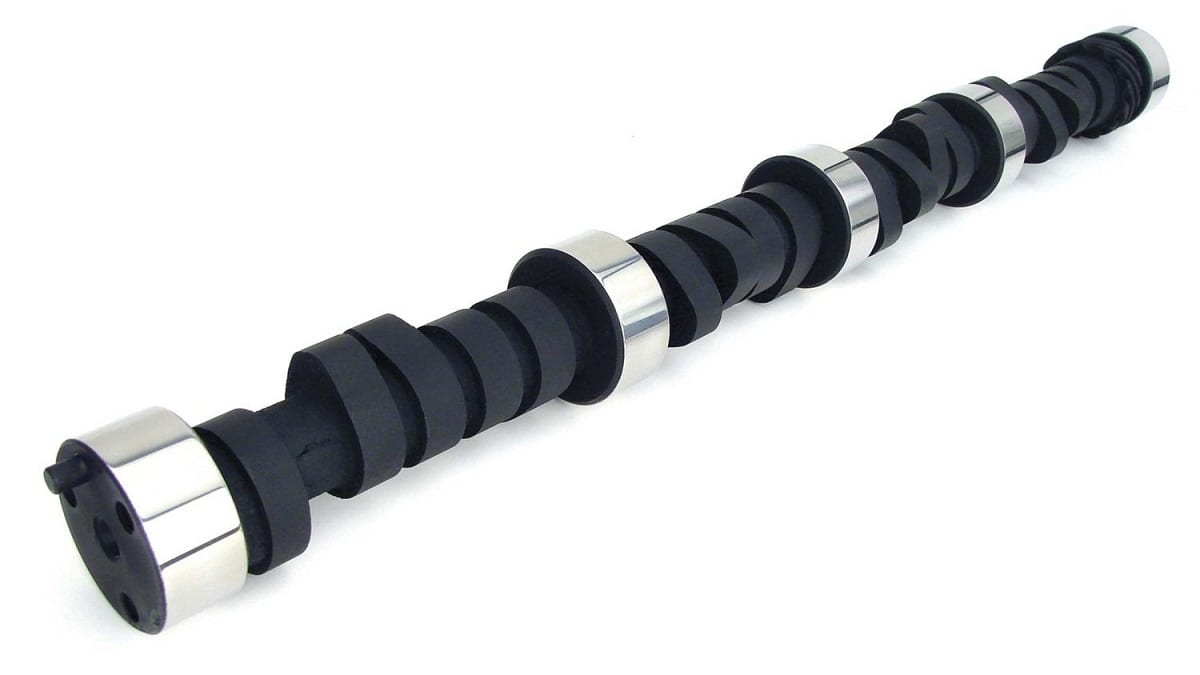 Now that the engine has some room to breathe consider a camshaft swap and cylinder head upgrade. Modern casting technologies have made it easier and more economical than ever to simply bolt up a set of fresh heads and World Products offers an improved version of the original with its S/R cylinder head. Match up the head swap with a camshaft ground to take advantage of induction and exhaust mods to get the most out the setup. If the 305 is backed up by an automatic transmission a streetfighter-type torque converter can help keep the engine in the right powerband for launch and hookup. A cylinder head swap, matched camshaft and torque converter can help deliver more of the low-rpm torque and punch off the line that the 305 is already good for. Stab and steer V8 rear-wheel drive motoring is a throttle mash away. Strong spark and the right spark plugs won’t bring massive horsepower increases but neglecting the ignition system will certainly hurt performance. Don’t expect giant numbers from ignition upgrades but do keep spark plugs, wires, and HEI distributors in mind when navigating through the performance improvement landscape. The stock HEI distributor is a solid performer with room for improvement. Start with a hotter onboard coil, fresh spark plug wires and a quality set of spark plugs in the right heat range. Get technical with some ignition curve fine tuning. Springs on the weighted centrifugal advance can be changed and adjustable vacuum advance units are available from Crane, MSD, and Accel. Consider a fresh high-performance unit If that HEI distributor has seen its better days. If the power is still not enough, you’re thinking that there’s nothing to lose, an engine swap is on deck, or if you specifically want to push the absolute limits of 305 V8 performance in Captain Chaos style superhero garb then there is no clearer path to big performance and destructive glory then time-tested power adders. Nitrous oxide systems are an economical if not slightly dangerous shot at tire smoking greatness. Superchargers and turbochargers are tried and true if not more expensive routes to volumetric efficiency and giant power. The good news is that nitrous oxide systems, superchargers, or turbocharger setups can be swapped onto the next small block Chevrolet if and when the 305 expires in a blaze of wide open throttle glory. Plan ahead and proceed at your own risk.

Photos courtesy of General Motors and the manufacturers Billet Door Handle Cups from A...