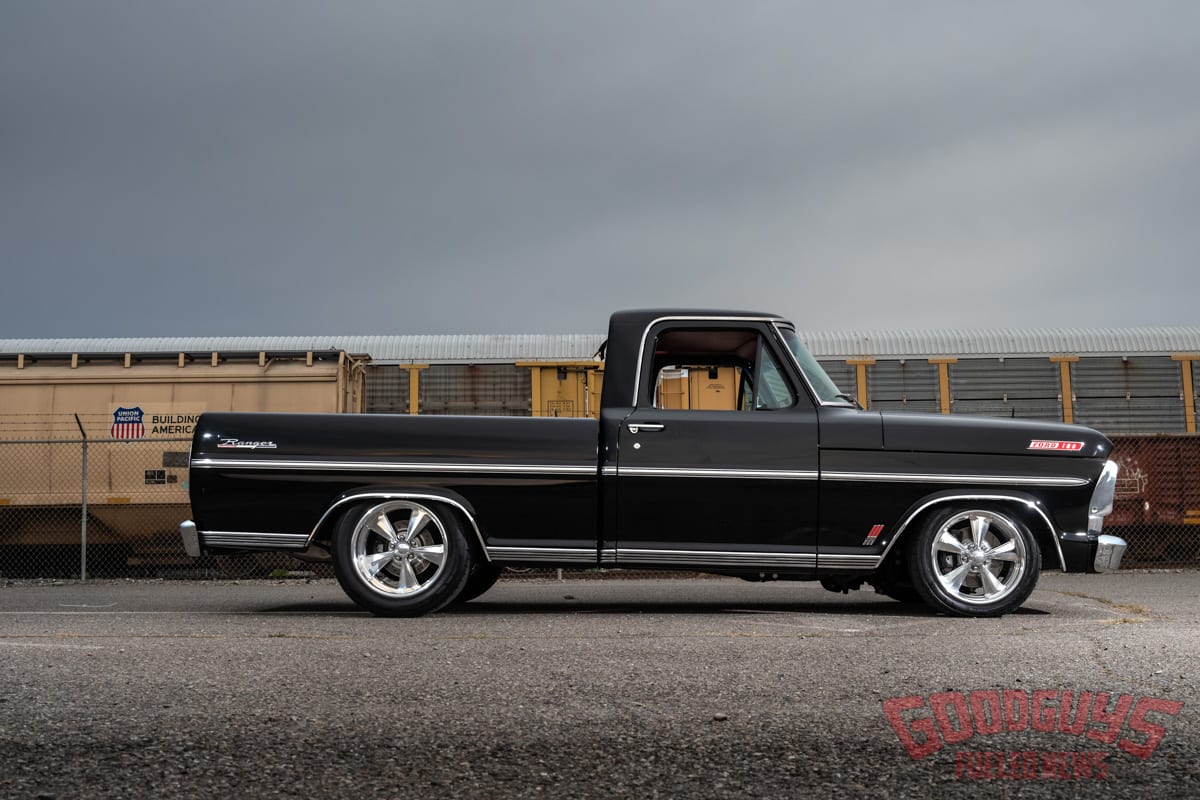 For many of us, when the last child moves out of the house our attention turns to owning a lifelong dream car. Sometimes that means restoring a project that’s been in the garage for too many years. For others, like Scott Thurston, it means recreating the truck you rode in as a child and drove in high school.

Scott’s dad owned a 1969 Ford pickup, black with a red interior. Scott always wanted to own a similar ride, but life can get in the way and dreams are often delayed. For Scott, though, that dream is now a reality. Once the Thurston nest was empty, the quest began to recreate the black and red truck. Pickups, especially back in the ’60s and ’70s, were still primarily work trucks. That means most 50-year-old survivors are pretty worn, if not long relegated to the scrap heap. Scott found a 1969 Ford Ranger F100 in Oakland, California, brought it back to Washington, and began transforming the survivor into the truck he wanted. The black beauty rides on a stock frame with a Ford Crown Victoria front suspension and a 9-inch rearend that now rides on top of the leaf springs thanks to a Fatman Fabrications axle flip kit. The Crown Vic also supplied the front rack-and-pinion steering and the disc brakes. Curtis Speed wheels (17×8 in the front, 18×12 in the rear) are fitted with 235/45/17 front tires and 295/45/18 rears. The truck is powered by a 398c.i. Ford V8 from A.J. Kautzman that features an Edelbrock carburetor and heads, Ford Motorsport valve covers and air cleaner, and a Duraspark HEI distributor. Scott gained some better highway manners by connecting the Ford engine to a GM 700R4 four-speed automatic overdrive transmission. Waste gases exit through Stan’s Headers and a Flowmaster exhaust. Scott kept to his plan for maintaining the color theme of his father’s old truck by having Mike Walters at Rainier Customs get the body in shape and finish it in black PPG basecoat/clearcoat paint. All of the stock brightwork was retained and either restored or replaced to shine brightly against the body. Keeping up with the black-and-red theme, the original bench seat was recovered in red leather by Hi Tech Upholstery in Auburn, Washington. Red door panels and carpeting complete the interior. A restored stock dash hosts Dakota Digital gauges while a GT steering wheel sits atop the stock column. In an era of often heavily modified cars and trucks, Scott’s slick pickup is a prime example of a stock-bodied cruiser that’s enhanced by a great stance, updated suspension and drivetrain, and a few select custom details that allow Scott to reminisce about the past while enjoying more modern comfort and power.