A 1948 Willys Overland Jeep Truck is normally found on farm duty, not the AutoCross track. But as we have learned over the years, people in hot rodding have big imaginations. It’s part of what makes rodding and racing so fun. A classic Willys will always be revered as one of the most influential pieces of machinery in American history. The Willys brand played a pivotal role in wars and farming then on American drag strips. This 1948 Willys Overland Jeep Truck however is nothing like any of those. It’s a classic with a female’s touch. After all, most girls have always had a love affair with Jeeps. 17-year-old Kaycee Howe is not like most teenagers. She had no desire for a Jeep Wrangler or SUV to take her to school and back. In fact, Kaycee initially wanted to build a 1948-54 Chevy pickup. Then a strange thing happened. While in a hotel with her dad and brother, the Barrett-Jackson auction was on TV. A Willys pickup just so happened to roll across the block and right then and there Kaycee’s mind was made up that she had to have one. Of course, her family tried to talk her out of such nonsense, but she was stubborn and persistent. After a little research, her dad figured he could buy/fab whatever pieces he needed to fix one. They found this 1948 Willys Overland Jeep Truck in Augusta, Kansas with straight fenders on eBay for $600. After retrieving it, Kaycee, with the help of her dad Daniel started tearing it apart. With the help of her brother Josh, they both worked on prepping the body for paint. It was painted purple because, well, it’s her favorite color and it’s not a common color you see on a vehicle. Now, dad was dead set against painting it purple which is ironic since he can’t even see purple being that he’s colorblind. What’s even better is that since he bought the paint, he now takes all the credit for picking the color you see here. LOL. When it came time for the interior, it was Kaycee’s time to shine. The door panels were cut and made from scratch, as well as the gauge bezel, armrests, and the speaker boxes. New vintage gauges were added, and A/C will be added soon. There’s not much available for a Pro-Touring/AutoCross Willys chassis. So, a call was made to their friends over at Schwartz Performance. To make it AutoCross friendly, ten inches was taken from the stock 4X2 wheelbase and the front track was narrowed seven inches. This allows them to run 335/30/18 tires in the rear and 315/30/18 in the front on widened, lightweight XXR 521 wheels. Baer brakes, RideTech coilovers, and a Moser rear end with rack and pinion up front help finish off the setup. 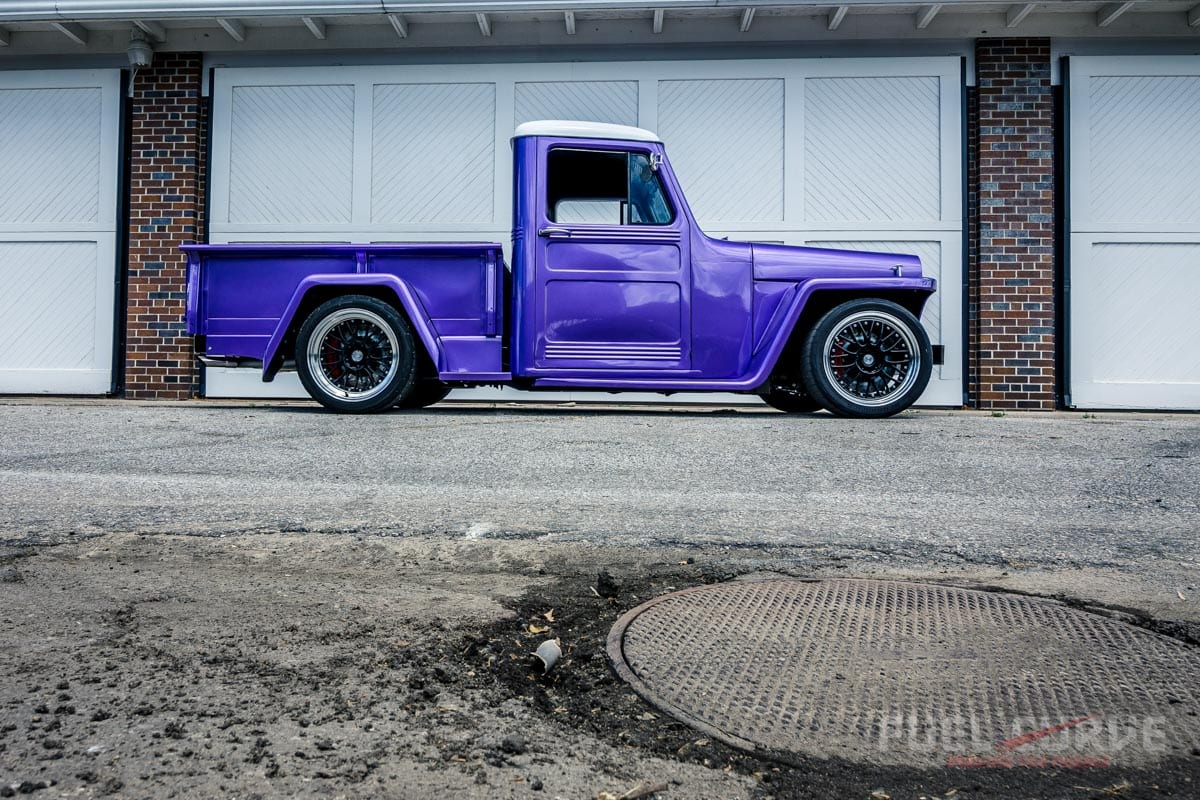 Hundreds of hours went into the body to make it looks as good as it does. The trans tunnel was modified to accept the T56 gearbox as well as some fabrication under the hood to stuff a 4.9 liter LS V8 with an LS3 cam. A Velocity intake was added as well as a March serpentine kit. PSI Conversions handled the engine harness, PCM, and DBW Pedal. Now that the Willy’s is finished after its two and a half year build, it’s time for her to enjoy it and she has! She’s entered the truck in some AutoCross events and the results are positive. With more track time will come quicker times but we can tell you the Schwartz Performance chassis mods work like charm keeping it flat in the twists. Even more excitement is forthcoming as Kaycee will have the honor of showcasing her 1948 Willys Overland Jeep Truck in the Quite Ride Solutions booth at SEMA this fall. Go find her and give her a fist bump. She’s a cool next generation racer and rodder!