Like a lot of hot rodders, the automotive experiences Hal Burrows had as a teenager have had a significant effect on adult his rodding pursuits. “My dad allowed me to drag home a 1932 Dodge coupe when I was a junior in high school,” Hal says. “Eighteen months later I had my first hot rod!”

Far less common than the Fords or Chevys, Hal embraced the idea of an unusual Dodge rod – and returned to it when he got older. “After putting three kids through college, I started collecting 1932 Dodges,” Hal says. “Found a roadster first, then two coupes, and finally the convertible.” You could say the convertible found Hal, as the previous owner contacted him in search of running board patterns for a 1932 Dodge, knowing that Hal had several. “I told him I had some and the price was ‘I want to be first on your list when you sell it.’ Three months later he called – too big of project for him.” The car – if you could call it that – was beyond rough. “It was cut in half by a farmer, but he kept the back portion,” Hal says. “The rumble seat lid was covered with an old refrigerator skin. My car buddy who was with me took one look at it and thought I was crazy to think of putting it back in one piece. There were approximately 150 rust holes in various sizes. But the main structure was workable and both doors and supposedly the convertible top irons were there. “As an architect, I always list out my goals for a project,” Hal continues. “First, the car was to be ‘accepted’ by the original car crowd as classy, but it also needed to be a hot rod in stance and look. Second, I wanted a color scheme of at least four colors. The main body color would be light blue but would change color subtly as the light changed. Third, I wanted to do as much work on the car as I could but sought advice and wisdom from several car-building friends. Fourth, I wanted the car to be stock in appearance, but ‘remove the factory defects,’ as a friend always says. And fifth, it had to have a Hemi engine!” Achieving the hot rod stance Hal wanted started with a boxed and pinched original frame, which was outfitted with a dropped and drilled front beam axle located with Pete & Jake’s hairpins, and a four-bar rear suspension with coil-overs locating the 8-inch rearend. A Vega steering box was added, along with Buick finned drum brakes with Wilson backing plates. The 15×7- and 15×6-inch steel wheels were ultimately topped with Lancer wheel covers and wide whites. The Hemi power goal was checked off by having M&S Engine Works build a mid-’50s-era 354c.i. Hemi using an aluminum dual-quad intake with Edelbrock carbs, a Joe Hunt mag-look distributor, Hot Heads headers, and chrome valve covers. Hal dipped into the GM parts bin for the alternator and 700R4 automatic transmission, and had a custom radiator built to keep things cool. 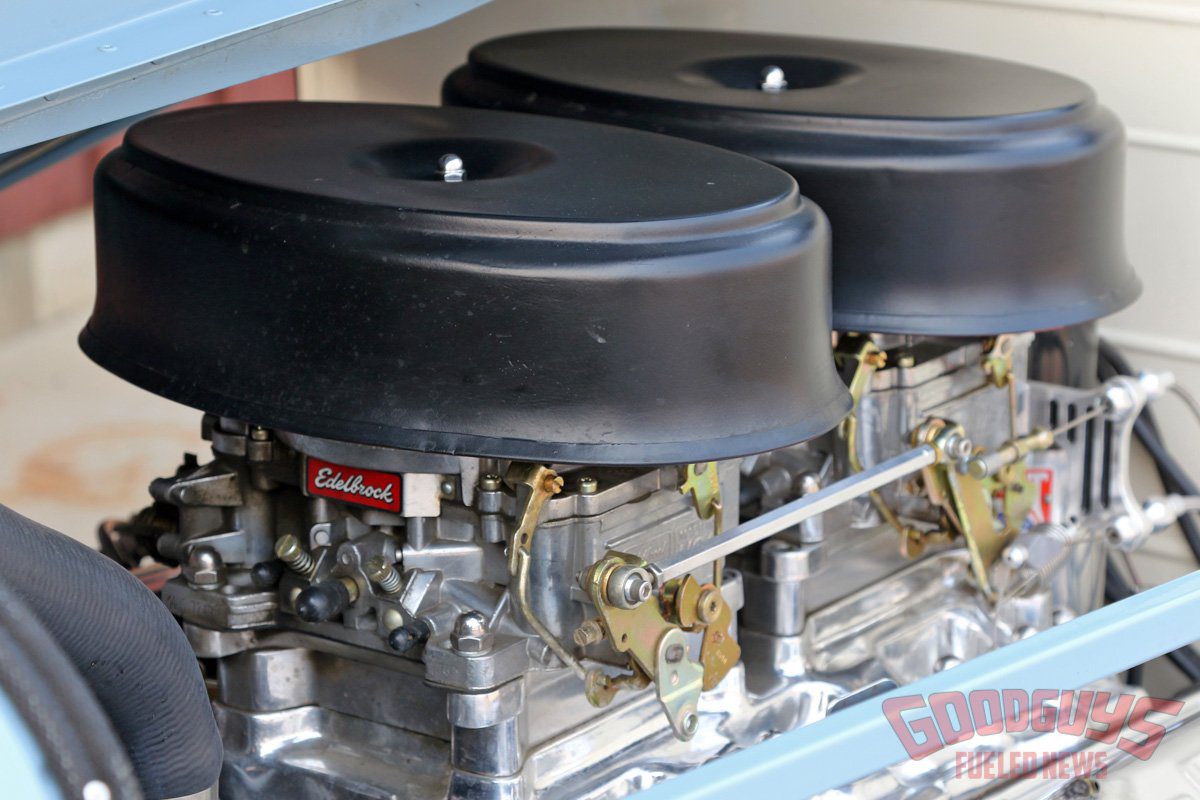 Hal says reuniting the rear half of the body to the front and lining all the panels up appropriately was one of the biggest challenges. “I had to build a floor structure and brace the door posts and cross brace before fitting it together,” he says. Steve Gerig helped to supervise the bodywork, which, in addition to the rust repair, involved shortening the gas tank cover 3-inches, widening the rear fenders, reshaping the fronts of the front fenders and adding a raised ridge line to them, and modifying the bottom of the grille shell. Hal also converted the rumble seat to a trunk, added ’37 Chevy truck headlights, and custom taillights built from ’37 Ford buckets with custom-built lens housings to resemble ’36 Chrysler Airflow taillights. The trim spears on the door handles, headlight and taillight housings were built from silverware from the estate of his in-laws. Hal says he ended up using ’32 Plymouth convertible top bows, which were modified to fit, and ultimately had them covered with black cloth. The hood top received some hot rod louvers, and the body was delivered to Steve Gerig Auto Body to be finished in light blue Axalta paint. 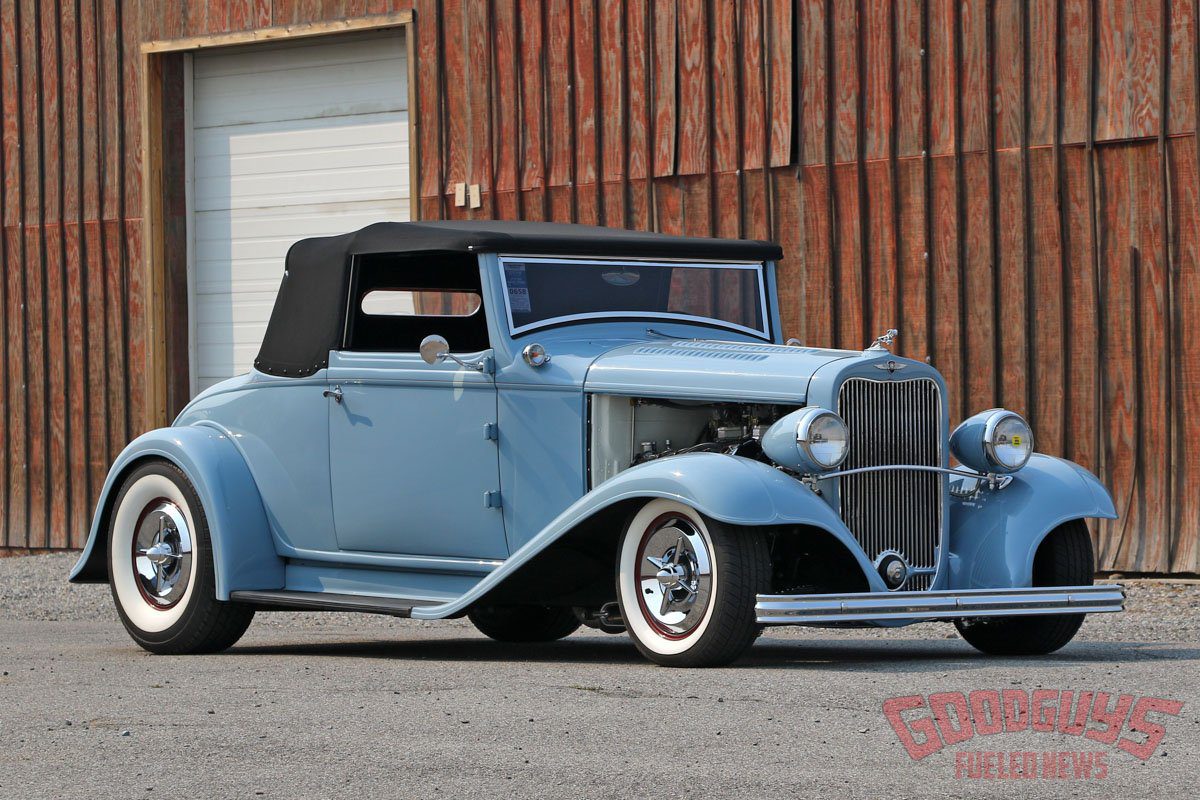 The cabin incorporates a lot of custom elements, like a package tray under the dash to house Vintage Air controls and vents, and custom garnish moldings built from ’37 Ford pieces. Classic Instruments were used in the dash, while a Lecarra banjo-style wheel topped the Ididit column. Electrical connections were made using an American Autowire harness. The beautiful brown leather was stitched by Resurrection Upholstery and covers a Glide bench seat and custom door and side panels, all done in a clean, classic style. Hal finished the 1932 Dodge convertible in April of this year, shortly before we saw it for the first time at the 2nd RaceDeck Salt Lake Nationals. He and his wife Susan had racked up 5,000 miles already by the time they got to Spokane and say they love meeting and visiting with people who ask about the car when they’re on the road. “We had a few breakdowns on the road as we broke the car in,” Hal says, “but we were blessed every time with good endings.” You could say the same about the car itself. From a forlorn assortment of parts, it has been reborn into a clean, classy, homebuilt hot rod that turns heads wherever it goes. We can’t imagine a better ending than that.