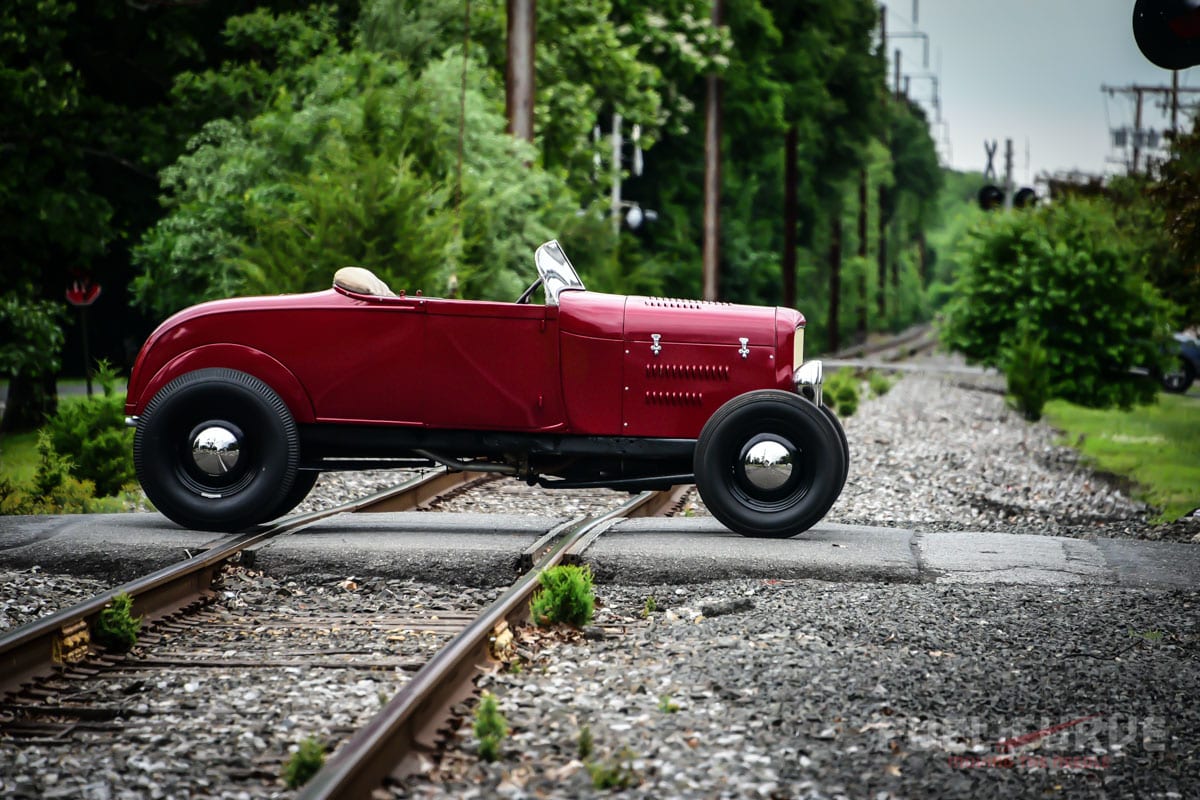 While on the east coast earlier this year, I had the pleasure of shooting Pat Pryor’s 1929 Ford A-V8 roadster – a car built with old world style and methods. Even though he’s a younger person, he’s got the whole “respect tradition” thing down Pat – no pun intended. “I built this roadster five years ago,” Pryor said. “I am really into California hot rods of the 1940s era. So, I decided to build my 1929 Model A Roadster in the transitional post-war period of the mid to late 1940s where custom touches meet land speed.”

Looking at the car, he succeeded in pulling off his vision. You saw cars like Pat’s on dry lakes when the boys got home from Europe and the Pacific Theater in 1945. Pat had help along the way. He started the project when he had his own hot rod shop and was holding metal shaping classes in New Jersey. About halfway through the build he reluctantly closed his shop necessitating a move. His friend Jim Loughlin agreed to help out and let Pat keep the roadster at Loughlin’s “Ray’s Hot Rods” shop – also in Jersey. Before the transition, Pryor worked on the car when he had spare time – a familiar scenario for most rod shop owners. He made great progress over a relatively short span, crafting a lot of the car by his own hand. He elaborated on that process during our photo shoot. “Reviving old custom tricks that haven’t been seen in over 50 years or on any modern builds, I added a recessed license plate, wheel well skirts, custom upholstery with a poofy seat, custom windshield and a high headlight bar. Other custom touches that are still popular include the filled grill shell, custom hood, shaved door handles, shaved gas tank and the airplane cockpit style dash.” “The only thing I regret is I should of added an auburn dash. Since I had a metal shaping shop I made all of my custom parts and patch panels. The hand made parts of the car include the custom windshield, the wheel well skirts, hood and hood sides, cowl aides and doors, the handmade dash and other small details. I made almost eight inches of the lower body all around the car. Other things I made that I made are the seat frame and seat upholstery, the top irons and top upholstery complete with Izon glass side curtains.” “Once I got the car to Ray’s Hot Rods, Jim Loughlin helped me to finish off all of the details.” During our photo shoot at a friend of Pat’s stately mansion, Jim came along. I could tell by their rapport that Pat and Jim were true hot rod guys. They race their cars, the drive their cars and they thoroughly abuse them. Isn’t that the fun part of hot rodding? This roadster is on point. Its very rare you see one built in this style and tradition any longer. And some of the retro cars you do see these days are “fauxdster’s” (or fraudsters if you prefer) made to look old but not Pat’s A-V8. And he and Jim are not hipsters trying to look cool by doing trendy shit. They are just cool hot rod dudes who have a penchant for the style and substance of a bygone era.